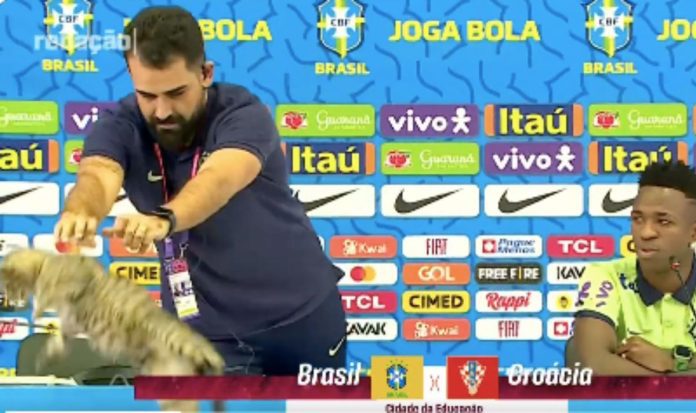 Brazil’s press officer ruthlessly picked up a cat and threw it off the table after the animal gate-crashed Vinicius Jr’s press conference on Wednesday in Qatar. The Real Madrid winger, who netted in the Selecao’s 4-1 last-16 demolition of South Korea, was on media duties to preview Brazil’s quarter-final showdown with Croatia on Friday.

But the press conference was somewhat interrupted by a bizarre moment when a stray cat appeared to harmlessly sit on the top table alongside Vinicius Jr.

Yet Brazil’s media officer was seemingly in a hurry to get rid of the animal, savagely picking it up by pinching its skin before dropping the animal onto the floor in front of the table.

Gasps can be heard from journalists in the room, who are seemingly in shock at the way the cat was brutally handled.

The media officer then makes a confused face in response to the reaction while even Vinicius Jr seems in shock at what he just witnessed.

Earlier this year, West Ham defender Kurt Zouma was ordered to carry out 180 hours of community service and banned from keeping cats for five years after he pleaded guilty to kicking and slapping a cat.

Zouma was also fined two weeks’ wages by West Ham, who decided not to suspend him from action despite his sickening antics.

Cats seem to be prominent in Doha after England also befriended a stray called ‘Dave’ at their team base in Al Wakrah.

Dave has been getting plenty of publicity on Kyle Walker’s social media channel after the feline posed alongside John Stones and Kalvin Phillips one morning.

“Dave is fine,” Walker said, when quizzed on his furry friend ahead of England’s World Cup quarter-final against France this weekend.

“He had a little scrap with another cat the other night. I think they are fighting over territory and the food. But he’s doing well.

“Hopefully I can stick to my promise that he will come home with us if we were to win the World Cup. Dave’s fine, thank you for asking.”

England take on France on Saturday for a place in the semi-finals.

Inside England’s post-Euro 2022 party plans as Lionesses to celebrate with...