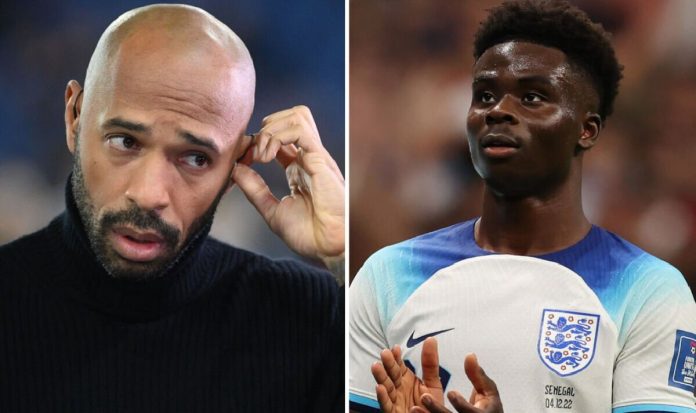 This World Cup is the first to be staged in a Muslim land. The stadiums have their own faith rooms and the call to prayer from the mosque nearby their Al-Wakrah base is regularly to be heard as England train. It is a bewitching sound as the sun sets but for Bukayo Saka, a committed Christian, a nightly Bible session is more his thing.

Amid the stress of the biggest tournament in football, that time alone with the good book is precious. “I’ve been continuing to read the Bible out here. I read it every night,” said Saka. “For me it is really important to have the presence of God in me all the time.

“It gives me more confidence that God’s plan is perfect so I can go on the pitch and know that God has my back. The main thing for me is keeping my faith, having faith in God, so I don’t have to be nervous or worry about any outcomes.

“It is my first World Cup, I can start worrying about different outcomes but I just choose to put my faith in God.” That faith must have been tested when Saka suffered the pain of missing the decisive penalty in the Euros final last summer – and being racially abused online for his trouble.

But with the help of his beliefs and the warm embrace of so many in football he pieced himself back together. Amongst them was former Arsenal legend Thierry Henry. “Thierry was in touch,” said the 21-year-old. “It meant everything for him to get my number and to reach out to me. It’s not just from that moment.

“After most Arsenal games, he reaches out to me. He’s still so passionate about the club and he’s an amazing person.” This weekend, of course, Henry will not have Saka’s back. It is France against England with all the historical connotations that involves.

Saka is aware of the scale of the upcoming game. It is, he accepts, not a normal match. But he is endeavouring to keep it within the boundaries of a sporting contest. “The rivalry in this World Cup is big. It is two nations that have performed exceptionally well in their first four games,” he said.

“We’ve watched their games, we’ve followed them and we’ve seen the quality that they have and I’m sure they’ve done the same with us. It’s definitely going to be an exciting game and everyone is looking forward to it.”

It is just possible that it could come down to penalties. If it does then Saka, with the crutch of his faith to support him, is steeled to step up again.

“I have progressed and matured as a player and a person since that moment,” he said. “I would not have stepped up the times I have stepped up for Arsenal with penalties if I was not confident so if the moment comes and if I am set to take it, I will be more than happy to.”

Philippe Coutinho transfer chase ‘down to two clubs’ with decision due...