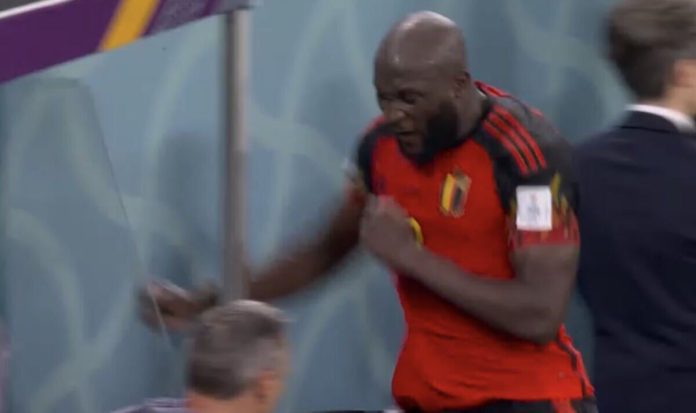 Belgium forward Romelu Lukaku destroyed the dugout with one punch after his disastrous display against Croatia on Thursday. Roberto Martinez’s ‘golden generation’ played out a frustrating 0-0 draw to send them crashing out of the Qatar World Cup, with Croatia and Morocco progressing from Group F instead.

Lukaku had played a limited role in Qatar leading up to the final group match with Croatia. The Inter Milan forward, who boasts a superb goals record at international level, suffered an injury while with Inter Milan that left him bench-bound against Canada and restricted to a late cameo in the defeat to Morocco.

Once again, Lukaku came off the bench against Croatia on Thursday as Belgium needed nothing less than a win to keep their knockout-stage hopes alive. They turned the screw in the second half and Lukaku was gifted a series of close-range opportunities, but the Vatreni eventually held on to claim a goalless draw.

After the final whistle, Lukaku had to be consoled by legendary French striker Thierry Henry and he vented his frustration with a powerful blow to the dugout, with a right-hand haymaker separating the screen from its bracket.

BBC pundit and former England striker Alan Shearer was among those to discuss Lukaku’s poor display after the final whistle on Thursday. “It will hurt him but as I said, he’s only played 31 minutes,” he explained. “He is clearly nowhere near ready otherwise they’d have brought him on earlier and they only brought him on in a desperate situation – which they were.

“He’s only played 31 minutes since August so clearly nowhere near fit and that showed. He can’t all be put down to him, they can only look and blame themselves.” Having finished third in Russia four years ago, Belgium came into Qatar among the favourites but De Bruyne was eventually proved right as he discussed the issues relating to their ageing contingent.

When asked whether his nation could win the World Cup, the midfield maestro responded ‘no chance‘, adding that four years ago was their big opportunity to go all the way. Belgium looked to be on course for another knockout run when Michy Batshuayi’s strike saw them edge past Canada last Wednesday.

However, they were outclassed and outworked by a hungry Morocco side at the weekend and Croatia’s Josko Gvardiol put in a heroic performance to keep the scores level in the Group F decider. Manager Martinez could soon be out of a job with his contract due to expire in the wake of the tournament.

Think you can predict the World Cup Golden Boot Winner? If so you could WIN £150 in Nike vouchers! CLICK HERE

Man Utd woes could be eased by star who wants to...