As many as 8,000 migrants, including families with young children, have entered Guatemala since Friday, authorities say, fleeing poverty and lawlessness in a region rocked by the coronavirus pandemic and back-to-back hurricanes in November.

Many of the migrants hope for a warmer reception from the incoming administration of Biden, who will be inaugurated Wednesday. So far, his team has indicated it will not make immediate changes to policies at the U.S.-Mexico border.

“There’s no food or water, and there are thousands of children, pregnant women, babies, and they don’t want to let us pass,” said a Honduran stuck at the blockade who gave his name only as Pedro.

Guatemalan authorities said late on Sunday they have sent 1,568 migrants back home since Friday, the vast majority to Honduras. Nearly 100 were returned to El Salvador. 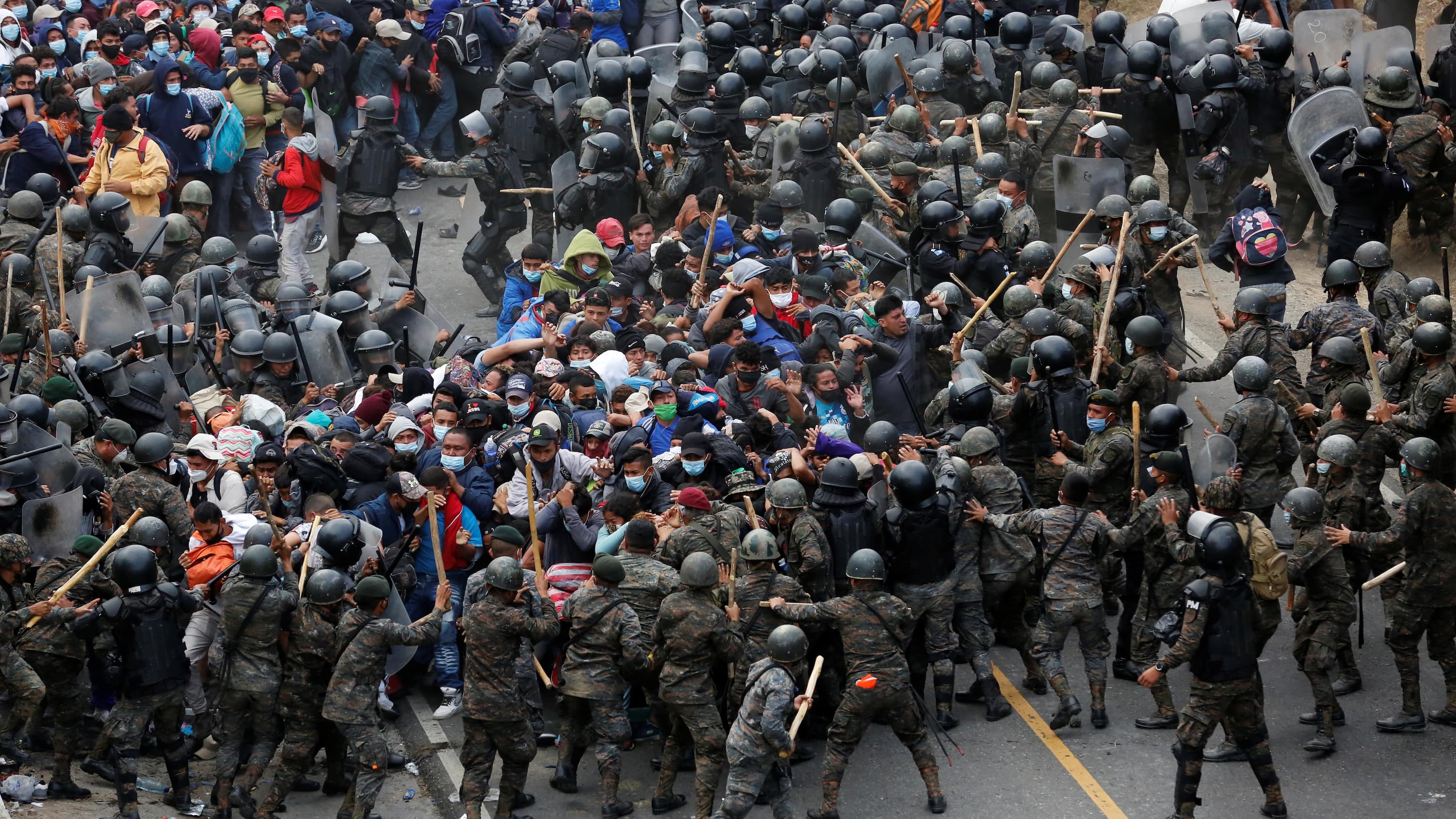 Almost 8,000 migrants, most of them Honduran, are meeting stiff resistance as they try to push into Guatemala on the way to the U.S. Mexico also says it will stop the caravan of people fleeing poverty, lawlessness and the coronavirus pandemic. 0:58

A Reuters witness said about 2,000 migrants were still camped out on the highway near the village of Vado Hondo, about 55 kilometres from the borders of Honduras and El Salvador, after clashing with Guatemalan security forces on Sunday.

“We’re starving,” said one Honduran mother, stuck behind the cordon with her 15-year-old son, her daughter, nine, and her four-year-old niece.

“All we have is water and a few cookies,” said the woman, who declined to give her name, but added that she and other travelers had formed a prayer circle as they camped out.

Other migrants evaded the gridlock by fleeing into the hills to continue onward to the border of Mexico, where the government has deployed police and National Guard troopers.

“We ran into the mountains because I’m travelling with my one-year-old,” said Diany Deras, another Honduran.

Mexico’s border with Guatemala was quiet.

“All is calm here,” said a National Guardsman in charge of a border crossing directly opposite Tecun Uman, Guatemala, where caravan leaders hope to cross into Mexico. He sought anonymity as he was not authorized to speak to media.

“I hope Guatemala contains them,” he added.

Leila Rodriguez, of Guatemala’s human rights office, spoke to the migrants, acknowledging: “This is a distressing moment we’re experiencing.”

“We want to start a dialogue with you, to ask you to accept some of the needs of the Guatemalan people right now,” Rodriguez said, in apparent reference to President Alejandro Giammattei’s refusal to allow caravans through out of fear they could spread COVID-19.

Some of the migrants wore face masks, others didn’t, but there was little social distancing among them. Few had the negative COVID-19 tests that Guatemala requires for people entering the country.

Guatemala’s Health Ministry reported that 21 of the migrants sought medical attention at health centres and tested positive for the coronavirus. The department said the 12 men and and nine women would not be returned to Honduras until they undergo quarantine at centres in Guatemala.

Queen Elizabeth says don’t be selfish, get a COVID shot

Kitchen Art Ideas – How to Pick Art for Your Kitchen

Families still suffering with separation, despite arrival of vaccines