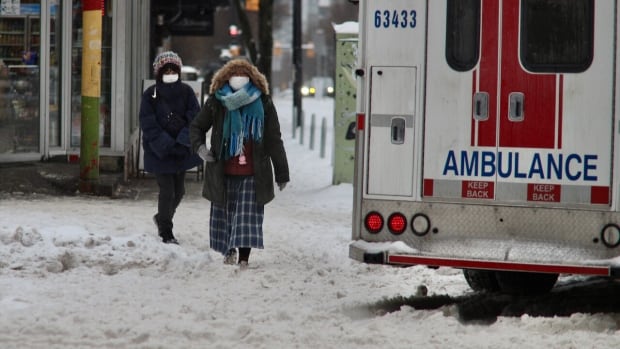 The health-care service in Chetwynd, about 1,100 km northeast of Vancouver, has been so intermittent that Ashley MacWilliam is afraid it will put people like her asthmatic daughter Aurora at risk.

The hospital in the community of about 2,500 had at least 13 short-term closures last year.

“Even a few weeks ago, she was having an asthma attack and we had to call ahead to make sure the hospital was open because the next closest one to us is about an hour drive away in good weather,” MacWilliam said.

To make matters worse, Northern Health, the authority responsible for Chetwynd Hospital and health care in the northern half of the province, has stopped posting public notices about closures, also known as diversions, the 29-year-old said. Instead they’ve been posting  to community Facebook groups — with multiple residents making posts on Facebook asking for more transparency.

Chetwynd is among dozens of communities that have seen hospital closures over the past year, and advocates are asking for rural residents to be subsidized for the costs associated with the health-care system they see as unstable.

For example, MacWilliam said the ambulance access in her community has been spotty recently, with wait times of up to 40 minutes — well above mandated “target time” of nine minutes.

“If it’s life threatening, there’s no guarantee there’s going to be anybody around to help you,” she said.

Hospital closures — especially without public notice — could lead to vulnerable residents, including seniors, dying or being seriously injured, she said, noting that health-care facilities in the region are spread out.

The inconsistency could be “very scary,” she said, adding that some relatives once had to stay overnight in Dawson Creek because Chetwynd’s hospital was closed.

Northern Health said in a statement that it was in a difficult position.

“When the cause of a service interruption is sudden or unexpected, or it occurs after hours, it is challenging to provide public notifications in real time – including notifications that regular services have resumed,” a spokesperson for Northern Health said in a statement.

“Northern Health makes every effort to prevent service interruptions, and works to limit their duration … and the impact on patient care when they do unfortunately occur.”

Jude Kornelsen, co-director of the Centre for Rural Health Research at the University of British Columbia, said costs could add up for rural B.C. residents if their primary care provider has to go on diversion and they have to travel.

A peer-reviewed study called “The rural tax” that Kornelsen led in 2021 found that rural residents pay an average of $2,044 in out-of-pocket expenses trying to access health care — including costs for meals, accommodation and specialist services.

The study, based on a survey of more than 300 respondents, found they spend an average of $856 on travel and $674 on accommodation.

“Almost 60 per cent of people who responded said … the out-of-pocket costs, or having to travel, negatively affected their health,” Kornelsen said in an interview.

“The people who are in a lower socio-economic status often have more need for health services,” she added. “These are the people that travelling to access health care, unsubsidized, affects the most.”

“I would say rural residents across B.C. believe that they’ve been in a health-care crisis for a couple of decades,” he said.

And the consequences of the lack of health-care investment have been getting worse, he said.

Adams is among a number of residents, including mayors, calling for a move away from centralized health-care authorities, and more autonomy for communities.

Centralization “has practically removed any involvement in the residents’ voice within their communities,” he said. “There is a real need to bring the rural voice … back into the management of their own health.”

These challenges are intertwined with those faced by Indigenous people in remote areas, Kornelsen said, adding the government should fully cover the transportation costs to and from hospitals.

She said the province should also look to shore up primary care, create outreach clinics like those in rural Australia to allow access to specialists and increase access to virtual health.

A spokesperson for the Health Ministry said the provincial medical services plan provides some public transport discounts for people who apply in advance. Northern Health and Interior Health have their own programs with discounted fares.

In addition, the spokesperson said B.C.’s Practice Ready Assessment program, a pathway for internationally educated family doctors to be licensed to work in B.C., will triple in size from 32 to 96 by March 2024.

“Half of all graduates from the program are placed in rural communities through Return of Service agreements; the other half are placed in Primary Care Networks with critical staffing needs.”

The province is also beefing up incentives for support staff and physicians to settle in smaller communities throughout this year, the spokesperson said.

Statins: Three supplements to avoid mixing with the drug – expert’s...