A bar with vivid colours and Aztec motifs designed by Edinburgh practice Ja!Coco!

Chilean chef Juan Jose Castillo Castro has two SUPERICO venues in Edinburgh, both with interiors by Ja!Coco!, a locally based studio. The newest of these, SUPERICO 99, is located in a former 19th century bank, but its sunset-hued interiors transport diners quickly away from Edinburgh’s 99 Hanover Street to Latin America.

Led by Jaco Justice, Ja!Coco! describes itself as a ‘Maximal Design Studio’, and looks to offer a counter to Edinburgh’s ‘over-reliance’ on its heritage, bringing the studio’s colourful ‘3D, surface-driven environments’ to hospitality venues across the city. 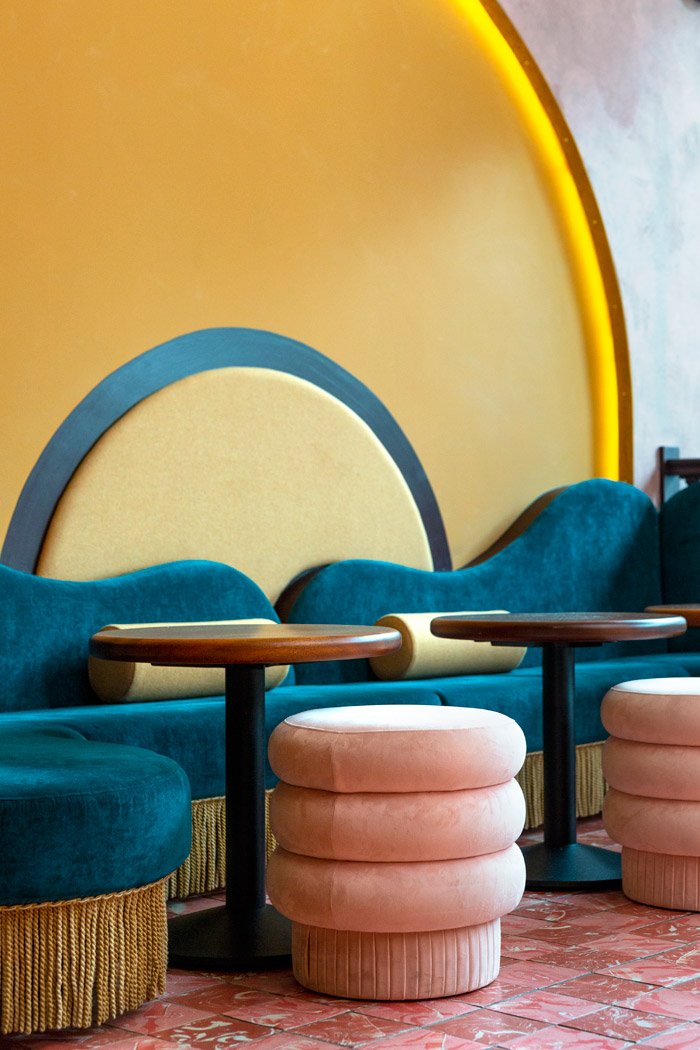 That’s not to say the building’s period features can’t be worked with, in this case, Justice incorporating the original arched details into the curvilinear abundance of the new interior scheme. Its shapes are taken from various Latin American symbols, as Justice explains: ‘Having travelled extensively through South America, I wanted to include Mapuche symbols, Aztec shapes and even huge geoglyph wonders such as the Nazca Lines in Peru. But not as a naff, appropriated theme park.’

Their undulating lines snake their way across furniture – on the bar shelving and overbar glass rack, or in wooden tables divided by a wiggle. Designed by Ja!Coco!, these tables have now been developed into a standalone coffee table design called ForFuckSnakes, forming part of the studio’s new ‘Throbjects’ range, launching in April 2021. 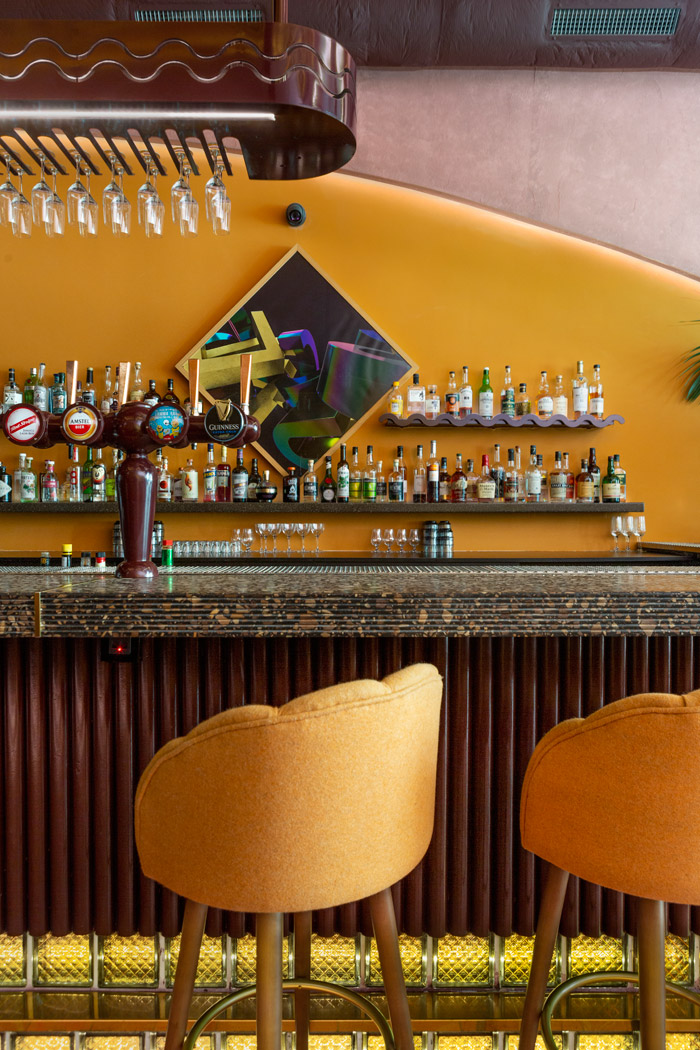 The timber terrazzo bar in Charcoal Mono, by Foresso

Repeated circular elements can be found in seating pouffes, designed by Spanish creative agency Masquespacio, and the centrepiece, a giant ‘Supermoon’ by Davide Groppi – an enormous sphere of delicate Japanese paper wrapped on to a hard polycarbonate base – big enough to require the removal of the front window for its installation. This 2m diameter lamp is a large homage to the solarworshipping rituals and beliefs of ancient South American culture, whereas the rich earthy palette – that of South America rather than Edinburgh – relates to the Inca goddess, Pachamama, translated as ‘World Mother’ or ‘Mother Earth’. 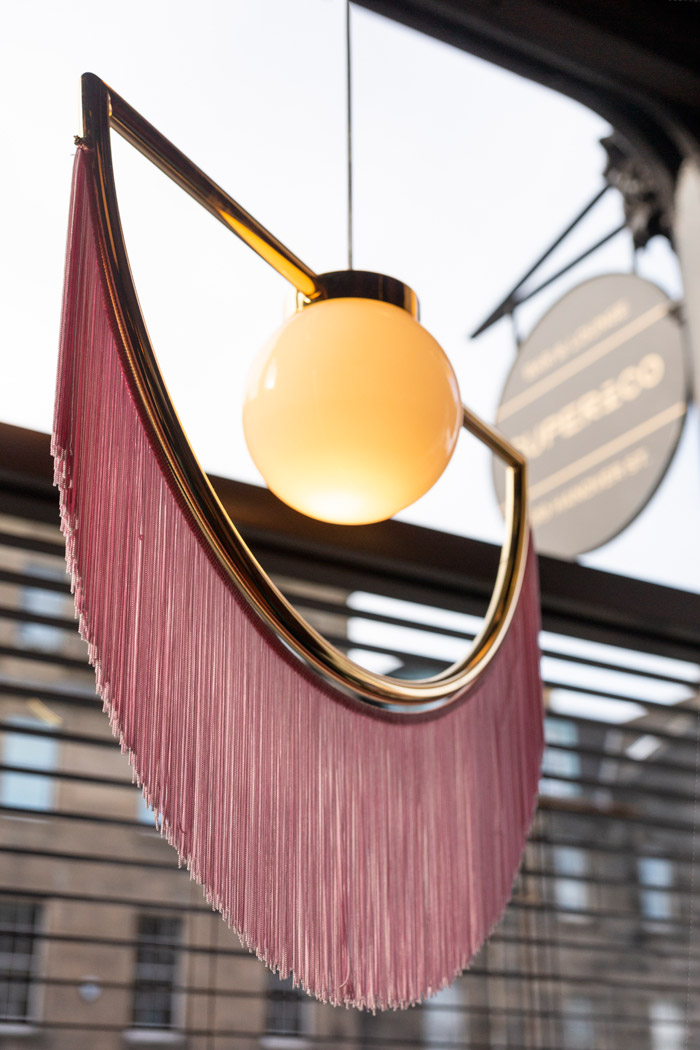 Wink lights by Masquespacio, and the table-embedded wiggle lines that Jaco Justice took from his South American travels

There are yellows, browns and a vibrant teal shade. Custom French Wash is applied to pastel pink walls, and banquettes and bar stools are upholstered in an ‘off-ochre’ Kvadrat fabric. Details and surfaces add to the mix, with long fringes adorning the bottom of plush seating, and the Wink lights by Masquespacio. 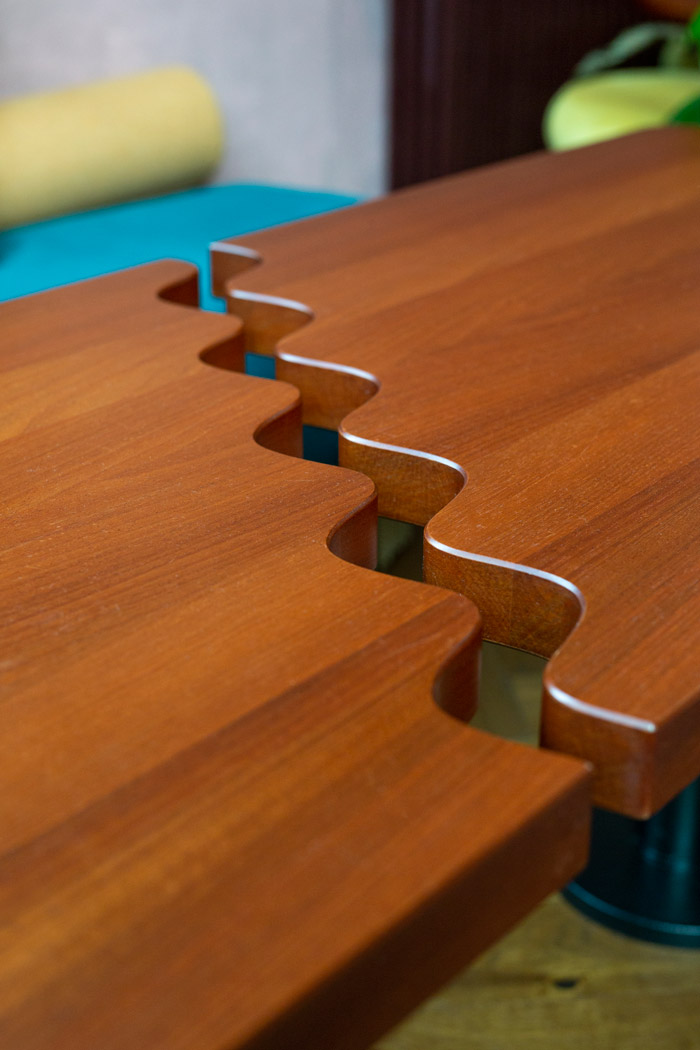 Wink lights by Masquespacio, and the table-embedded wiggle lines that Jaco Justice took from his South American travels

The tiled floor is a chequerboard of two custom colours of marbled encaustic tiles, made by multidisciplinary collective Assemble’s Granby Workshop. The timber terrazzo bar top by Foresso is worth a closer look too – featured here in the Charcoal Mono colourway, the design is made of British Walnut offcuts with black binder.

And once the sun goes down, illuminated elements come to the fore, such as the yellow glass bricks lining the bottom of the bar and the raised seating area, the curved wall panels and the Supermoon. 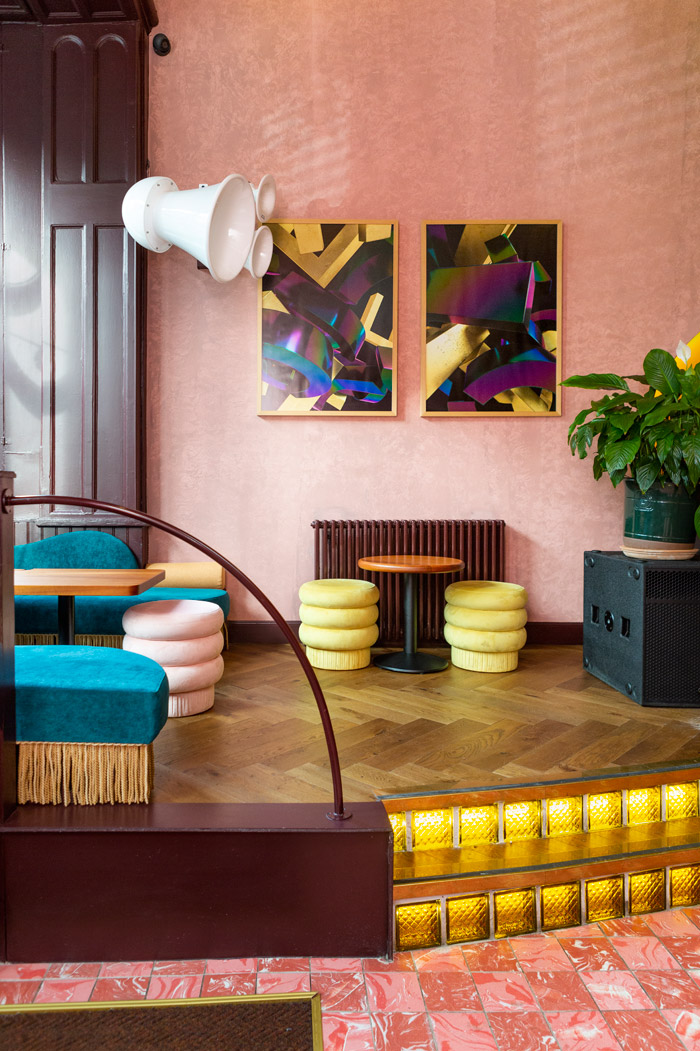 Backlit yellow glass bricks lead to the dais, another corner of the bar

The artist Melita from Lee Lee La Luna created collages for the first SUPERICO venue, but passed away before being commissioned for SUPERICO 99. Instead, type-based printed and projected digital artworks by the project’s brand designers Human Resources, and its lead designer Kurt Green, are found throughout. They provide some of the contemporary edge that defines these interiors, which complement its more ancient references.

The combined elements in Ja!Coco!’s design make for a vibrant space, even before mentioning the SUPERICO sound system and custom-built DJ booth that will allow the venue to host live events – hopefully permissible again before too long.

Hyperoptic solved a headache when switching to a new broadband firm

Biden and Harris offer solace to Asian Americans in wake of...