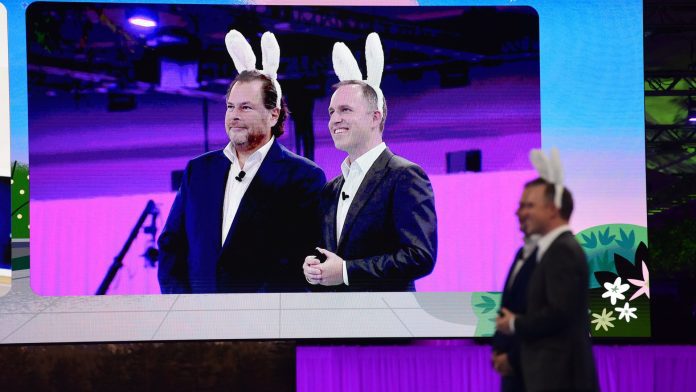 Salesforce shares were down about 10% by midday Thursday as analysts and investors digested Wednesday evening’s earnings report and the surprise news that co-CEO Bret Taylor will depart by the end of January 2023.

Taylor’s departure will leave founder Marc Benioff as the sole CEO at the tech giant.

Salesforce beat analyst estimates for third-quarter profit and revenue but said it expected between $7.9 billion to $8.03 billion in revenue in the company’s fourth fiscal quarter, lower at the midpoint than analyst expectations of $8.02 billion in sales.

The company said it would take a $900 million hit in sales because of foreign currency effects. And operating cash flow fell 23% year-over-year to $313 million for the quarter.

Is “something more than macro pressuring Salesforce’s growth?” Morgan Stanley analysts questioned in a note to investors. The firm lowered its Salesforce price target from $273 to $250.

“We have to let him be free, let him go, and I understand, but I don’t like it,” the billionaire said on an earnings call. Taylor was appointed co-CEO and vice chair in November 2021, having previously served as president and chief operating officer.

Taylor was also chair of the board of Twitter before billionaire Elon Musk took the company private. Taylor joined Salesforce in 2016 when his startup, Quip, was acquired by Benioff’s company.

Shares of Salesforce are down about 43% year-to-date.

What to know before you shop

Disney is raising prices, but this time, don’t blame inflation