But I can’t stop playing Rollerdrome.

Instead of writing, I once again queue the Barbican Arena competition, the last leg in my six-level demo. The level begins in a long, claustrophobic tunnel lit in red light. I have everything I need – rollerskates and a shotgun – to put on the show of a lifetime. Ahead of me are echoes of a crowd clapping in unison, an ominous metronome inviting me further past the steel-latched mouth of the arena. They paid for a show, and I’m going to give it to them.

Rollerdrome is a bloodsport funded by a mega-corporation in a near-future dystopia. Challengers travel the globe, competing in industrial arenas to climb the ranks of a televised competition – all to distract the public from a grim reality. Each match-up shares a simple-but-effective formula: drop into an arena, kill corporate-owned militia units, and skate for your life. It’s like Tony Hawk’s Pro Skater but with guns. It’s great.

Everything in the arena wants to kill you. Snipers, rocket-wielding commanders, riot guards, and even mechs are all constantly targeting you. One of the game’s challenges is to know when to strike or evade, a hard lesson I learned after a few deaths. If you run out of ammunition, you must perform skate tricks to generate more. Low on health? Kill enemies to regenerate or quickly escape by grinding a nearby rail. If a sniper nest is out of reach, gain some air on a nearby half pipe to close the distance. 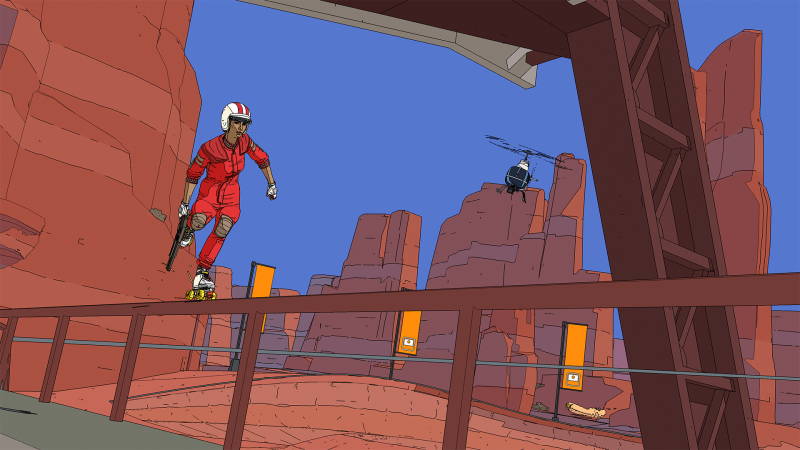 Rollerdrome is fast-paced and full of spectacle, but it’s never unmanageable, thanks to the game’s bullet-time feature. Upon entering bullet time, which you can trigger almost any time, everything slows down, giving time to line up cinematic kill shots easily. Certain weapons have unique secondary mechanics that activate while in slow motion. The shotgun, in particular, has a fatal slug shot requiring an additional timed button press similar to an active reload, and it’s delightful to wield. Bullet time makes it easy to switch between slow motion and real-time while stringing together combos, creating a hypnotic flow state I never want to end.

“Kara Hassan: Match Victory,” a faceless commentator announces after I extinguish the last of my opponents in the arena.

It’s too early to share a final judgment – I’ve only played a small demo of a larger project – but Rollerdrome could be in the running for the best-feeling game of the year. We’ll have to wait to find out when it releases on August 16.

NBA 2K23 Preview – Everything You Need To Know About NBA 2K23

Another Star Wars: Republic Commando Action Figure Is On The Way