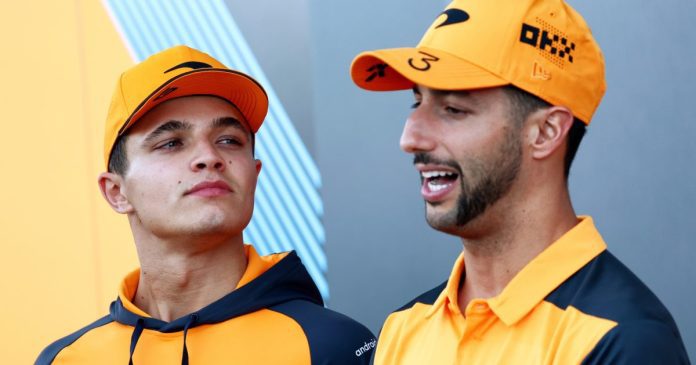 Daniel Ricciardo believes former McLaren teammate Lando Norris has the “ability” but needs to be tested by a race-winning Formula 1 car.

During their two-year spell at McLaren, Norris out-performed Ricciardo and finished ahead in the Drivers’ Championship in both seasons, although the latter claimed victory in the 2021 Italian Grand Prix.

Following the Australian’s inability to turn his form around, McLaren opted to let him go and draft in Oscar Piastri from Alpine.

Norris finished the 2022 season as the only driver outside of the big three teams to claim a podium – with third at Imola – and was a comfortable seventh in the Drivers’ Championship.

Ricciardo considers Norris to be among the best in F1 from a “driving ability” perspective, but feels there is still one test the Briton needs in order to be considered on par with likes of World Champions Max Verstappen or Lewis Hamilton.

“It’s tough to make a direct comparison until he’s in a top team and regularly running up front,” Ricciardo explained of how Norris stacks up against Verstappen on the F1 Beyond The Grid podcast.

“I’m obviously not trying to discredit him, but [it’s tough to make comparisons] until you really win and see how you handle that [pressure].

“It’s where I go back to Lewis and it’s like: ‘Yeah, he was winning and the car is great’, but he still did it and handled the pressure.

“He still performed and did what everyone thought he could, so that is where it is hard to make a comparison.

“But from driving ability, the kid is very good – I don’t know if I could say he is like Max as that is a little hard, but for now, the kid is good.”

Ricciardo has previously stated that he felt one reason Norris was able to adapt to the tricky 2022 machine was the fact that “ignorance is bliss”, with Norris having been with McLaren through his rise up the junior ranks.

And while he feels that the Woking squad is Norris’s team, he states that this was not a reason for his own troubled spell.

“That’s not to say they just put everything onto him and not me, but he’s grown up in that team,” said Ricciardo.

“It’s familiar to him now and he’s obviously proved his pace and speed.

“Everyone at McLaren is excited for what Lando can do.”

F1 silly season: How long are F1 drivers contracted to their...