Architect Phillip Tefft, who heads the London office for exhibition design company RAA, has spent a quarter of a century working on high profile exhibitions and visitor destination projects

BACK IN 1996, PHILLIP TEFFT was given a year by New York-based exhibition design company Ralph Appelbaum Associates to make a go of a new London office by finding a way to get ‘to the heart of British culture’. A quarter of a century on, after the completion of 52 built projects – and 124 commissions in total – it seems fair to say that it is now certainly a case of ‘mission accomplished’.

Tefft, however, would be far too modest to say so, despite having built up a stellar list of museum and visitor destination clients including the Imperial War Museum, St Paul’s Cathedral, the Tower of London Jewel House and many more national institutions over the years. 2022 promises something of a purple patch for the 25-strong studio, as it will work on major exhibitions. This includes the newly opened The World of Stonehenge at the British Museum and The Intelligence Factory exhibition at Bletchley Park, as well as a clutch of plum UK museum and visitor attraction projects including a Chimney Lift experience at Battersea Power Station. It is also working on the redesign of the Harris museum and gallery in Preston, which is due to reopen in 2024. 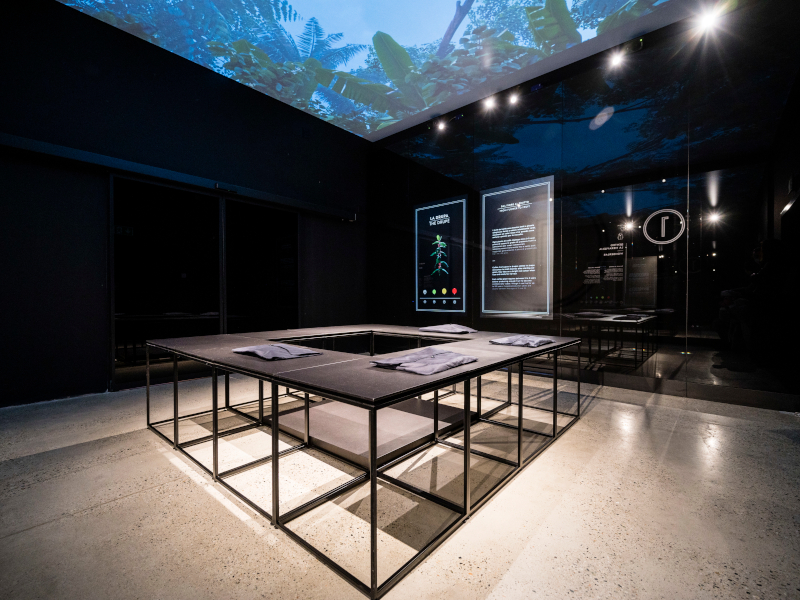 Image Credit:RAA / ANDREW LEE. The Lavazza visitor experience hall at the company’s Settimo Torinese factory, where the 1895 brand is produced

Tefft jumped at the chance to set up the office in London, which coincided with a time when RAA was pursuing more commissions on an international basis.

‘We slowly built the practice up, project by project,’ he recalls, with important early repeat clients including the Royal Academy of Music and the Horniman Museum in London. 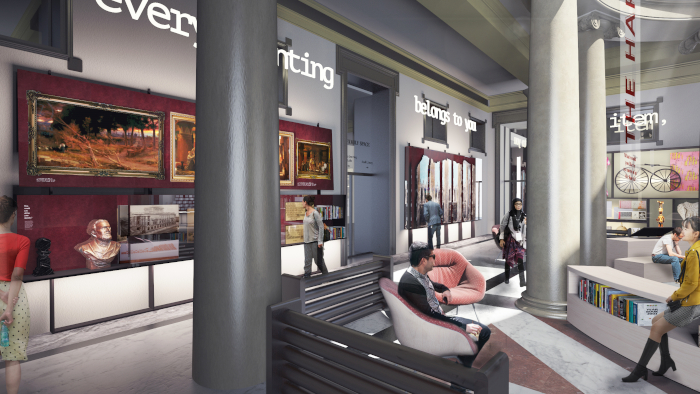 In a way, the timing was fortuitous, with a wave of lottery-funded projects around the turn of the millennium providing opportunities for designers in the cultural field. Work for the Transport Museum in Covent Garden and the Royal Albert Museum in Exeter followed along with several plum jobs ahead of London 2012, for which RAA designed visitor interpretation in the Olympic Park, and the ‘Oculus: An Eye Into St. Paul’s Cathedral’ exhibition in the crypt of the cathedral in 2010, which used advanced projection technology to offer an immersive visitor experience of the cathedral’s history.

The World of Stonehenge, which opened at the British Museum in February, is an atmospheric experience that makes stirring use of lighting and soundscapes to take visitors back to the time of the stones. The evocative show follows on from the RAA-designed Troy exhibition of 2019.

‘I’m a dreamer. I like projects that take you to another place,’ says Tefft.

He says the practice particularly enjoys social history subjects with contentious aspects, and using its interpretative and design skills to understand human behaviour and how that shapes world events. A case in point is the Second World War galleries, completed by RAA last year at the Imperial War Museum, which used the stories of individual participants to engage with the visitor and tell a truly global story.

‘We’re not afraid of difficult subject matter. We like that there’s no simple answer to why people do what they do,’ says Tefft, adding that the practice enjoys projects that encourage counterpoint interpretations rather than more authoritarian museological approaches.

This is made easier, he says, by technological innovations, which allows the presentation of multiple views that are easily navigable by the visitor, and which allows visitors to have their own voice. Museums should, he says, be places of dialogue and of changing perceptions. 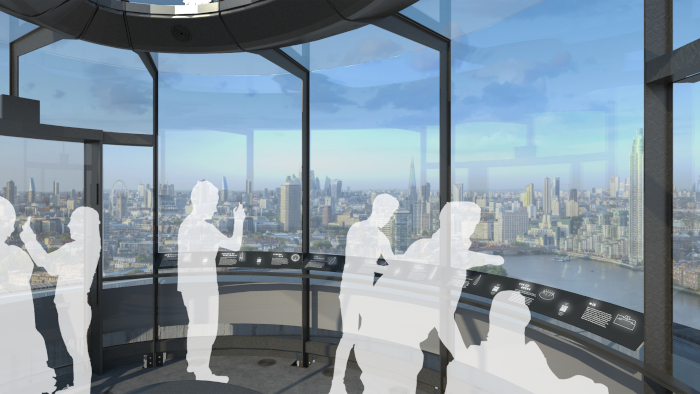 The London office currently has 17 ongoing projects, with 80% of RAA’s work being museums, with the rest branding and visitor experience. Tefft feels that working across these two sectors is mutually beneficial for both RAA and its clients.

‘We learn from both experiences and maybe our clients benefit from both sectors,’ Tefft explains. ‘It helps us focus our museum clients on clearly communicating their brand identities, and that’s helpful.’

In both cases, it can be about forming an emotional connection with the visitor, something that he says is at the core of RAA’s approach when designing. ‘Ralph [Appelbaum] has always said, and I’ve always agreed with him, that the best way to help people learn is to touch them emotionally,’ he says.

In RAA’s work with Lavazza, the Italian coffee brand, the strands of exhibition and branding work have come together. RAA drew on the family origins, heritage and values of the brand in its design of a visitor attraction at Lavazza’s headquarters in Turin, Italy. This was followed by a further visitor experience at the Settimo Torinese factory, where Lavazza produces its 1895 brand. And, last year, RAA opened a flagship presence in London, which combines a shop, café, tasting experience and restaurant. The central bar/servery is inspired by the shape of a coffee bean and made using compressed coffee grounds, while above it a chandelier of golden beans creates a central focal point, and graphics inspired by the Lavazza heritage adorn the walls. The company is working on further flagships in major European cities and other global opportunities.

In county Cork, Ireland, RAA is redesigning the distillery visitor experience for Midleton Distillery, home to whisky brands such as Jameson. But perhaps the most spectacular of its current project is at Battersea Power Station in south-west London, where the company is working on a Chimney Lift visitor attraction in one of the building’s famous chimneys. Due to open this summer, the project includes interactive displays telling the story of the building’s role generating power for London as well as offering a sound and light experience in the circular lift journey up to the viewing platform.

Looking ahead, Tefft is excited about how designers can help museums develop exhibition content that offers greater equity, inclusion and diversity. In particular, he is galvanised by what he sees as a ‘reawakening’ in the cultural sector in relation to collections and the communities they reflect. This means more use of co-creation and working with communities, which he says is already changing the way RAA works.

This is being explored in a couple of current projects. In Australia, RAA is working on Shaped by the Sea exhibition at the Australia National Maritime Museum, which will focus on Australian indigenous people’s relationship to the sea in pre-colonial times. This includes a generative media piece that is reactive to human presence.

In Nigeria, RAA is working on the John Randle Centre for Yoruba History & Culture, where displays will include iconic objects on long-term loan from the British Museum. 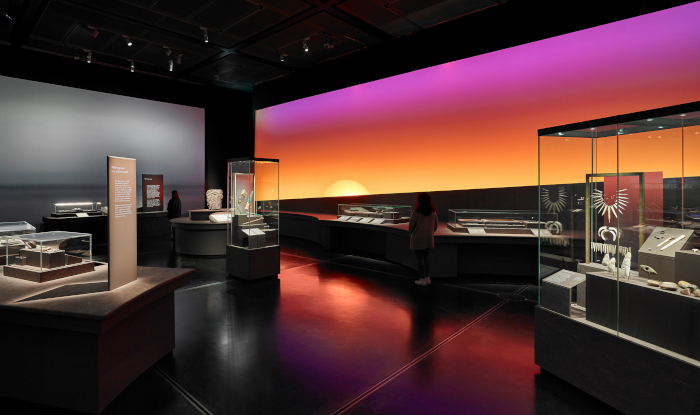 The World of Stonehenge exhibition at the British Museum running from 17 February until 17 July. Image Credit: RAA / ANDREW LEE

Another challenge is designing sustainably. He is enthusiastic about the potential of technology, in particular sound and light, to create non-touch immersive atmospheres and experiences. Proposals include a whale museum in Norway where visitors could virtually experience the sensation of whales swimming past them, and reacting to their presence. With the touchscreen era now over, developments in this area are ‘catching fire’ he says.

There is clearly plenty more to come from RAA’s London office, not only in the UK but elsewhere in Europe and beyond. Having worked on the 2012 Olympic Park interpretation, RAA is now in discussions about potential cultural destination projects in Milan to coincide with the 2026 Winter Olympics.

‘We’re getting there,’ says Tefft, who is enjoying these new challenges a quarter of a century on from setting up in London. ‘Who knows what’s next?’

Alonso predicts punishment for Leclerc and eyes promotion to podium

Horner reveals AlphaTauri part was to blame for Verstappen problems