FX speaks to Clare Wright, co-founder of the architectural practice Wright & Wright about working with archives and special collections and the practice’s latest projects

Clare Wright co-founded Wright & Wright in 1994 alongside partner and husband Sandy. Twenty-six years later, the practice has many notable projects under its belt, including The Women’s Library, the Architectural Association Masterplan, and buildings for several Oxford colleges, while those recently or soon to finish are Lambeth Palace Library, the Museum of the Home and an upcoming project for the Lobkowicz Collection in Prague.

A common thread quickly reveals itself within the practice’s portfolio, with a considerable proportion of it concerning special collections and archives. Yet while Wright does excel in this area, there are other strands to her architectural bow. Before Wright & Wright she worked at Rock Townsend and also Howell Killick Partridge & Amis, and she has designed for the elderly and those with special needs and educational needs, as well as developing Lifetime Homes for the Joseph Rowntree Foundation. While working with local authorities she developed policies for energy, access and security, and in 2005 she was awarded an MBE for services to architecture. 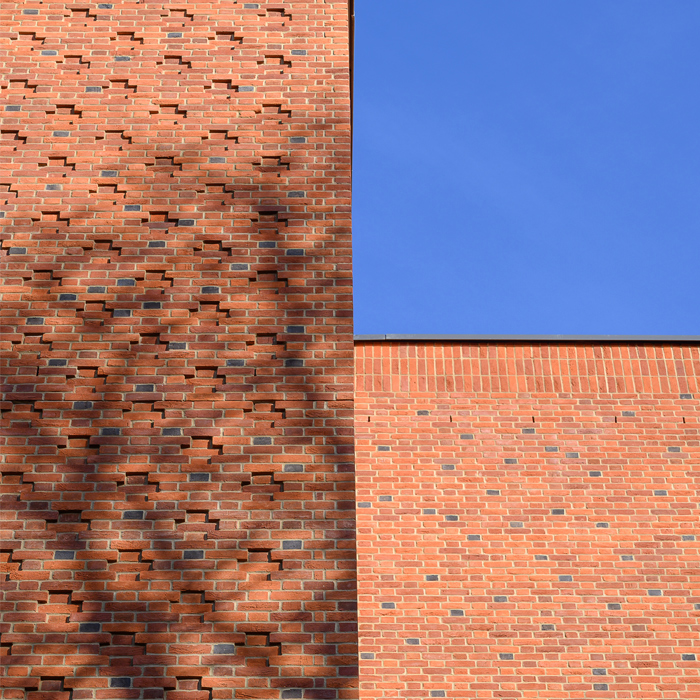 To return to that theme of special collections, in a book she published on the subject (coauthored with critic Catherine Slessor) she writes: ‘All special collections are unique, and each, in some ways, transcends time. Their riches and legacies survive us, passing on to successive generations, and the buildings that house them are more than just architecture; they are a stake in the future.’ This is an idea that could be applied to Wright’s and the practice’s work in general. The buildings are not headline-grabbing, but are ‘heavyweight’; Wright explains that they are ‘interested in masonry and building in stone and brick’. Each Wright & Wright building has another kind of solidity to it – seeming to have a past, present and future in its surroundings, aiming to be ‘as if brushed from the sand and it was just there’, says Wright, referring to an idea from her tutor and early mentor Isi Metzstein that she has carried with her. 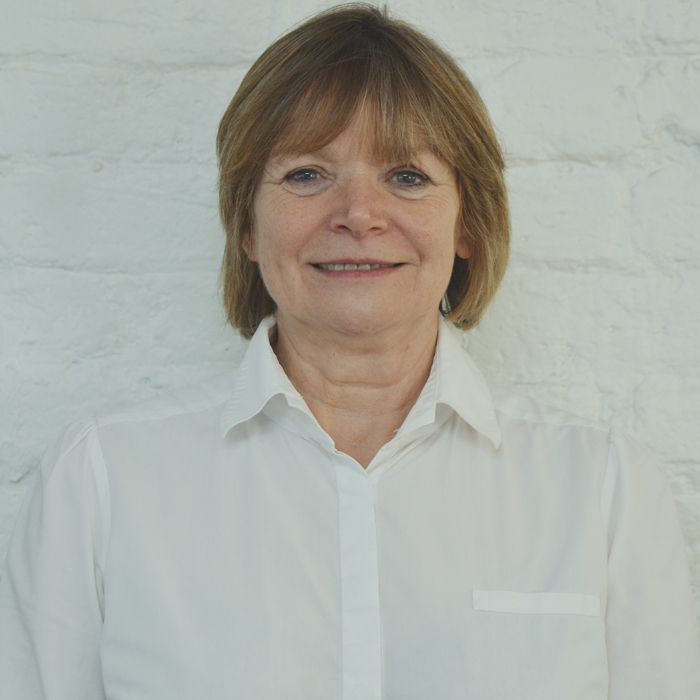 A building’s legacy includes its environmental impact too, and this factor has long been high on Wright & Wright’s agenda. Working on London’s The Women’s Library in 1995, the practice’s second-ever project, Wright & Wright created a pioneering passively controlled archive – the first city-based one to be built in the UK. In subsequent projects, Wright & Wright has continued to develop sustainable building methods, right down to a recent zero-carbon group of buildings for St John’s College, Oxford.

These elements set Wright & Wright on a different path to some of its peers. When they were starting out, Wright says ‘everybody was getting into design and build, and there was a kind of attitude of just building anything, and we didn’t really want to do that’. Then, Wright recounts: ‘Somebody said, you know if you build in the historic environment, people have to be careful.’ 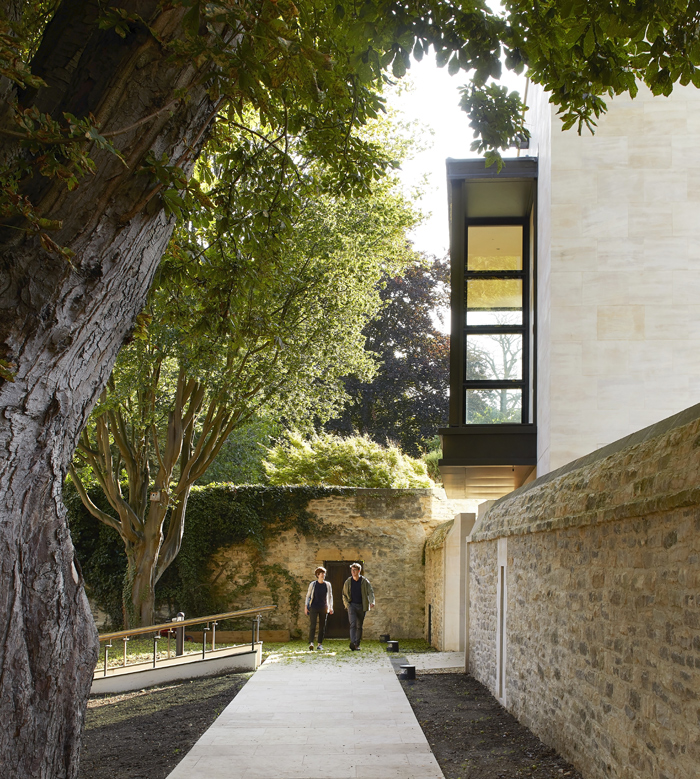 Wright describes the approach they take working in historic environments as ‘sleuthing’. While this momentarily conjures up a Poirot-esque image, what it means is an interest in understanding the connectedness of things, with an attention to detail, context and backstory. The sleuth knows to look in unexpected areas – on Wright & Wright’s recent St John’s College project, it was unearthing a hidden passage that had been sealed for centuries that led to the architectural solution.

This approach also means that one Wright & Wright building might behave quite differently to another. Some have a larger presence: the building at Lambeth Palace in London, for example, where ‘you just can’t help thinking that every monarch or head of state has passed through that archway’, proudly stands nine storeys tall, figuring in the south London skyline. For a project such as St John’s on the other hand, the new building is ‘hardly apparent from key vistas, while internally it revitalises the existing historic libraries’. At the new Museum of the Home (previously the Geffrye Museum), also in London, internal structural interventions have transformed and opened up a great deal of new space, yet from the roadside the most visible changes are small, low-key pavilions at the edge of the site. 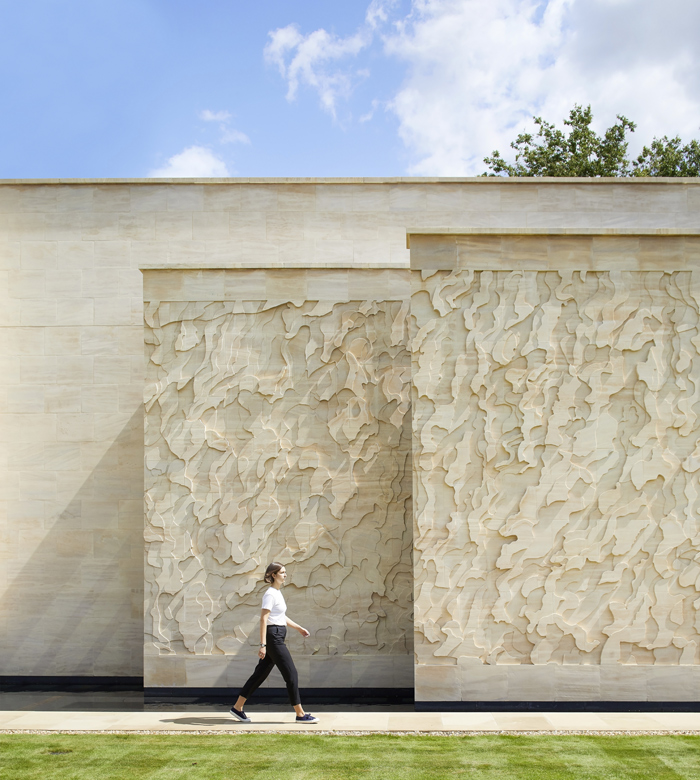 Just as context shapes a new building, careers are shaped by it too. For Wright, having kids and going through a period of recession led to gaining experience outside of ‘mainstream’ architecture, including a period of teaching at the Bartlett and North East London Polytechnic (now the University of East London) as well as taking on the role of design manager at Circle 33 Housing Trust.

Ending up at Circle 33 hadn’t been in the plan, but with young children it was difficult to find a job, Wright explains. ‘I thought I wasn’t going to be an architect any more!’ she continues, but fortunately the role far exceeded her expectations. Not only was she still an architect, but, as she reflects: ‘I was able to see it from a very different perspective as well. And I was able to have a team, and introduce CAD, and also understand how things worked with clients.’

While working outside the ‘mainstream’ Wright has worked on a number of projects with real importance, including the Aids & Housing Trust, which involved designing housing for those living with HIV. ‘At that time, being HIV positive was really dangerous, and so the whole thing had to be incredibly confidential. People were so scared then that even people’s relatives might turn on them, or friends of theirs, so you had to design housing in which it wasn’t apparent that there were special provisions,’ Wright explains.

These projects were not only worthy (and award-winning, with the housing trust picking up four RIBA awards during Wright’s time there), but were greatly beneficial to Wright’s development as an architect: ‘What you actually find is that when you think about people who are in a particular situation … things become magnified when you look at it for a certain group, and then you can take what you learn from that and take it into your other work. So it’s very interesting, and very rewarding.’ 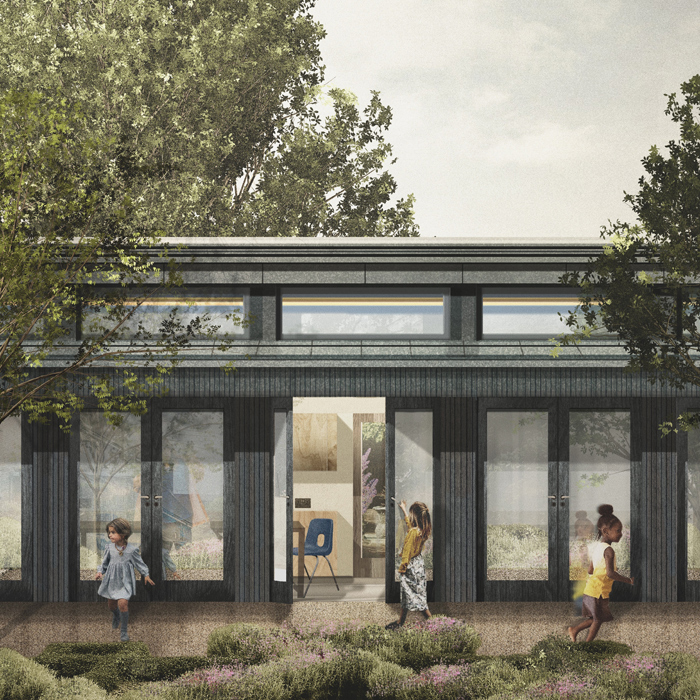 After these formative experiences, Clare and Sandy assumed they would work on social housing once they set up Wright & Wright, but it didn’t turn out that way. There hadn’t exactly been a plan, although when drafting a business plan with a businessman in a ‘marble-lined office in the city’ Wright bluffed one into being. ‘This chap had a laptop … we’re talking about 1994, so there weren’t many around, and I was very impressed,’ Wright says, describing the situation. ‘Anyway, he opened his laptop and he said, “OK, when are you going to get your first major project?” and I said “May”, and he said “OK, and what’s the budget going to be?” and I said, “One million pounds”, and he put it in his spreadsheet … and he said, “When will you get your next project?” and I said, “September”. And “What will that be worth?” and I said, “Well, five million pounds.”’

And that was exactly what happened next. The first was the Royal College of Art library, won via competition just a few months after the practice was first formed, and then The Women’s Library, won by another competition shortly afterwards.There might not have been a plan, but Wright has built an impressive body of work nevertheless.

At the end of our Zoom conversation, when discussing the objects surrounding Wright as I talk to her, she brings a paperweight close to the screen for me to have a closer look at. Such paperweights are designed for each project by artist Anna Gordon – first commissioned for an artwork by Wright & Wright for The Women’s Library all those years ago – and given to everyone who worked on the team for that project. The paperweights, featuring a detail carefully chosen from each project, are a nice illustration of the practice’s way of working and Wright’s own sensibility, with their solidity, care and attention to detail, and through looking back to the past, appreciating the present and building something for the future.

How to get rid of visceral fat: Having a diet rich in pulses could help burn belly fat

Where exactly Bridgerton is filmed and why you recognise some of...

At least 30 dead, several million still without power in U.S....

NatWest and RBS current account customers can earn 3% interest via...