Prince Harry and Prince William have thrown their support behind the England World Cup team ahead of their semi-finals match tonight.

The Duke of Sussex, 33, confidently declared that football is ‘most definitely’ coming home during an appearance in Dublin this morning.

Meanwhile his brother the Duke of Cambridge, 36, president of the Football Association, issued a statement saying: ‘The whole country is right behind you tonight. Come on England – it’s coming home!’

The princes are among the millions of England football fans anxiously waiting to see how captain Harry Kane and the team perform against Croatia in Russia tonight. If they win, England will secure a place in the World Cup finals on Sunday.

Prince Harry will shortly leave Ireland to ensure he’s back at Kensington Palace in time for kick off at 7pm tonight. 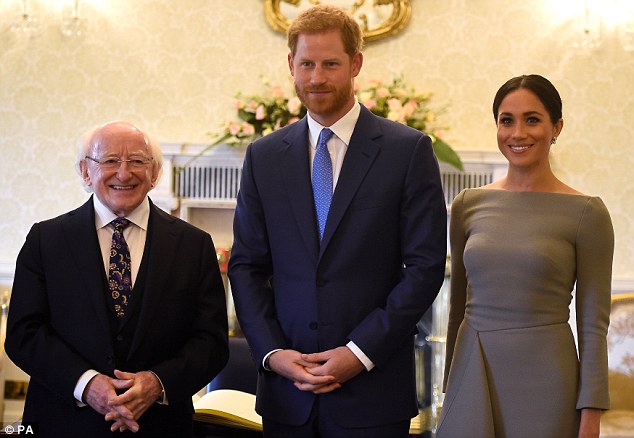 Prince Harry has thrown his support behind the England World Cup team ahead of their semi-finals match tonight. Pictured, Harry and Meghan with Irish President Michael Higgins today

The Duke of Sussex was more reserved about his views on the World Cup last night, telling Irish rugby legend Brian O’Driscoll, right, that he did not want to ‘jinx’ the outcome

Harry is currently on a two-day tour of Ireland with his wife the Duchess of Sussex, 36, their first official tour as a married couple.

He was asked about the national team’s chances as he met with Irish President Michael Higgins and his wife, Sabina, on the first stop of their whirlwind tour of the capital this morning.

The Duke of Sussex was more reserved about his views on the World Cup last night, saying he did not want to ‘jinx’ the outcome.

If England beat Croatia tonight they will secure a place in Sunday’s finals. 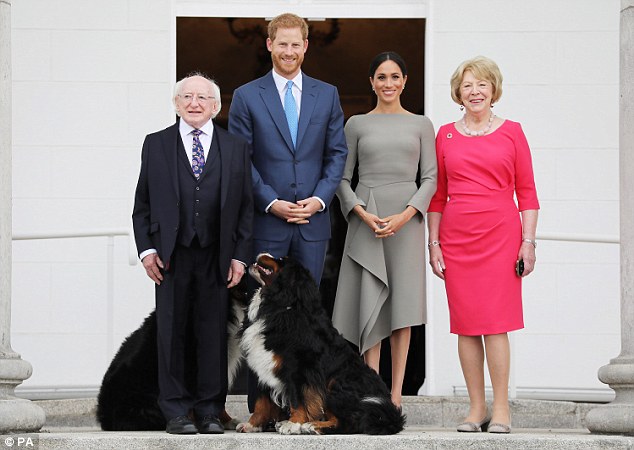 Prince Harry, 33, confidently declared that football is ‘most definitely’ coming home during an appearance in Dublin this morning 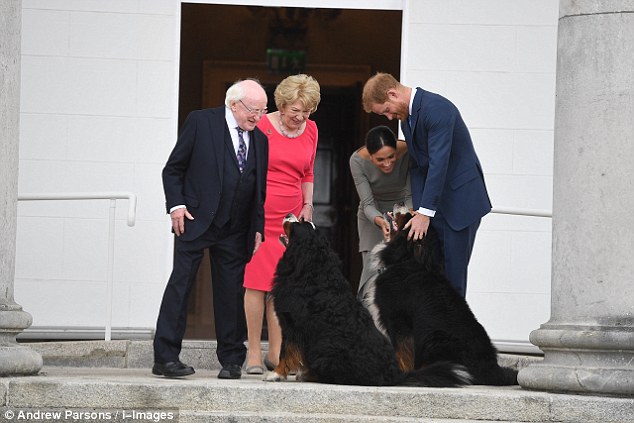 Harry refused to be pushed on the squad’s success when Ireland rugby legend Brian O’Driscoll quizzed him about the outcome.

O’Driscoll recealed: ‘I asked him, ‘so, is football coming home?’

‘But he refused to say it. I think he just said he isn’t as confident as everyone else about England winning tomorrow. He said he won’t say it because he doesn’t want to jinx it.’

Prince William, 36, has been very vocal about his excitement over the Three Lions’ performance in Russia thus far. 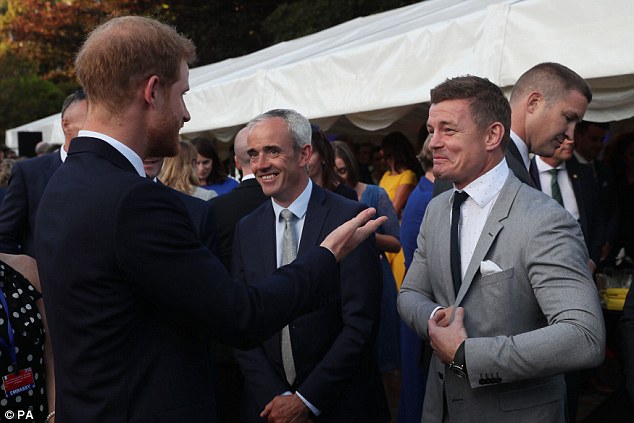 Harry refused to be pushed on the squad’s success when Ireland rugby legend Brian O’Driscoll, pictured, quizzed him about the outcome

Today he released a statement saying: ‘A new generation is enjoying the magic of this World Cup run. The whole country is right behind you tonight. Come on England – it’s coming home!’

It came after he tweeted ‘Football’s coming home’ following their victory over Sweden in their quarter-finals tie last week.

The Prince tweeted: ‘You wanted to make history @England and you are doing just that. This has been an incredible World Cup run and we’ve enjoyed every minute. You deserve this moment – Football’s Coming Home!’

Both princes will be among the millions of football fans tuning in to watch Gareth Southgate’s team in Russia tonight.

Football fever has already gripped the nation with social media inundated with memes and thousands tweeting about their anticipation.

Thousands have even picked up their own version of manager Gareth Southgate’s ‘lucky waistcoat’, hoping it will boost the players’ chances on the pitch.

Ireland MP refuses £8,000 pay increase as she orders others to...

Liverpool news: Timo Werner has made it clear he is ‘desperate’...