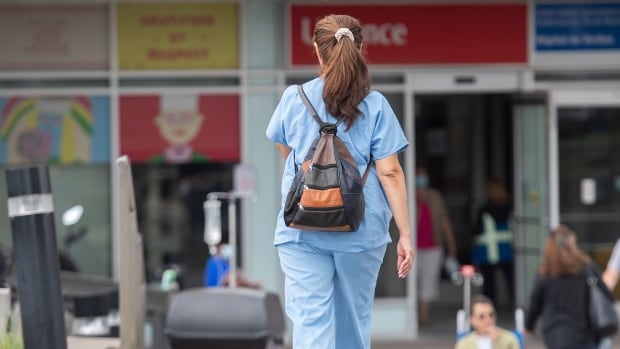 New Brunswick is using hefty signing bonuses and a plethora of benefits to attract nurses from Quebec and other provinces.

Horizon Health, a health authority that delivers medical care on behalf of the New Brunswick government, held a hiring event at a Montreal-area hotel on Tuesday.

The event sought to draw nurses interested in working in New Brunswick with an offer that includes the promise of up to $10,000 in signing bonuses, up to $5,000 in relocation costs and other benefits.

New Brunswick is not the only province vying for nurses. A widespread shortage of health-care workers increasingly has provinces competing with one another to attract qualified nurses, but experts say poaching workers from elsewhere in Canada will not address the root cause of staffing shortages.

Kerry Kennedy, director of talent acquisition with Horizon Health Network, said the Montreal event was not a job fair but was targeting nursing candidates who had expressed interest in working in New Brunswick.

“We’re all in a candidate-driven market and trying to do the best that we can to recruit and retain the nurses that we have,” she said, adding that New Brunswick’s low cost of living and good work-life balance were among the reasons that health-care workers could be drawn to the province.

Horizon Health Network is holding similar events across the country, in Edmonton, Ottawa and Toronto. Kennedy said the first 120 applicants will receive customized treatment and help to move to New Brunswick.

That “custom” treatment could include help paying for lodging or assistance with a partner finding a new job in New Brunswick, Kennedy said.

When CBC reporters attended the Quebec Horizon Health event, no nurses arrived to meet with recruiters.

Quebec is plagued by its own staffing shortages. Mandatory overtime is ubiquitous at some hospitals, like the Maisonneuve-Rosemont Hospital, where nurses staged a sit-in last week in protest of their working conditions.

Christian Dubé, Quebec’s health minister acknowledged in a statement that all Canadian provinces were facing the same labour shortages.

“It is in everyone’s interest to recruit personnel from abroad,” he said. “We have some great examples here in Quebec of nurses from around the world who are making a difference. In the meantime, we continue to work to make our network an employer of choice and to improve working conditions.”

Frédéric Lapierre, who represents nursing and cardiorespiratory staff at the FSSS-CSN, one of Quebec’s major health-care unions, said he was not surprised to see other provinces trying to recruit Quebec nurses.

“There is a shortage of nurses everywhere,” he said, “so everyone is scrambling for nurses across the provinces, and even across Quebec. I would say that it’s the same thing here. Between the hospitals, we’re also fighting over nurses.”

Ivy Bourgeault, a professor at the University of Ottawa and leader of the Canadian Health Workforce Network, said New Brunswick’s attempt to attract Quebec nurses was “telling of the challenging situation that all health systems are in across the country.”

But rather than trying to recruit nurses from their neighbouring provinces, which are also dealing with shortages, Bourgeault said provinces should work on retaining their own health-care workers.

“It’s not the best strategy,” Bourgeault said. “I’m not sure how sustainable it is, I’m not sure that makes for good neighbours and it raises a number of ethical issues. Are you taking from other jurisdictions that need it?”

Damien Contandriopoulos, a nursing professor at the University of Victoria, said provinces competing with each other to attract nurses was an ineffective way to solve problems in their health systems.

Adding more nurses to problematic hospitals where staffing shortages are ubiquitous will not make those hospitals better, he said, and nurses transplanted into a toxic environment are just as likely to leave and find another place to work.

“If we want to solve the problem for real,” he said, “we have to reduce pressure on hospitals, we have to better manage human resources and we have to try to treat nurses better in terms of protecting them from illnesses, their mental health and work-life balance.”