Demonstrators defied growing violence by Myanmar security forces and staged more anti-coup rallies Friday, while the UN special envoy for the country called for urgent Security Council action, saying about 50 peaceful protesters were killed and scores were injured in the military’s worst crackdowns this week.

The escalation of violence has put pressure on the world community to act to restrain the junta, which seized power on Feb. 1 by ousting the elected government of Aung San Suu Kyi.

Large protests against military rule have occurred daily in many cities and towns. Security forces escalated their crackdown with greater use of lethal force and mass arrests. At least 18 protesters were shot and killed Sunday and 38 on Wednesday, according to the UN Human Rights Office. More than 1,000 have been arrested, the independent Assistance Association for Political Prisoners said.

Protests continued in the biggest cities of Yangon and Mandalay, and elsewhere Friday. They were met again with force by police, and gunfire was heard. In Mandalay, Zaw Myo was fatally shot as the 26-year-old and other residents sought to protect a march by a group of engineers.

Hear ‘the voices of the people’

UN special envoy Christine Schraner Burgener said in her briefing to a closed Security Council meeting that council unity and “robust” action are critical “in pushing for a stop to the violence and the restoration of Myanmar’s democratic institutions.”

“We must denounce the actions by the military,” she said in her briefing, as released by the UN. “It is critical that this council is resolute and coherent in putting the security forces on notice and standing with the people of Myanmar firmly, in support of the clear November election results.”

Schraner Burgener reiterated an earlier appeal to the international community not to “lend legitimacy or recognition to this regime that has been forcefully imposed and nothing but chaos has since followed.”

She urged council members to hear “the voices of the people of Myanmar” and support Kyaw Moe Tun, the country’s UN ambassador who was terminated by the military after denouncing the coup in a dramatic speech to the General Assembly. The military appointed his deputy, who resigned a day later and Tun has said he remains Myanmar’s permanent representative to the UN.

Any kind of co-ordinated action at the UN will be difficult since two permanent members of the Security Council, China and Russia, are likely to veto it. 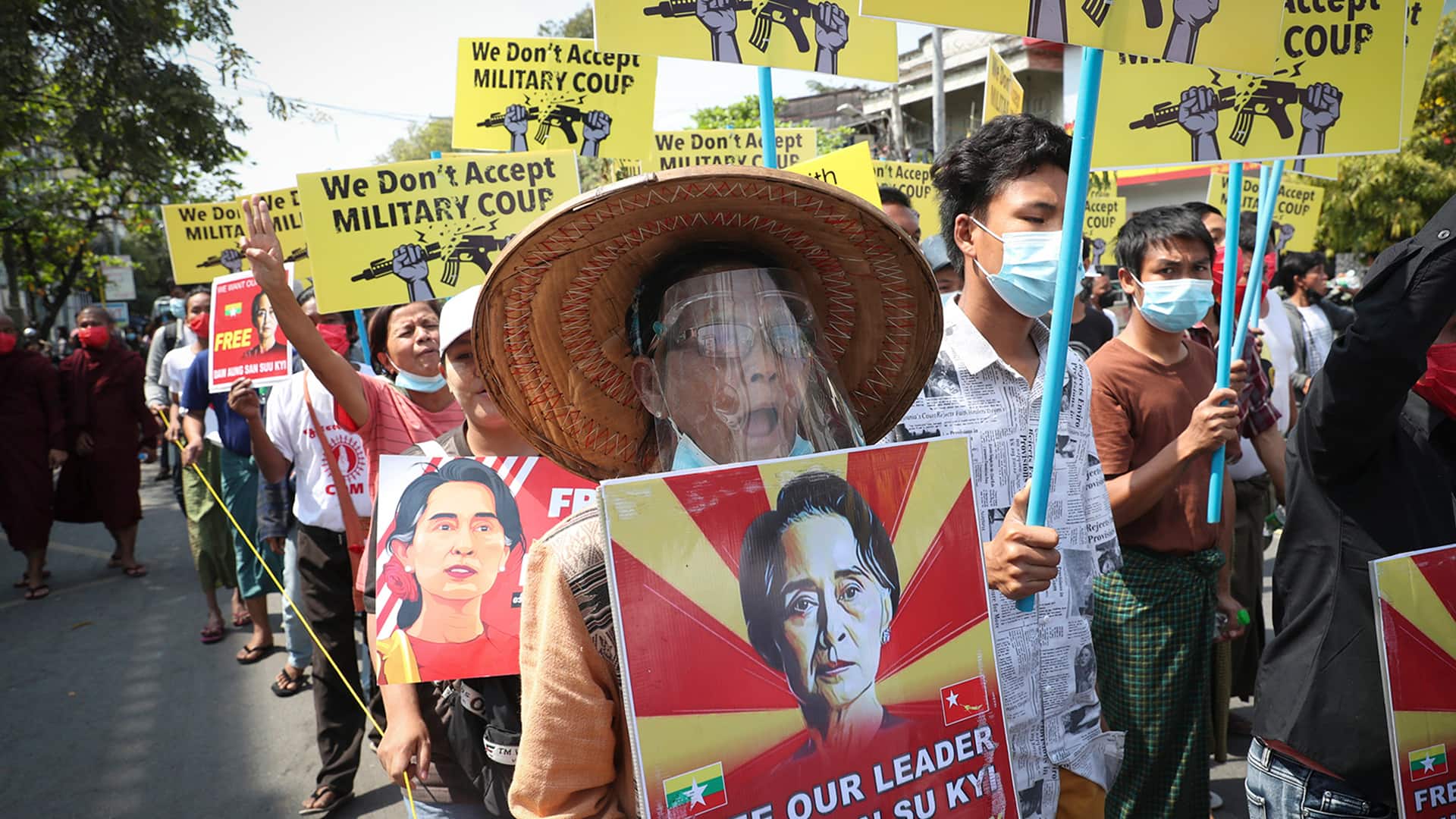 Aung San Suu Kyi made her first appearance in a Myanmar court to face new charges a month after she was detained when the military seized power. Still, amid a deadly crackdown by authorities, pro-democracy protesters are defiant. 2:05

Schraner Burgener, a veteran Swiss diplomat, said she hopes to visit Myanmar and use her “good offices” to find a peaceful solution through dialogue.

Meanwhile, the U.S. State Department said Friday that the government has taken action to prevent Myanmar’s military from improperly accessing more than $1 billion in Myanmar government funds held in the United States.

And YouTube removed five channels run by Myanmar’s military for violating its guidelines and said it is watching for any further violations. It earlier pulled dozens of channels as part of an investigation into content uploaded in a co-ordinated influence campaign.

The decision by YouTube followed Facebook’s earlier announcement that it has removed all Myanmar military-linked pages from its site and from Instagram, which it also owns.

Many cases of targeted brutality by security forces in the streets have been captured in photos and videos that have circulated widely on social media. Videos have showed security forces shooting people at point-blank range and chasing down and savagely beating demonstrators.

The U.S. called the images appalling, the UN human rights chief said it was time to “end the military’s stranglehold over democracy in Myanmar,” and the world body’s independent expert on human rights in the country, Tom Andrews, urged Security Council members to watch the videos.

While many abuses are committed by police, there is even greater concern about military forces being deployed in Myanmar’s cities that are notorious for decades of brutal counterinsurgency tactics and human rights abuses.

In Yangon, members of the army’s 77th Light Infantry Division have been deployed during protests of the coup. The 77th was also deployed in Yangon in 2007 to suppress anti-junta protests, firing on protesters and ramming them with trucks, witnesses told Human Rights Watch.

The 99th Light Infantry Division has also been deployed, including in Mandalay. It is infamous for its counterinsurgency campaigns against ethnic minorities, including spearheading the response that led to a brutal crackdown that caused more than 700,000 Rohingya Muslims to flee from Rakhine state to Bangladesh. It also has been accused of war crimes in Shan state, another ethnic minority area, in 2016 and early 2017.

A leader of barred lawmakers who say they are the legitimate representatives of the country released a letter to UN Secretary-General Antonio Guterres urging the Security Council to help end the violence and restore the ousted government. The letter asked for outside parties to help prevent human rights violations, sanctions on military leaders and military-linked businesses, a total arms embargo and penalties for perpetrators of atrocities.

The letter is signed by Dr. Sasa, who uses one name, on behalf of the Committee Representing Pyidaungsu Hluttaw, Myanmar’s Parliament, which the military has barred from convening. The lawmakers want foreign countries and international organizations to recognize them instead of the junta.

Schraner Burgener said earlier this week she warned Myanmar’s army that the world’s nations and the Security Council “might take huge strong measures.”

The Association of Southeast Asian Nations has urged a halt to violence and the start of talks on a peaceful solution in Myanmar.

The 10-member regional grouping, which includes Myanmar, is constrained from enacting serious measures by a tradition of acting by consensus and reluctance to interfere in each other’s internal affairs.

‘The height of national shame’

However, one member, Singapore, was outspoken Friday in criticizing Myanmar’s coup.

“It is the height of national shame for the armed forces of any country to turn its arms against its own people,” Foreign Minister Vivian Balakrishnan said in parliament.

But he also warned that the approach favoured by some Western nations of pressuring Myanmar’s generals with sanctions would not be effective. The U.S., Britain and several other countries have already started to use that approach.

“Despite all our fervour and earnest hopes of reconciliation … the keys ultimately lie within Myanmar. And there’s a limit to how far external pressure will be brought to bear,” he said.

South Korean President Moon Jae-in tweeted that the use of violence against the people of Myanmar must stop.

“There should not be any more loss of lives. We condemn the violent suppression of protests by the military and the police forces and strongly call for the immediate release of all those detained including State Counsellor Aung San Suu Kyi,” he said.

Why the Super Bowl is losing the 18-49 demographic