Myanmar’s new military rulers on Monday signalled their intention to crack down on opponents of their takeover, issuing decrees that effectively banned peaceful public protests in the country’s two biggest cities.

The restrictions were ordered after police fired water cannons at hundreds of protesters in the capital, Naypyitaw, who were demanding the military hand power back to elected officials. It was just one of many demonstrations around the country.

Rallies and gatherings of more than five people, along with motorized processions, were banned, and an 8 p.m. to 4 a.m. curfew was imposed for areas of Yangon and Mandalay, the country’s first- and second-biggest cities, where thousands of people have been demonstrating since Saturday.

Protesters in Yangon rallied Monday at a major downtown intersection raising three-finger salutes that are symbols of resistance and carrying placards saying, “Reject the military coup” and “Justice for Myanmar.”

There were also demonstrations in towns in the north, southeast and east of the country.

The decrees enabling the new restrictive measures were issued on a township-by-township basis, and were expected to be extended to other areas as well. They say they were issued in response to people carrying out unlawful actions that harm the rule of law, a reference to the protests.

The growing defiance was striking in a country where past demonstrations have been met with deadly force. That resistance was happening in Naypyitaw, whose population includes many civil servants and their families, spoke to the level of anger among people who had only begun to taste democracy in recent years after five decades of military rule.

“We do not want the military junta,” said Daw Moe, a protester in Yangon. “We never ever wanted this junta. Nobody wants it. All the people are ready to fight them.”

‘Democracy can be destroyed’

The coup came the day newly elected lawmakers were supposed to take their seats in Parliament after November elections. The generals have said that vote was marred by fraud — though the country’s election commission has dismissed that claim. 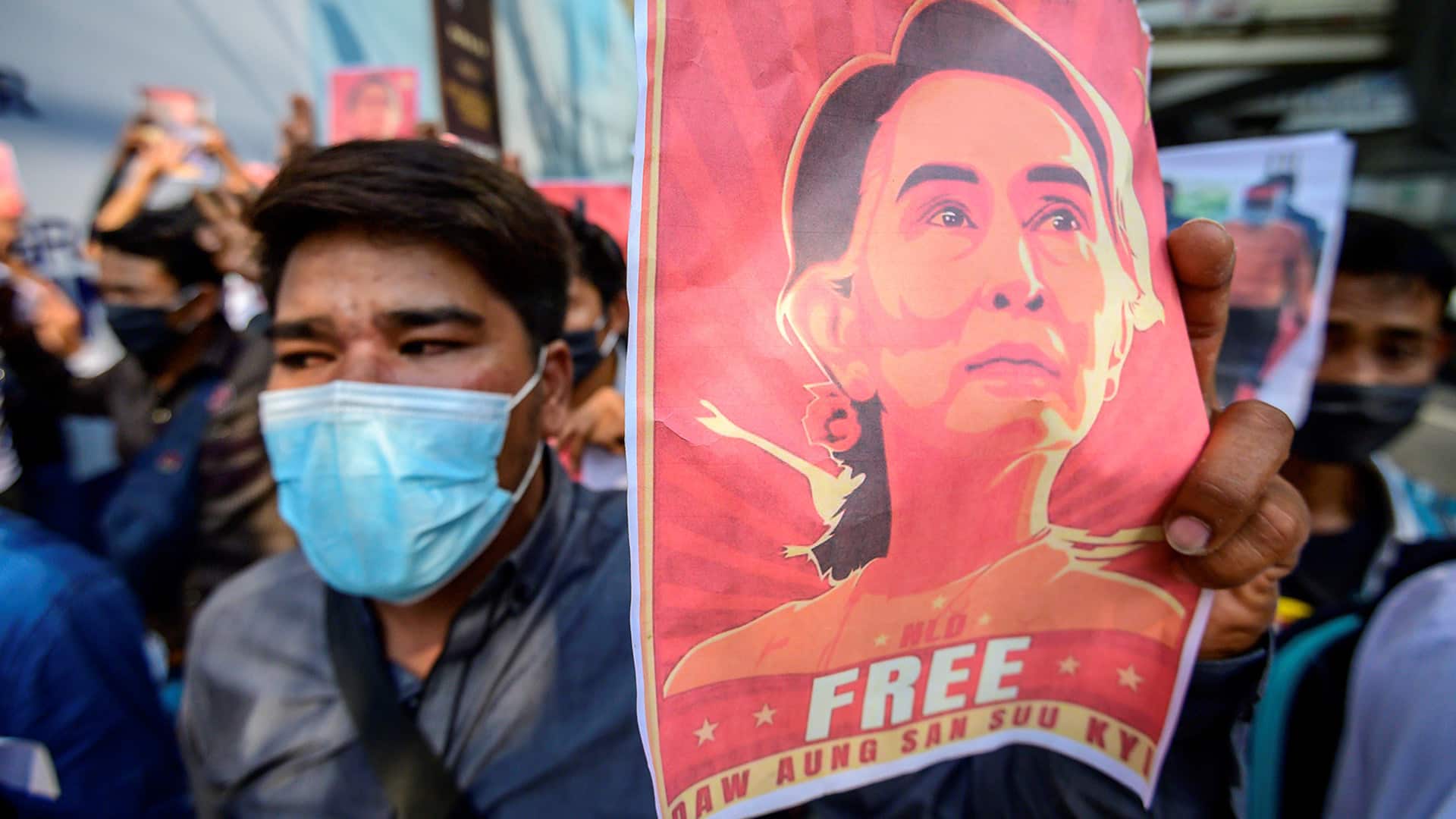 Myanmar’s military is cracking down against pro-democracy activists and protesters. People have been taking to the streets and carrying out a national strike and it has some worried that the protests, like others in the past, could end in bloodshed. 2:06

State media for the first time on Monday made reference to the protests, claiming they were endangering the country’s stability.

“Democracy can be destroyed if there is no discipline,” declared a statement from the Ministry of Information, read on state television station MRTV. “We will have to take legal actions to prevent acts that are violating state stability, public safety and the rule of law.”

However, the military commander who led the coup and is now Myanmar’s leader made no mention of the unrest in a 20-minute televised speech Monday night, his first to the public since the takeover.

Senior Gen. Min Aung Hlaing instead repeated the claims about voting fraud that have been the justification for the military’s takeover, allegations that were refuted by the state election commission. He added that his junta would hold new elections as promised in a year and hand over power to the winners, and explained the junta’s intended policies for COVID-19 control and the economy.

The growing protests recall previous movements in the Southeast Asian country’s long and bloody struggle for democracy. On Sunday, tens of thousands of protesters rallied at Yangon’s Sule Pagoda, which was a focal point of demonstrations against military rule during a massive 1988 uprising and again during a 2007 revolt led by Buddhist monks. The military used deadly force to end both of those uprisings. Aside from a few officers, soldiers have not been in the streets at protests this past week.

Photos of the standoff in Naypyitaw on Monday showed a vast crowd of protesters hemmed in on several sides by large numbers of police and police vehicles. Officers there trained a water cannon on the crowd, which was gathered near a giant statue of Aung San, who led the country’s 1940s fight for independence from Britain and is the father of Aung San Suu Kyi, the elected leader who was deposed by last week’s takeover.

Suu Kyi — who became an international symbol of the country’s fight for freedom while detained in her home for 15 years and earned the Nobel Peace Prize for her efforts — is now back under house arrest.

The Assistance Association for Political Prisoners, an independent watchdog group, says 165 people, mostly politicians, had been detained since the Feb. 1 coup, with just 13 released.

One foreigner has been confirmed held by the authorities, Sean Turnell, an economist at Australia’s Macquarie University who was an adviser to Suu Kyi’s government. He was detained Saturday under unclear circumstances.

A statement from the office of Australian Foreign Minister Marise Payne said he was being provided with consular support and described him as “a highly regarded adviser, member of the academic community” who should immediately be released.

Carrot or stick? U.S. governors try to get teachers back into schools

Nathan Henry shares pride in helping others by coming out on...