A sprawling, lumbering winter storm walloped the U.S. Northeast on Monday, shutting down COVID-19 vaccination sites, closing schools and halting transit as snow piles up from the Appalachians to New England — with the heaviest accumulations yet to come in many places.

New York City and northern New Jersey were bracing for as much as 56 centimetres of snow, and parts of New England for 30 centimetres or more. The snowfall began on Sunday night and National Weather Service warned that high winds and snowfall could persist into Tuesday in New York and Wednesday in New England.

Lara Pagano, a meteorologist with the U.S. National Weather Service, said the storm would be a “pretty slow mover” as it brings heavy snow and strong winds.

“It’s going to be a prolonged event,” Pagano said.

In Pennsylvania, authorities said a 67-year-old woman with Alzheimer’s disease who reportedly wandered away from her home was found dead of hypothermia on a street in Allentown, about 135 km northeast of the capital Harrisburg, Monday morning.

In Plains Township, about 175 km northeast of Harrisburg, a shooting that followed an argument over snow removal killed a married couple, and the suspect was later found dead at his nearby home of a wound believed to have been self-inflicted, officials in Luzerne County said.

As of Monday afternoon, as much as 43 cm had fallen in parts of Pennsylvania and New Jersey, according to the National Weather Service.

Across the U.S. Northeast, many coronavirus vaccination sites closed Monday.

The storm disrupted the second phase of Massachusetts’s vaccine rollout. A Boston site that was supposed to open Monday for residents ages 75 and over did not; but some other mass vaccination sites were open. The state was expected to get 30 to 61 cm of heavy, wet snow and wind gusts of up to 88 kilometres per hour along the coast, according to Gov. Charlie Baker.

“We’re used to dealing with snow this time of year, but it’s important for folks to take this one seriously due to the heavy snowfall, the high winds and the speed with which this snow is going to fall when it starts to come down,” Baker said at a press conference. 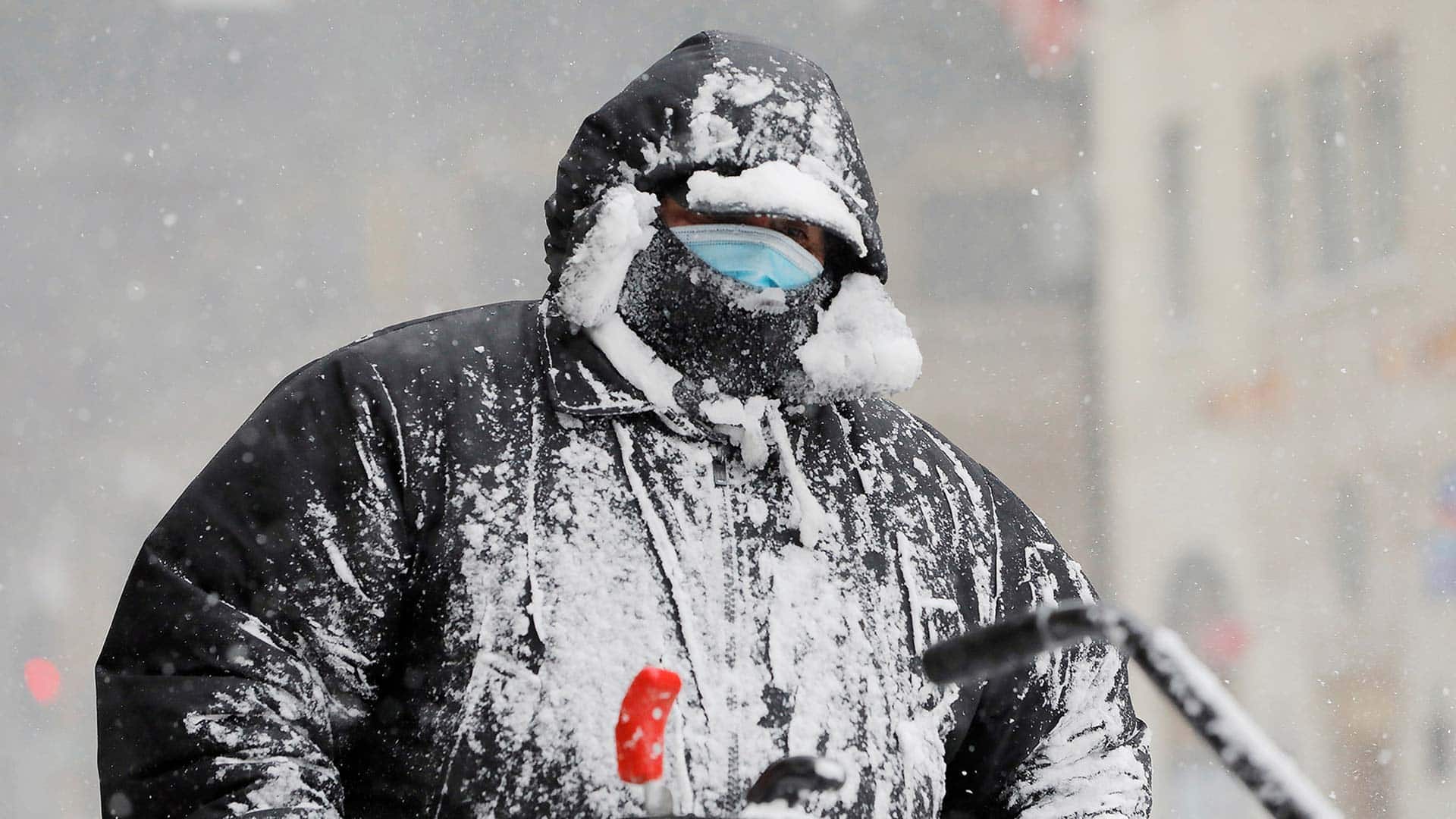 A winter storm is hammering the east coast of the United States, bringing cities from Washington to New York to a standstill. The storm is also having an effect on the pandemic response, adding further delays to the vaccine rollout. 2:00

Connecticut Gov. Ned Lamont said most vaccinations scheduled in his state for Monday were postponed, but he noted that the vaccine can be kept, refrigerated, for days.

In a school year when many students are already learning from home, in-person classes were cancelled in many places.

“I’d like to think there is still some virtual learning going on, with a little bit of time for sledding along the way,” Lamont quipped.

Amtrak cancelled all Acela service between Boston and Washington and Pennsylvanian service between New York and Pittsburgh. Amtrak’s Northeast Regional, Keystone Service and Empire Service were operating on limited or modified schedules.

In recent days, a storm system blanketed parts of the Midwest, with some areas getting the most snow in several years. Ohio, Washington, D.C., and parts of Virginia also received snow.

Snow and cold in Washington led President Joe Biden to postpone a visit to the State Department that had been planned for Monday.

White House press secretary Jen Psaki said the administration had been in contact with the governors of states affected by the weather.

Canada and allies call on Myanmar military to refrain from violence...

Microsoft Is Retiring Control Panel With October 2020 Update, Redirecting to...

Dr. Dre recovering after being admitted to hospital