Jill Entwistle looks at how different designers light the facade of a building.

Although facades are self-evidently about the exterior of a building, they cannot be considered as a separate entity. From a practical, aesthetic, even branding point of view, they are informed by the building as a whole, particularly the interior. A widespread example of the latter is the lantern effect – where the interior of glazed buildings provides the night-time illumination, or integrated lighting in the facade creates a similar effect. However, during an awards judging session recently, an eminent lighting designer raised the issue of light pollution where that approach was concerned. Clearly context, consideration and control, as in all design, is key.

The interior is also an important consideration where occupants are concerned. It’s all very well having a literally flashy media facade but not when it’s keeping hotel guests awake, or when even the most restrained exterior treatment causes glare to late-working employees with inconsiderately positioned light fixtures.

Where historic buildings are concerned the purpose is largely about revelation, literally highlighting the architectural detailing, the columns and crenellations. Where the contemporary structure is concerned it is invariably about shouting its corporate presence in an increasingly visually competitive and cluttered night-time urban environment.

Perhaps the most interesting approach is where the building is considered as much for its daytime as its after-dark image – purposely designed to allow natural light to play on and with its surface.

The Opus by Omniyat, Dubai 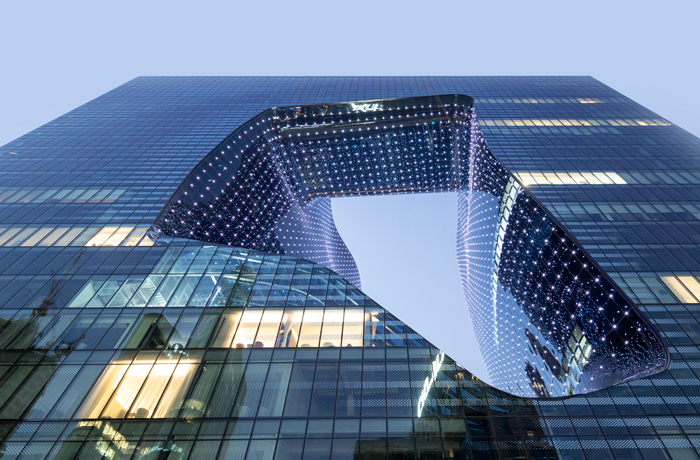 The suggestion of studded diamonds is somehow an apt element in a scheme to highlight the sculptural void in the facade of the new ME Dubai hotel in the Burj Khalifa district.

The building was conceived by Zaha Hadid back in 2007. ‘Notable to the ZHA design was the balance between solid and void,’ says DPA. ‘The design represents two towers that have converged as one, to a cube with the centre eroded to create a stunning and contrasting void. This void is an important volume, and canvas for the lighting intervention and solution to the internal skin of the building’s void.’

The challenge was to develop a visually arresting lighting scheme to ‘complement and enhance the architecture both inside and out’. The lighting equipment, including a specially developed LED luminaire, had to be carefully integrated so it could not detract from or compromise the seamless, smooth flowing form of the internal void.

By day, the building’s facade is a monumental mirrored sculpture reflecting its surroundings. After dark, the void is transformed into a dynamic lighting installation using 5,000 1.5W LED ‘points’ of light individually controllable using DMX.
dpalighting.com 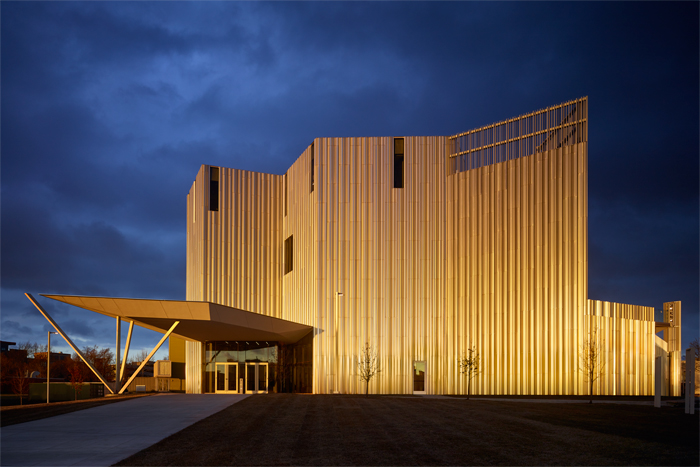 Known as Folding Light, the OCAC is a landmark exhibition and educational hub. The four-storey building has more than 700m2 of galleries for visual art, a flexible theatre space seating 200 people, a dance studio, and nine classroom workshops.

Rand Elliott is an architect who is famous for his use of light, both natural and artificial, and for his emphasis on context, history and culture. Oklahoma has big skies, he says, and he literally wanted to reflect them in his design.

‘The horizon is always visible and makes our sunrises and sunsets an uplifting experience. So, this building is inspired by our light – the light of our sky. We have created a building whose skin reacts to its ever-changing colour. The description Folding Light is a response to this experience.’

Custom-made extruded aluminium fins extend from the ground to the top of the building, forming a semi-reflective skin that mirrors the constantly changing weather conditions. The panels are strategically angled to ‘capture, hold, reflect and redirect the light as it moves through the sky’, allowing the building to become part of the landscape, melding with its urban setting, reflecting its context and character. 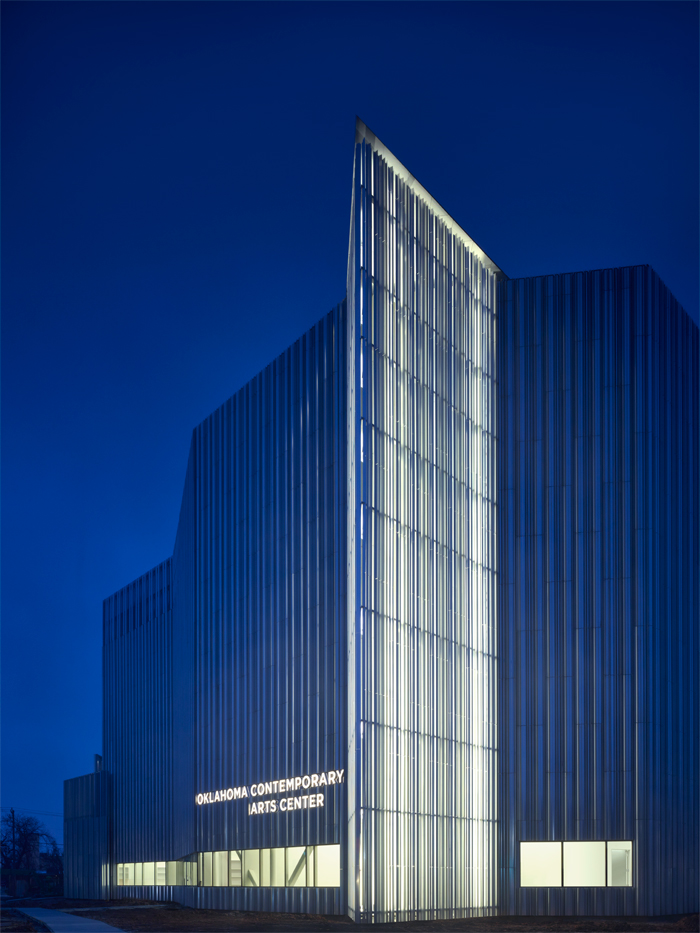 Elliott has crafted both interior and exterior into a creative whole. The exterior walls fold as they wrap the interior space.

As a highly exacting use of the lantern effect, the aim here was to create a homogeneous glowing facade. The difficulty was exacerbated by the client opting for the concept of a glowing white building after most of the architectural design had been completed, when sections of the facade had been made inaccessible. The aim was to achieve ‘a gem-like presence in the darkness, whilst respecting the building’s surroundings’.

The lantern approach was arrived at because it was decided that lighting the facade from the inside out would give a better effect than washing the outside with light. It also meant that the majority of the luminaires could be interior-rated, making them cheaper and concealed, preserving the minimalism of the exterior. Either way, the varying transparency of the Linit low iron glass facade and the additional variable factor of the interior lighting conditions made the proposition complicated.

The Buro Happold lighting team carried out a study to determine where interior lighting would contribute to the effect, where walls obstructed the light to the facade, and which areas could not be lit from the inside.

The upshot was a specially designed mechanical track and rail system to facilitate the installation of luminaires in challenging areas, such as the 16m section of glass that was enclosed by a concrete wall from behind and weather-sealed. The facade lighting uses a linear LED luminaire adapted with specific optics and output, to meet the requirements across the facade and cope with the varied integration details.

Additional lighting elements were incorporated into the entrance canopy and ground floor perimeter. Combined, these create a welcoming threshold light that connects with the landscape.
burohappold.com/specialisms/lighting-design 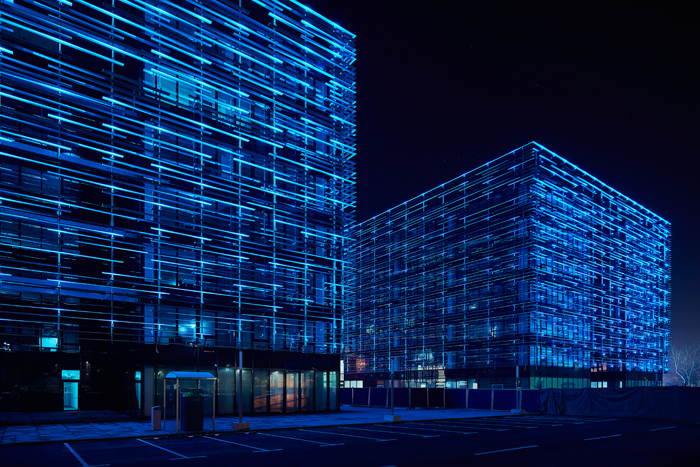 Matrix is a LEED Gold-standard twin building development in the central business district. The challenge was to devise a creative concept that had a simple installation, with all the wiring concealed, and no installation boxes or electrical panels allowed on the facade or on the roof.

The solution is ingenious. The element illuminated is the brise soleil, rather than the buildings themselves. Given the horizontal nature of the structure, the obvious solution would be a linear fitting, but Skira chose instead to exploit the 360° blade optics of iGuzzini’s Trick luminaire.

Each small, single point fitting visually projects a line of light along the components of the brise soleil, which in turn act as individual secondary reflectors.

Apparently random patterns of light were programmed to create dynamic, colourful scenes, accentuating the horizontal linear architectural detail on both buildings. Special scenes can be programmed for festivals or national holidays. Bespoke fixtures were designed with a new base, which contains the built-in DMX-RDM electronic driver, completed with in-out connector for plug-and-play connection (the custom version has since become a standard product). The lighting is connected via a fibre-optic cable to create controlled scenes on both buildings simultaneously.

Dollarama still bullish on expansion as profits slip amid pandemic

The Drop’s Newest Summer Collection Is Live for a Few More...

Haas unable to fire up engine until Bahrain

Canadian bus companies have plans to fill the gap left by...

Brief Encounters: Indus by Shneel Malik is a biodesign project to...