A line of light sounds a simple proposition. And now we have hopefully seen the back of lumpy, lolloping scalloping (no prejudice there then), it has become a more common technique. But there are a surprisingly varied number of ways that lines of light can be expressed.

They can underscore and delineate the architecture, or slice through surfaces for decorative effect. They can be concealed in coves or allow ceiling planes to float or take a more overt, graphic path – recessed to form parallel linear ceiling elements or, a recent trope, zigzagging across walls, ceilings and floors.

They can lead the eye to a focal point or provide a navigational clue for the arriving guest or traveller. The strip can be pin sharp or gently diffused, blurring the line as it were, softening boundaries.

The following projects and products demonstrate a glimpse of the possibilities that can come from drawing a line. 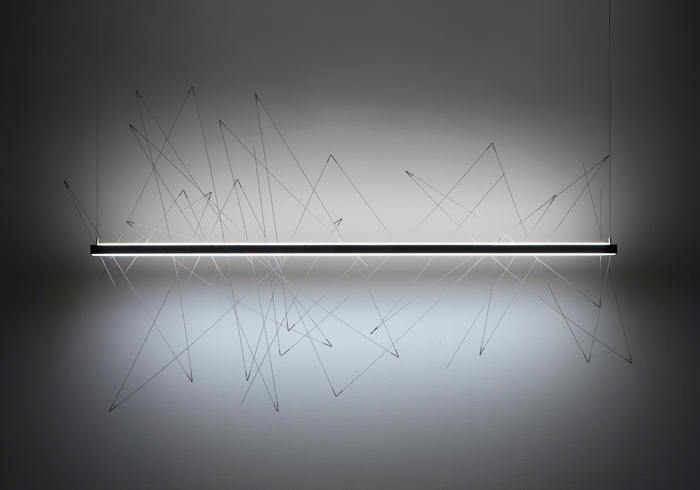 Graffiti is a classic fitting by Yamanaka, who not only likes to manipulate light for effect but often sees it as a starting point for his designs, many of which have been for the Italian company founded in the 1970s by architect Paolo Pallucco. This sculptural fitting, in pendant and wall options, is as much about lines of shadow as lines of light. ‘It creates a game of light during the day; thanks to the shadows that are created on the wall and the reflections of the sun on the metal tubes, Graffiti decorates and illuminates even when it is off,’ says Yamanaka.

Typical of the designer’s penchant for playfulness, the metal tubes can be doodled with to create different scribbles in the air: ‘I like to think that design is also a game, an object with which people can interact and that can be modified according to their own taste by creating a customised design. Light is well suited for this purpose.’
pallucco.com 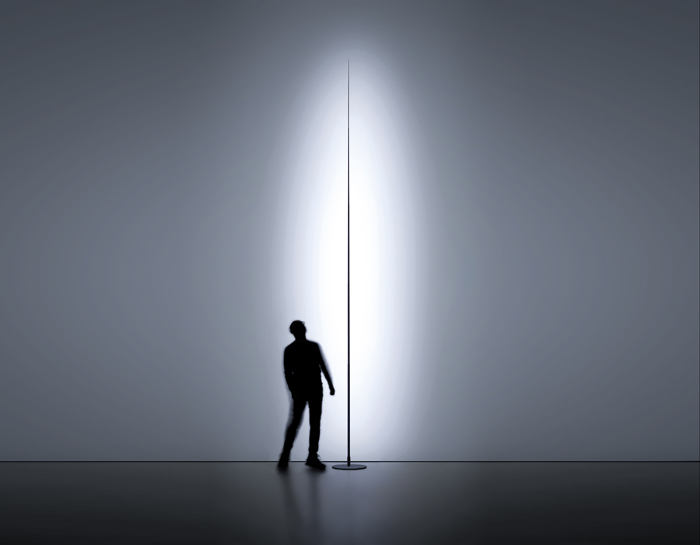 Groppi is the master of minimalism. His latest floor lamp, Origine, available for both interior and exterior applications, typically reflects his pure, pared-down design. It has to be said that you wouldn’t rate its chances in vandal-prone territory, but the Italians tend to design in a spirit of optimism. Mounted on a circular base, its spindly, impossibly tall stem tapers at the top, the whole producing a diffuse linear glow on a vertical surface. It comes in 290cm, 390cm and 490cm versions for indoor use and in the tallest size for outdoors. With a respective output of 20W (1600lm), 30W (2400lm) and 40W (3200lm), the colour temperature is 3000K (CRI 90).
davidegroppi.com 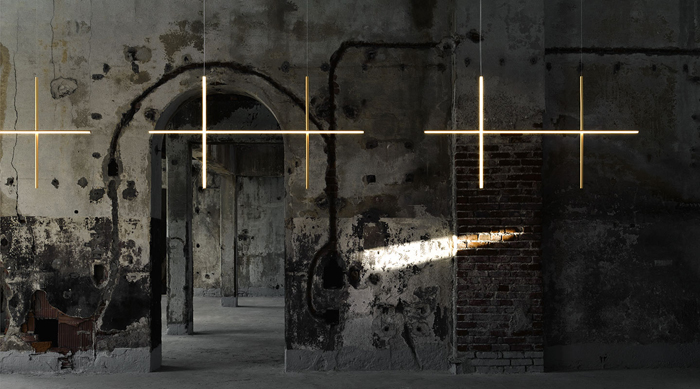 The Coordinates collection, which evolved from the original design by Anastassiades for the revamp of New York’s famous Four Seasons restaurant, features a series of interlocking linear LED luminaires. Apparently they were inspired by ‘the mathematical precision of the Cartesian grid’, expanded to three dimensions. ‘Coordinates is a lighting system consisting of horizontal and vertical strip lights that form illuminated grid-like structures of various complexities,’ says Anastassiades. ‘The system can be easily adapted for different environments of varying scale.’

Made from extruded aluminium with an anodised champagne finish, and an opal-white platinic silicone diffuser, the collection comes in a wide range of set configurations, including four suspended chandeliers of different sizes and three ceiling-mounted luminaires, available in two lengths to suit both standard and high ceilings. There is also a repeatable module that can be suspended or ceiling-mounted, designed for impressive, large-scale installations.

The Coordinates range is complemented by a vertical floor lamp with a simple round base and two lighting bars, which can be set at the preferred beam angle during assembly.
flos.com 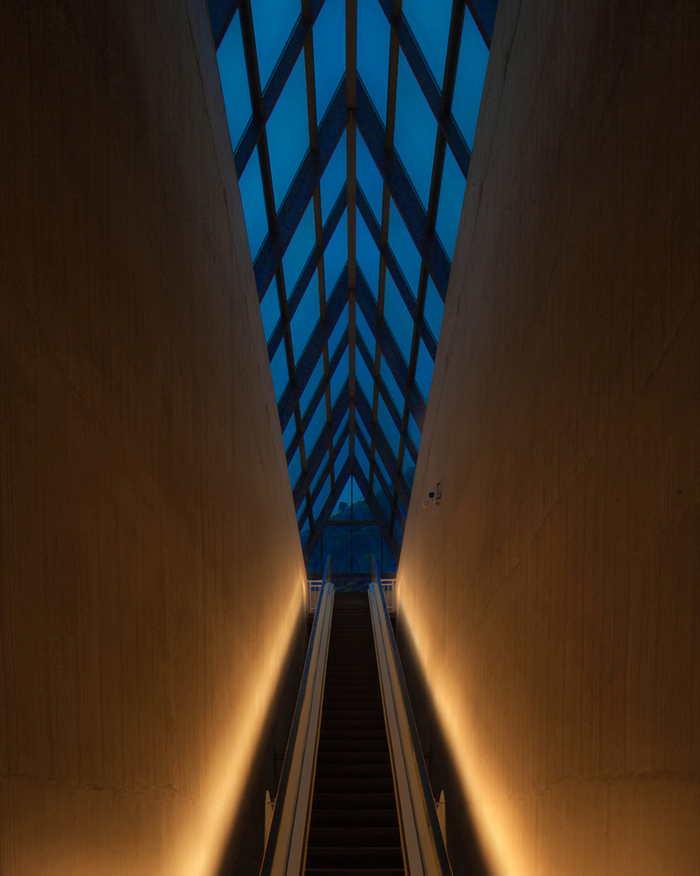 The distillery for Lang Jiu – a variant of the liquor mao-tai – located in China’s Sichuan province is now open as a visitor centre for tastings and sales, and as a holiday facility. The process of producing the spirit involves fresh spring water, and ageing in clay pots, made on the site.

Lines of light, this time softly defined, are used throughout the scheme to subtly delineate the architecture, to create a sense of warmth and welcome, to help navigation and, in their understatement, to add a sense of drama. The techniques are classic: concealed linear lighting in coves, stair recesses and handrails, or the combination of up and downlights to form a ribbon of light in vertical niches.

Combined with gentle washes of light to the facades, the composition is restrained and perfectly balanced.

Restraint was necessary in a dark rural setting. ‘The challenge was to find the common ground between architectural form and natural environment,’ says BPI. ‘Light is visible and fixture is invisible, providing visitors with a pure experience. As night falls the building blends in with nature and the lighting, forming a tranquil picture scroll of traditional Chinese art.’ brandston.com 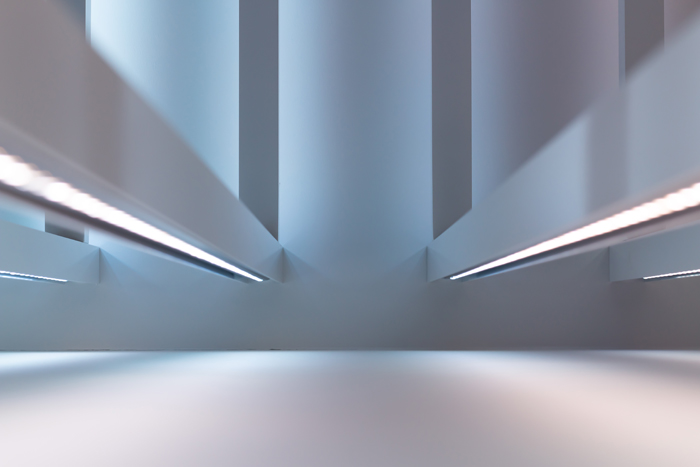 Art, branding and public/personnel relations all combine in a cutting-edge installation for Finnish clean energy company Fortum. The Transition Tunnel welcomes both clients and employees into the working space, with the lighting changing according to various stimuli: external data such as the weather or public transport time schedules, and the movement of the people themselves.

Using only indirect lighting, pixel-controllable luminaires are integrated into linear aluminium profiles that stripe the tunnel walls and ceiling.

Camera technology is used to track people flow, which then creates another level for the light patterns in the space.

‘Light walks with you,’ says LDC. The concept is that the ever-shifting patterns on the walls and ceiling invite people to ‘join the change’, which is one of Fortum’s key messages. ‘It shows how people can change things through their own actions,’ says Susanna Kallio, creative director and founder of architects Kohina.

‘It sets the scene for a really positive, comfortable day at the office,’ says Fortum head of brand Aki Koskinen. ‘It feels magical, exciting and relaxing at the same time.’ Skandal Technologies, which specialises in control systems for real-time environments, supplied the RGB pixel-controlled luminaires plus Art-Net drivers, four cameras, and Skandal Poet software and hardware.

‘This project uses a never before seen commercial lighting control software that delivers landmark connectivity between cyber and physical space,’ says LDC director Jari Vuorinen. ‘loT is no longer just a buzzword in this project.’
ldcol.com 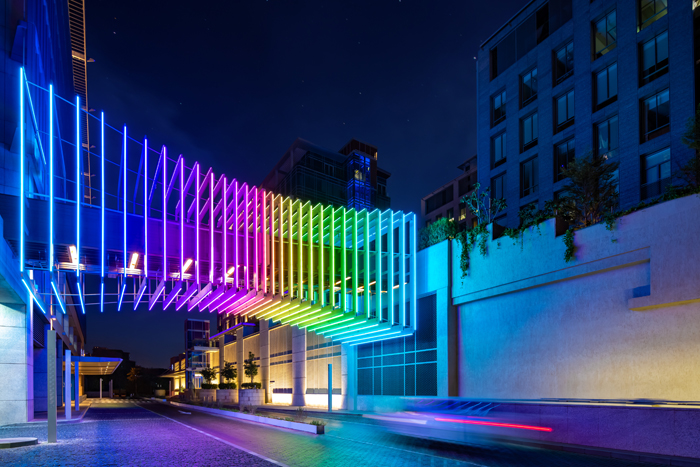 One of the interesting aspects of this scheme for two identical bridges is that it shows two contrasting treatments of light lines – one colour-changing or white light (exterior) and one white light (interior) – and also two different lighting techniques for achieving them. It combines a dynamic exterior with an immersive interior.

Located in the heart of Dubai, the DIFC is one of the world’s top financial centres and the leading financial hub for the Middle East, Africa and South Asia. The two bridges serve as the connection between the high-rise buildings that frame either side of the street, and are part of the newly regenerated Gate Village, which aims to create a new destination space for locals and tourists alike.

This scheme is about making a splash and creating a sense of energy in the space – and nothing does that like colour when used appropriately. Linear RGB media tubes are mounted onto the exterior ribs of the bridge ‘to strengthen their architectural shape and provide a visually stimulating display when they are in dynamic colour-changing mode’, says Nulty+ projects director Ahmed Saliem.

The exterior treatment is echoed inside the bridges, with 360° lines of white light, created through the optics of a single, centrally mounted ceiling fitting – an impressive technique pioneered by iGuzzini with its Trick fitting.
nultylighting.co.uk

There are countless linear systems around, so other brands and approaches are most definitely available. A recent one is the 35 Linear from Aria, comprising aluminium linear elements with an opal polycarbonate diffuser. With 360° light distribution, the system has three different modes: indirect diffused uplight, direct diffused downlight, and accent lighting (from the Nanoperfetto 35 miniature spot), all of which can be controlled independently for different permutations.

One notable feature is the smoked diffuser that enables a continuous effect when the light is off, giving the impression that the track and the diffuser are one and the same. When switched on, the diffuser provides soft, indirect light.

With applications in retail, hospitality, office and other sectors, it can be configured in variety of ways, and either as a subtle concealed detail or a centrepiece installation (including colour changing).

The system comes in a range of colour finishes and also a choice of colour/colour temperature options: dim to warm, tunable white, RGB, RGBW and single-pixel.
aria.lighting

How to Pit an Avocado Without a Knife

You’ve had your 2nd dose. What’s safe to do now?

The Longest Road On Earth Arrives May 27

Nikki Bella Is ‘Almost Back to Her Pre-Baby Body,’ Shows Off...