THE HUMAN-CENTRIC lighting market was worth $810m in 2019 and is set to grow to $3655m by 2024 – a CAGR (compound annual growth rate) of 35.2 per cent. And yet, for many professionals in the property sector, the term has become a health wash marketing term for premium lighting products that make vague but extravagant claims for their ‘health and wellbeing’ benefits. There is a perception that human-centred lighting is expensive and complicated – a ‘nice to have’ cost rather than added value. As a result, there is a risk that designers and specifiers are missing out on the substantial commercial opportunities offered by some remarkable innovations in lighting technology.

For example, light is one of the core criteria to achieve WELL certification, a standard that can deliver an impressive uplift in property value: this article suggests a seven per cent increase in rent, six per cent of tenant retention and eight to 10 per cent increase in value. And even marginal improvements in employee performance really add up – an increase in productivity of just 0.5 per cent adds up to a nearly 300 per cent ROI for a large company.

So what is ‘human-centric lighting’? As the name suggests, it is a solution that centres on the needs of the humans in the space. And, for the first time in history, it is possible to deliver lighting systems (integrating daylight and artificial light) that begin to approach the dynamic conditions that we evolved to thrive in: bright, blue-rich sunlight during the day, warm, low-level firelight in the evening and the glimmer of starlight at night.

The light levels from day to night range from 10,000 lux on a bright day to five to 10 lux in starlight, but the difference between the brightest and darkest shade of a natural scene is rarely more than 50 per cent – for those of us in the north at least. The sunlight that we see is merely the ‘visible’ part of the balanced electromagnetic spectrum that ranges from high-energy microwaves to radio waves and includes all the colours in the rainbow. A fourth critical quality of sunlight is that the sun delivers a steady stream of photons. 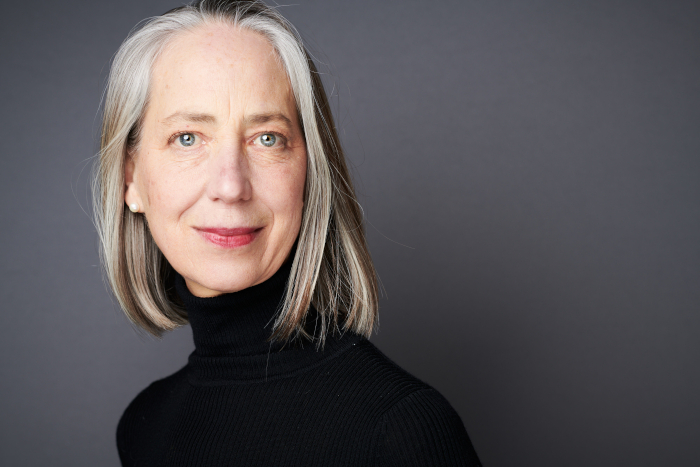 ‘80 PER CENT of the people who buy lighting have little or no training. Their purchasing decisions are often driven by short-term capital expenditure rather than longer term operational costs or environmental impact. A fragmented manufacturing sector that has made confusing or exaggerated claims for the benefits of “human-centred lighting” products rather than an integrated approach that includes daylight, robust controls and circular design, has compounded the issue.’ Dr Shelley James, Luna Pro launch press release. Image Credit: MARCUS AHMAD

And the benefits? A growing body of evidence suggests that humans are healthier and happier, and do better on pretty much every measure when they spend time in spaces that deliver those core properties of natural light: brightness, timing, spectrum and contrast. They prefer to live and learn, work and heal in spaces that offer that life-affirming environment.

The right light, at the right time, in the right place (a now familiar phrase devised and trademarked by dpa lighting consultants) can improve alertness, social interaction, memory and accuracy, speed recovery from illness, improve mood and cut cognitive decline in people living with dementia. Research based on more than 700 office workers across Europe found that 80 per cent said that having good lighting in their workspace is important to them, and yet 40 per cent say they have to deal with uncomfortable lighting every day. Bright light during the day can improve accuracy, alertness and quality of sleep in students and office workers alike. The quality of the built environment can improve student attainment by up to 17 per cent.

The list of benefits is seemingly infinite. Full-spectrum light (that includes a balanced spectrum of wavelengths) has been shown to improve mood and sleep quality. Bright light therapy is more effective than anti-depressant drugs. There is some evidence that full-spectrum bright light may even be able to slow the development of myopia: a tripling in the number of diagnoses among six to eight year olds in lockdown has been directly linked to a sharp reduction in the amount of time outside.

The Luna Pro campaign, sponsored by six leading international lighting manufacturers (Bios, Phos, Glamox Luxonic, Seoul Semiconductor, Signify and Zumtobel) sets out to challenge the perception that human-centric lighting is ‘expensive and complicated’. It brings together industry bodies, academics and key players from across the value chain to make the case for healthy lighting.

The campaign includes a ‘toolkit’ of written and audiovisual resources delivered on social media platforms, written articles and online events. Through a series of interviews, successful business leaders from around the world outline the reasons for investing in lighting. They explain how they are making the numbers stack up and how they are seeing their investment pay off many times over. The programme has reached more than 12,000 professionals. In addition there are plans for an upcoming book, events with key players from across the property and construction sector, and the launch of an international research partnership with Professor Russell Foster of Oxford University. Foster is a pioneer in the discovery of the third non-visual receptor in the eye and leading authority on the importance of lighting for the human circadian system.

So how does the business case stack up? It has to be said that high-performance light fittings with integrated controls cost more at the outset. But, given that the building will need lighting anyway, that incremental cost becomes marginal seen in the context of the build and of the asset overall, including the people who will work there. The product itself only represents around 50 per cent of the installed cost. Taken in the context of a refurbishment or new build, the additional investment over and above a ‘basic’ lighting provision ranges between five and 10 per cent. The average running cost per hour over the lifetime of the product is equivalent, but as high-quality fittings last longer, maintenance and downtime costs are reduced.

When it comes to the environment, sensors and controls can cut energy use by up to 80 per cent and luminaires designed for repair rather than replacement can radically reduce the carbon footprint of this multibillion- dollar sector which currently throws 80 per cent of its waste into landfill. 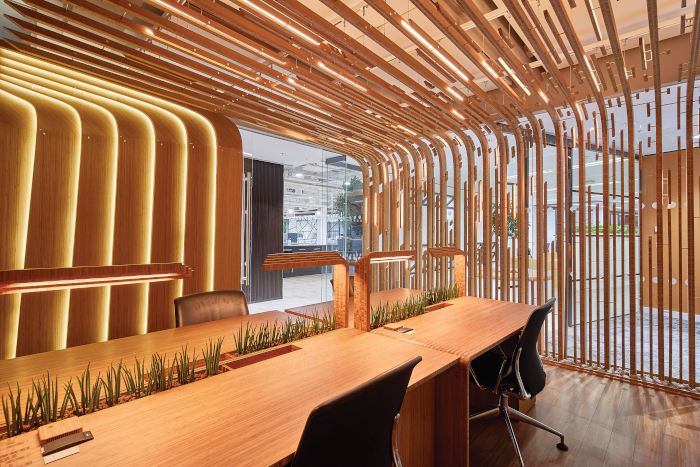 An experimental environment was created by DaeWha Kang Design for facilities management company Mitie comprising the Living Lab. It’s now an immersive working environment where the light is cool blue in the morning, brilliant white in the afternoon, and fire-like orange later in the day. Image Credit: TOM DONALD

Integrating daylight and considering other factors such as the reflectance of the surfaces in the room can improve the environmental performance by up to a further 25 per cent. Jim Collins, of Annell Lighting in Sweden, points out that he was able to demonstrate a return on investment for the complete replacement of the luminaires in his office within seven years through energy saving alone.

Given that people represent up to 90 per cent of a business expense and that the average cost of hiring a new team member in the UK ranges from £12,000 to £20,000 for a manager on £60,0009, it is clear that taking lighting seriously can give an organisation a head start. Erik Askensjö, managing director of industrial components giant Schaeffler in Sweden, explained that his investment has already paid off with staff so proud to show the refurbished office that they have been inviting their families to visit. Ed Russell, chief executive of WCS Care in Warwickshire, saw his staff retention rise and the wellbeing of his residents transformed for the cost of selling one additional room in his 40-bed facility for a year.

Another example is award-winning property developer Iain Johnson of Allect International. He attributes his ability to consistently command 10 per cent premium pricing, an impressive 67 per cent client retention rate and a track record of zero snagging down to his collaboration with lighting designer Rebecca Weir of LightIQ and his team of in-house installers. According to Johnson, it is all about placing the client’s need for a life-affirming space at the heart of every project.

That is humanity-centred lighting. It is a solution, not a product. And seen in the context of the overall cost of a building and its lifetime in use, it could just be the best investment a business could make.
www.ageoflightinnovations.com/interviews

DR SHELLEY JAMES is founder and director of specialist light consultancy Age of Light Innovations and responsible for initiatives designed to build bridges between the worlds of art, technology and business to help people see the power of light. The latest is the Luna Pro Campaign. She is currently Artist in Residence at the Bristol Eye Hospital and Associate Artist at the Institute for Advanced Studies at University of London. She has spoken at the Royal Society and recently appeared on the BBC series Revolutions: Ideas that Changed the World.