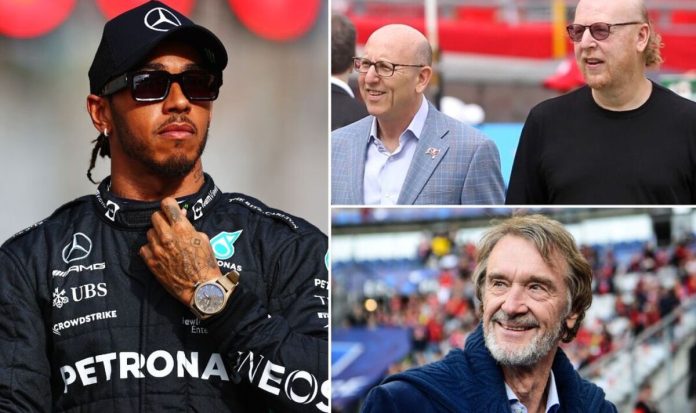 Lewis Hamilton is reportedly uninvolved in Sir Jim Ratcliffe’s bid to buy Manchester United despite the seven-time Formula One world champion starting to invest in the sporting world. The 37-year-old has grown close to the British billionaire due to Inoes’ considerable stake in the Mercedes team previously describing him as a ‘partner’.

The Glazers originally put United on the market in November with the family announcing that it was ‘commencing a process to explore strategic alternatives’ for the club with a full sale considered to be the most likely option.

On Tuesday, Ratcliffe became the first potential investor to confirm he was interested in a takeover of United via a statement released through his company Ineos. Bids are also expected from the United States, Middle East and Asia in what is expected to be one of the biggest sports deals of all time.

There had been some speculation that Hamilton could be involved with the bid given his close links with Ineos that he has developed through Mercedes. The Brit has also started to invest in the sporting world over the last 12 months. He was initially involved in Sir Martin Broughton’s failed bid to buy Chelsea before going on to buy a stake in the NFL franchise the Denver Broncos.

However, he currently will play no part in Ratcliffe’s takeover according to the Press Association, taking no active interest in the United bid at this time.

“But I do want to get more and more involved in teams because I really do believe in black ownership and black equity because there is a real lack of that in sport.”

Should Ratcliffe and Ineos’ bid for the Red Devils be successful it will be just the latest addition to a burgeoning sports portfolio. In addition to Mercedes, the group hold significant shareholdings in New Zealand Rugby and the Team Sky cycling team (later rebranded to become Team Ineos) while football clubs Nice and Lausanne-Sport are also under their ownership.

Only time will tell who the new owners of United will be but it is certain to be one of the biggest deals in global sporting history.

Chelsea to wrap up Jules Kounde transfer ‘in the coming days’...

Tottenham news: Spurs warned ‘they have overspent by £30m’ on Antonio...