Deep in the heart of Park Slope, my family and I sat at my sister’s wedding rehearsal dinner, eating and drinking merrily, as a wedding party does. Up until that point, my day had been spent in my small Brooklyn kitchen, baking cakes in five of my sister’s favorite flavors (pistachio, black sesame, lemon, chocolate, red velvet) for what would be my very first wedding cake. It was epic—enough for a wedding four times the size of my sister’s—and I was a very proud maid of honor.

But at the end of the night, I was a very annoyed maid of honor when the bridezilla demanded that she would like a funfetti cake at her wedding. To her credit, I’m exaggerating when I say “demanded,” but still, I couldn’t believe that it hadn’t occurred to either of us until then that her cake should have been funfetti. Every bride who grew up in the ’90s should have a funfetti cake, or something.

Although I told her that I would absolutely not be making any more cake that day, I knew I had no choice. I swung by the Key Foods on my way home and wrote my speech as I whisked the oil and eggs into a boxed mix. To her delight, as signified by the top-of-her-lungs shriek in the middle of a jam-packed Dressler, the top layer of her cake was funfetti and all was right in the world.

So consider it my revenge that for my wedding this year, I will be having my sister make a three-tiered funfetti extravaganza—and no, cake from a box is not allowed this time. I’ve given my sis a head start though, with days and days of recipe testing. Here is my tried-and-true method for making funfetti cake (also known as confetti cake, sprinkle cake, or straight up birthday cake), straight from one very tired maid of honor.

What Is Funfetti Cake?

Allow me to let you in on a little secret: Funfetti cake is the best cake! There’s a reason why both my sister and I requested it for our wedding day. A day of eternal love should have an epilogue dessert course that we both love too: funfetti. Traditionally, funfetti cake is made with white cake mix (something close to angel food cake is ideal) and lots and lots of rainbow sprinkles. It shouldn’t taste like vanilla cake with sprinkles. It should taste like, well, funfetti cake, which is in a league of its own. Of course, during the holidays you’ll probably find funfetti cake mix made with red and green sprinkles.

The key to a true funfetti cake is a light and fluffy cake batter, baked, and frosted with vanilla buttercream. Using cake flour and egg whites will help you achieve a cloudlike cake with a fine crumb. I’ll chat more about vanilla extract shortly, but it’s also an important ingredient for homemade funfetti cake.

Aside from the colorful sprinkles, I believe the thing that everyone loves about funfetti so much is that it’s not *too* artificial tasting. The boxed cake mix, that is. It tastes like everyone’s childhood and the fact that it’s so airy means you can eat a big wedge of it and then another and then another.

At first thought, a homemade funfetti cake seems like an easy task: Just fold a bunch of sprinkles into a vanilla cake and wham bam, you’re done. Wrong. Funfetti is not that simple. Funfetti cake is a complex being who has issues because when anyone tells him to just act natural, he fails. The secret to funfetti is that funfetti in his most natural element is, in fact, slightly artificial. Here’s why:

Artificial vanilla works best. This is a tip I picked up from Marian Bull, who learned at a Momofuku Milk Bar cake class that McCormick’s clear imitation vanilla is way closer than an all-natural vanilla extract to achieving that nostalgic flavor we get from boxed cakes. Try it and you’ll understand. 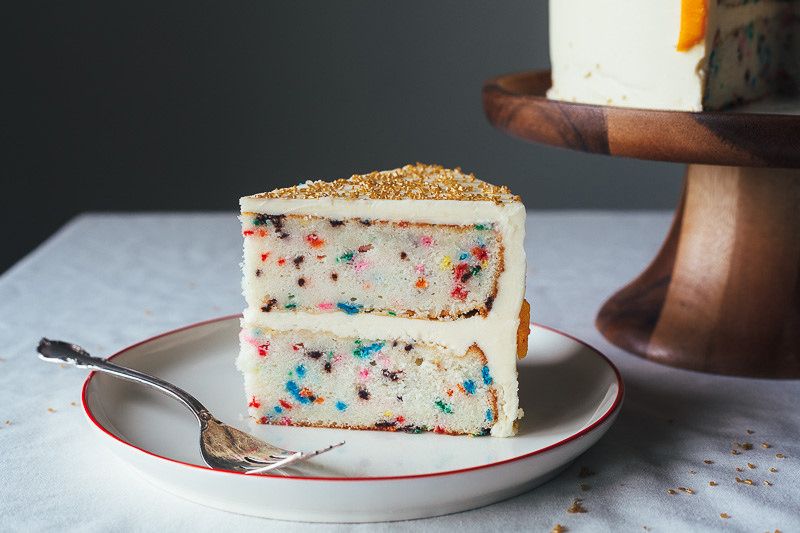 2. Not every vanilla cake will work for funfetti.

The batter needs to be thick enough to suspend the sprinkles so that they don’t all fall to the bottom when the cake is baking. 100 percent oil-based cakes need not apply. We need the volume and structure from the creamed butter and sugar to suspend our sprinkles. We also need that *tiny amount* of water present in butter to encourage a *tiny amount* of gluten formation—structure is a good thing to have in a many-tiered wedding cake, after all. I did include some oil to help ensure an even crumb that stays tender and moist.

Egg yolks are not welcome here, since we want the cake to be light enough in color that the sprinkles really shine. Hence, only egg whites in the batter.

How important is the cake flour, you ask? Very good question. To answer that, we need a bit of cake science, so bear with me. Cake flour is ground from soft winter wheat, to all-purpose flour’s *hard* winter wheat. Soft wheats have less gluten—and thus, less protein—than hard wheats. Think of cake (*yum, cake*) and its ideal texture: soft, tender, moist, and crumbly almost. You’re not going for the chewy texture you get from the  “strong* gluten networks in sourdough breads or pizza doughs.

Cake flour is also bleached with chlorine. This bleaching process not only makes for a whiter cake (remember, we need a light, neutral backdrop to really let the funfetti shine), but makes the starch in the flour more absorbent, and the gluten even weaker. In cake, water and milk-holding starch translates as “moist,” and the weak gluten structure translates as “tender.”

I decided to go with a simple, quick American-style buttercream, for the sake of ease and time (and my sanity). American-style buttercream requires just four ingredients, and whips up rather quickly. But, if you want to swipe a colored icing over your funfetti cake, go for a glossy white meringue-based icing, like Italian or Swiss buttercream, instead. If coloring doesn’t matter to you, and you want a richer-tasting frosting, go for French-style. In addition to butter and sugar, French-style buttercream calls for whipped whole eggs and egg yolks. This makes for a custardy, lovely, pale yellow frosting.

Alright, got all that? Good. Go have fun(fetti)! 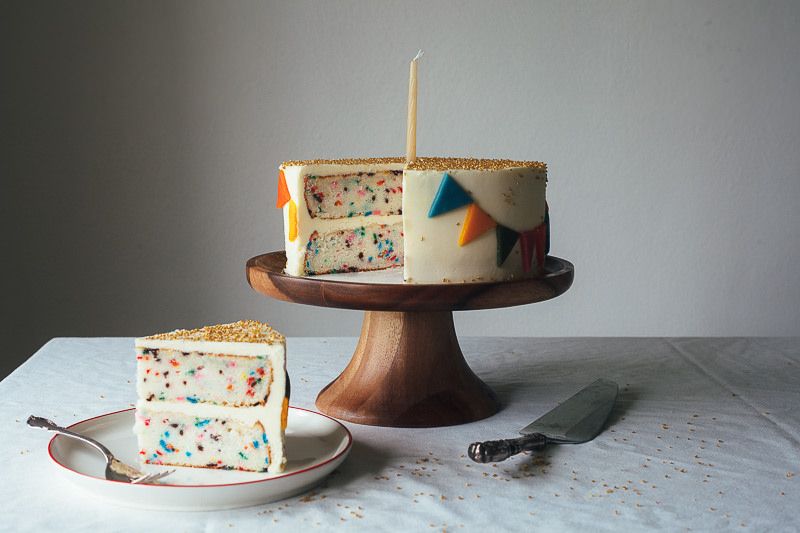 Preheat oven to 350°F. Grease two 8-inch cake pans. Cut out circles of parchment paper and line the bottom of the pans, then lightly spray the parchment with nonstick baking spray. 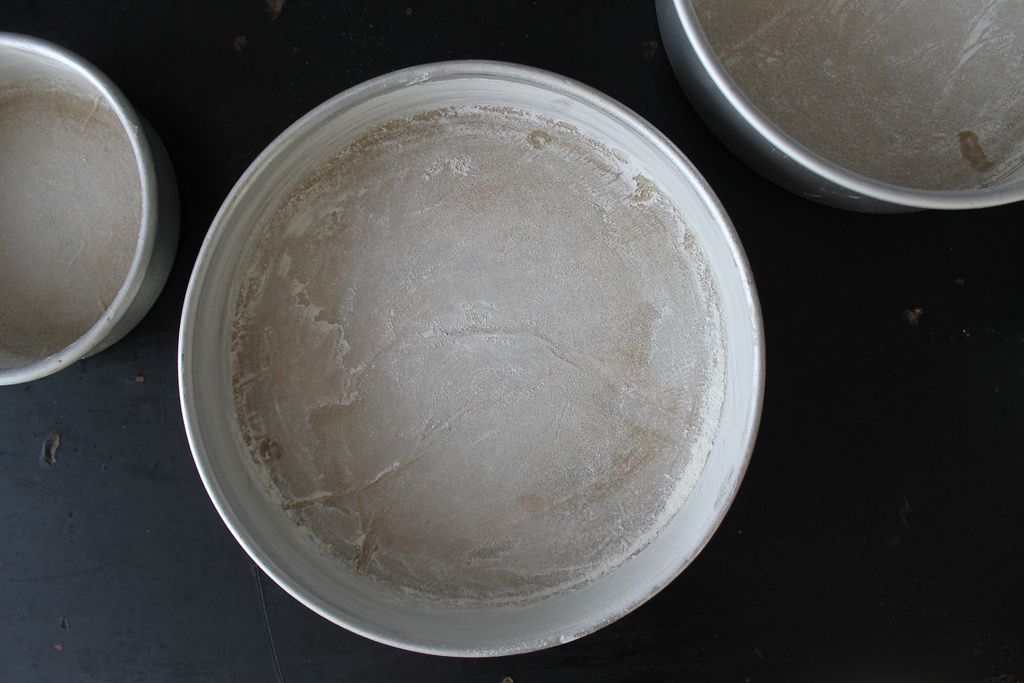 With an electric mixer or in the bowl of a stand mixer, cream together the butter and sugar until the mixture is fluffy. Add the egg whites, one at a time, mixing well after each one. Mix in the vanilla and oil.

More: Customize your cake’s color scheme by making your own sprinkles—just don’t use natural dyes!

In a medium bowl, whisk together the flour, baking powder, and salt. With your mixer running on low speed, add this to the butter mixture in three additions, alternating with the milk. Once you have a smooth batter, fold in the 2/3 cup of sprinkles. 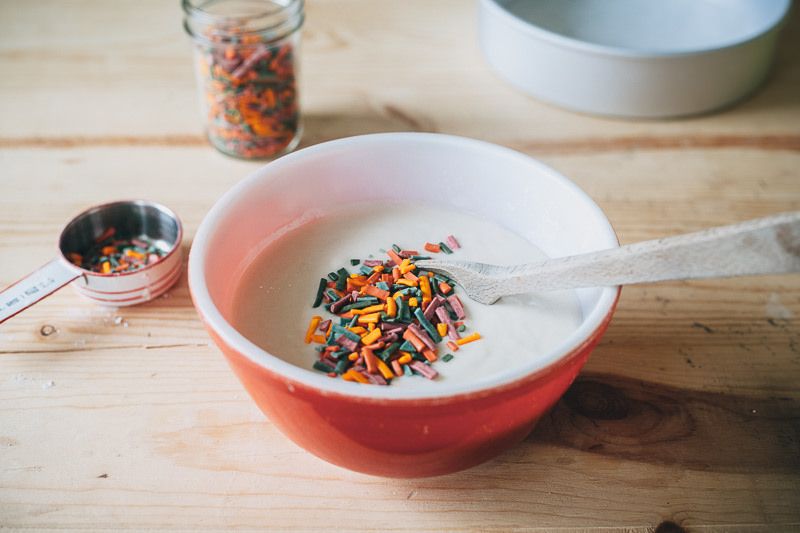 Divide the batter evenly between the pans. Sprinkle the remaining tablespoon of sprinkles over the top of the batter, then bake the cakes until a toothpick inserted into the center comes out clean. Begin checking for doneness at around 25 minutes. 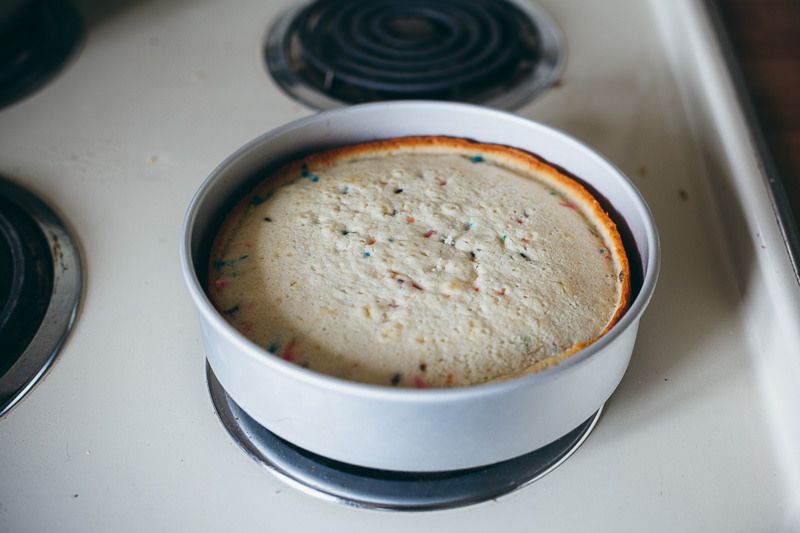 Let the cakes cool for a few minutes in the pans, then flip them onto a cooling rack and allow them to cool completely before frosting. 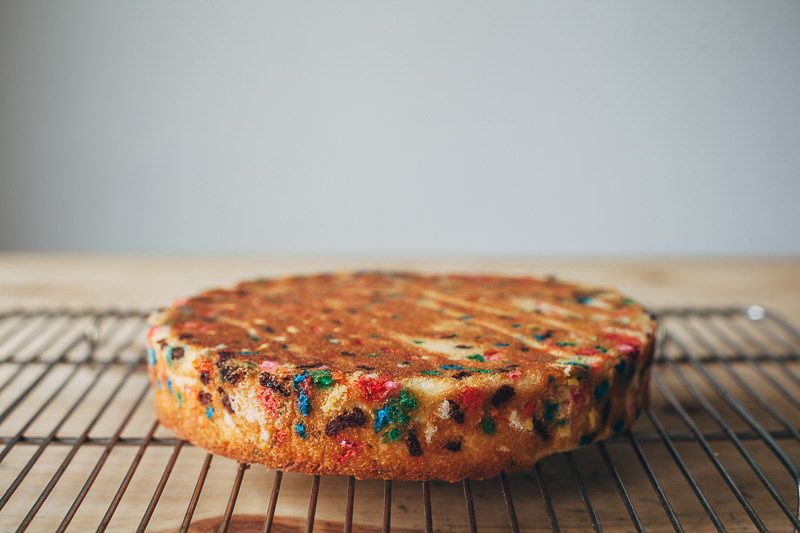 Beat together the butter and sugar until creamy. Add the vanilla and salt and mix to combine. Taste and add more sugar, if desired. Frost your cake and enjoy!

See the full recipe (and save and print it) here.

EDITOR’S NOTE: This article was originally published in 2014. But the internet’s currently abuzz with excitement about the Cheesecake Factory’s funfetti-inspired cheesecake, so it’s as good a time as any to remind you that there’s a way to create a funfetti cake on your own, from scratch, in the comforts of your kitchen. We can’t all live close to a Cheesecake Factory, after all.

Photos of pans by Catherine Lamb; all others by Molly Yeh.

Have we been treating depression the wrong way for decades?

How to keep bath towels ‘soft and fresh’ for longer –...

Have we been treating depression the wrong way for decades?