Doughnuts, for me, represent absolute perfection. Don’t get me wrong: Pie is my number one; cake is near the top of my list; and I’ve never met a cookie I didn’t like. But doughnuts…there isn’t much in this world that’s better than a good—no, a GREAT—doughnut. Sure, they can be doused in sugary glaze and topped generously with sprinkles, but the dough itself isn’t too sweet‚it’s just yeasty and light and fluffy and perfect. It’s the ideal canvas for endless variations to suit your whims.

The real reason doughnuts are so wonderful to me is the connection they have to my past. My grandmother lived in a house built by my great-great-great grandparents: a real little house on the prairie in the middle of nowhere, Kansas. When my grandma was a kid, it was her grandma’s house; same for my dad; and luckily, for me too. Along with the wonderful history of the place itself, the house was home to a lot of our own food history. One day, my grandma pulled out a pretty little yellow tin recipe box. The paint was chipped, but it was lovely and chock-full of my great-great grandma’s recipes. This includes the tattered old card that contained the handwritten recipe for these doughnuts. When a recipe is good, it stands the test of time—and these doughnuts do just that.

If you need more proof (or aren’t overly sentimental) of doughnuts’ greatness, there’s this: You’re allowed, even encouraged, to eat them for breakfast. Cake and cookies can’t really say that. So, let’s break it down, shall we? 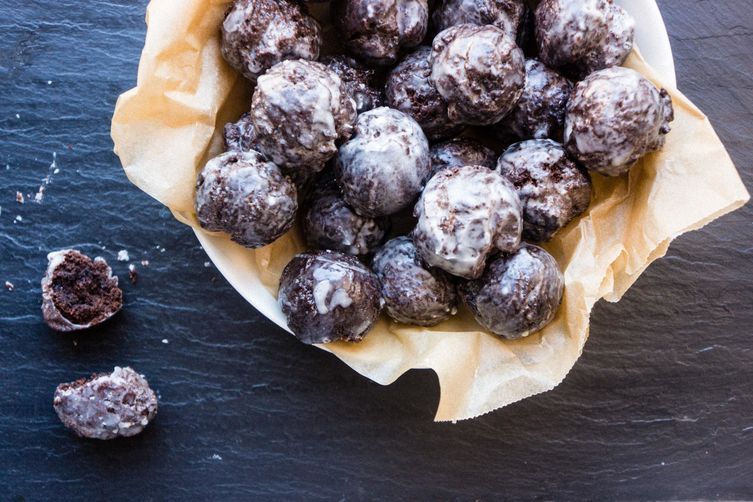 The History of Doughnuts

Time for a little doughnut history, y’all. The concept of the doughnut has origins in Dutch, Italian, French, and Russian baking—all cultures that mastered dough (especially of the sweet variety) and weren’t afraid of frying. Archeologists have even found fossilized bits of what appear to be pieces of fried dough across prehistoric Native American grounds.

But, much to our country’s pleasure, the doughnut is pretty much an American invention. The doughnut made its way to the Big Apple in the mid-1600s by way of the Dutch settlers who called them “oily cakes.” It was in the mid-19th century that the mother of a ship captain began making deep-fried dough flavored with nutmeg, cinnamon, and lemon rind. Frying trapped a lot of moisture inside the dough, making them taste relatively fresh (or at least, not horribly stale) even after days and weeks of storage. This savvy baker would stuff nuts in the center of the dough that might not fully cook in the fryer. And so she called them, quite literally, “doughnuts.”

From this time on, there was much heated debate about how doughnuts got the hole in the center. Some say it was a nod to the steering wheel of a ship, others say it was to avoid undercooking the center. Whatever the reason, doughnuts took off—cheap, fast, and easy to produce, they became a primary snack of American troops during the first World War. The hungry boys came home seeking more doughnuts, the first mechanized doughnut machine was built in 1920, and the rest, they say, is history. Doughnuts were prominent throughout the United States, and were so inexpensive to produce that they were a food of the everyman, an attainable treat even during times of poverty or hardship.

Now, the reason for this little history lesson is the name. “Doughnut” is the traditional name of these delicious treats. The word “donut” was coined when manufacturers began to try to market the food overseas—they thought a shorter word might be catchier and easier to remember for those who’d never seen it. 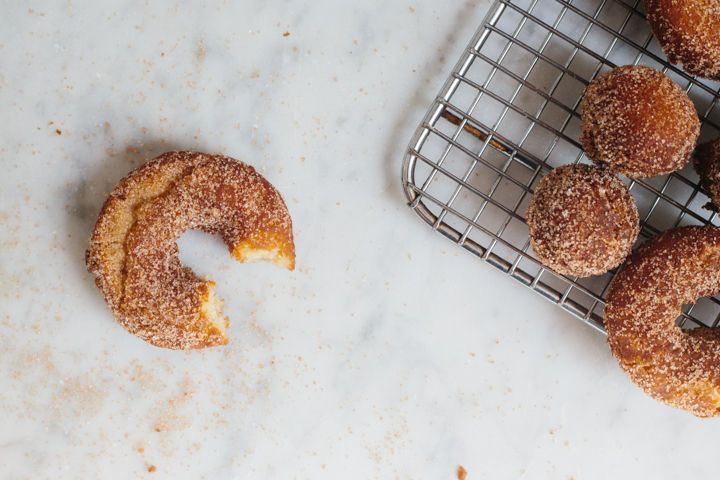 While I’m particularly fond of the classic yeasted doughnut (and that’s the recipe I’ve included here), there are many different types.

In short, there’s a heck of a lot of doughnuts out there. Nowadays, the sky’s the limit.

How to Make Yeast Doughnuts

The ingredient list for doughnuts is relatively small, but it’s important to understand the ingredients and how they are manipulated to create the end result. Flour provides structure—most recipes will veer towards all-purpose, though specialty recipes may call for cake flour or bread flour if a specific result is trying to be achieved (more tenderness and more structure, respectively). The liquid can simply be water, but it often includes some form of dairy—whether it’s milk, cream, sour cream, buttermilk, melted butter, or evaporated milk. These liquids help to tenderize the dough as well as provide richness. Yeasted doughnuts often contain very little (or even no) sugar inside the dough, while cake doughnuts often have a more significant amount. A leavener of some kind (whether yeast or chemical), and salt are also a must. Finally, any number of flavoring agents, from dried spices, citrus zest, fresh fruit, juices, cocoa, nuts, maple, etc.

Yeasted dough needs more intense mixing to build structure. Generally yeasted doughnut dough should be mixed on low speed until the dough comes together, then mixed on medium speed to strengthen gluten strands. The dough is not mixed as intensely as brioche—the whole process will take only a few minutes—but much like brioche dough, yeasted doughnut doughs can be quite sticky and can require oiled hands or a sprinkling of flour before handling. Cake doughnut batter, on the other hand, should be mixed minimally to ensure tenderness. 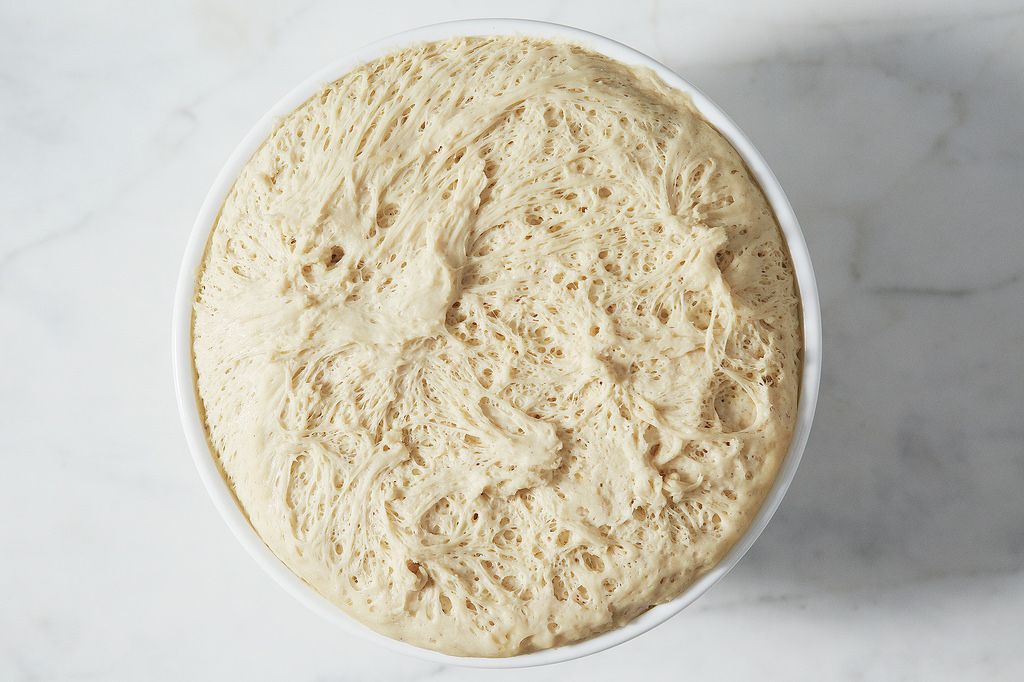 This tidbit doesn’t apply to cake doughnut batters, but when yeast is involved, it’s really important to allow for enough rise time. Generally, this means 1 to 2 hours of bulk fermentation (letting the entire dough rise) and about 30 minutes after shaping. This gets to be a problem for impatient doughnut lovers (isn’t that all of us?). There is a solution. Instead of using warm water to mix the dough, use room temperature water and refrigerate the dough immediately after mixing. Under refrigeration, the dough continues to rise, just much more slowly. This means you can mix the dough up to 12 hours ahead, let it rise slowly overnight, and wake up ready to fry in the morning. 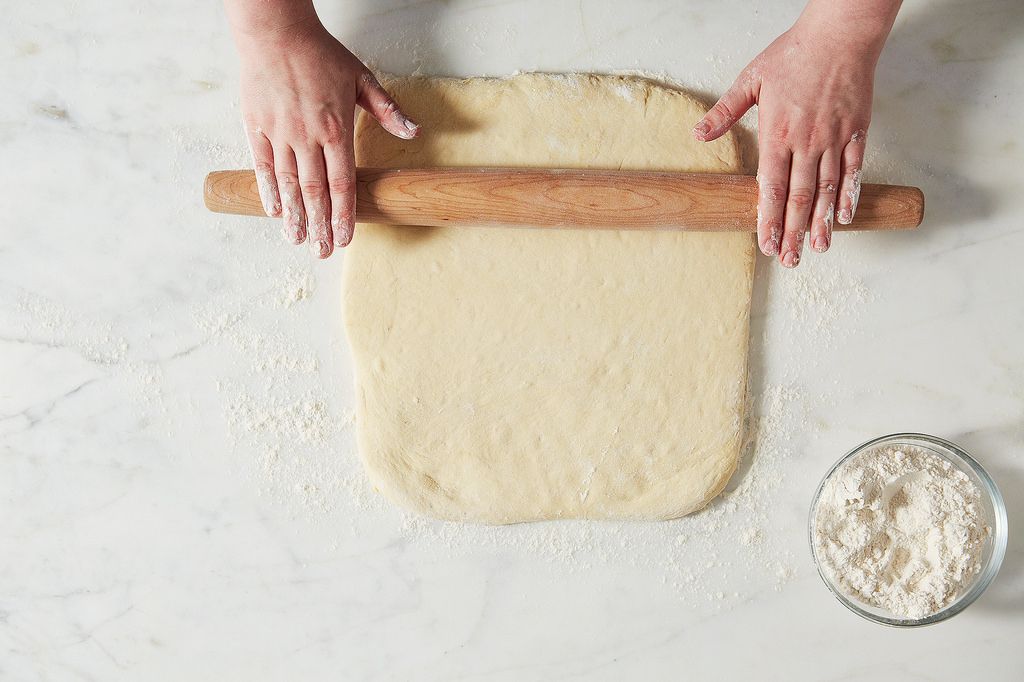 Doughnuts are rustic but it’s still important to keep shaping in mind because this is where they can go a bit awry. A doughnut cutter is great, but you can improvise if you don’t have one: For a long time, I used a circle cookie cutter and then the base of a large pastry tip. It’s important to make sure the hole itself is large enough—if it’s too small, it will “fill in” when the dough hits the fryer. I also like to cut square doughnuts (no scraps!), using just a pastry wheel—2 inches x 2 inches is a good base size (this same technique works for Long Johns).

When you transfer the dough to the oil, do so carefully: It’s easy to accidentally squish the hole shut or stretch the doughnut into an oblong shape. If the doughnut batter is to be piped, it can be piped directly into the hot oil. Since that can be pretty scary, piping onto squares of parchment can alleviate the fear. When you go to fry, the doughnut will release itself from the parchment, and you just have to remove the parchment from the oil with tongs. 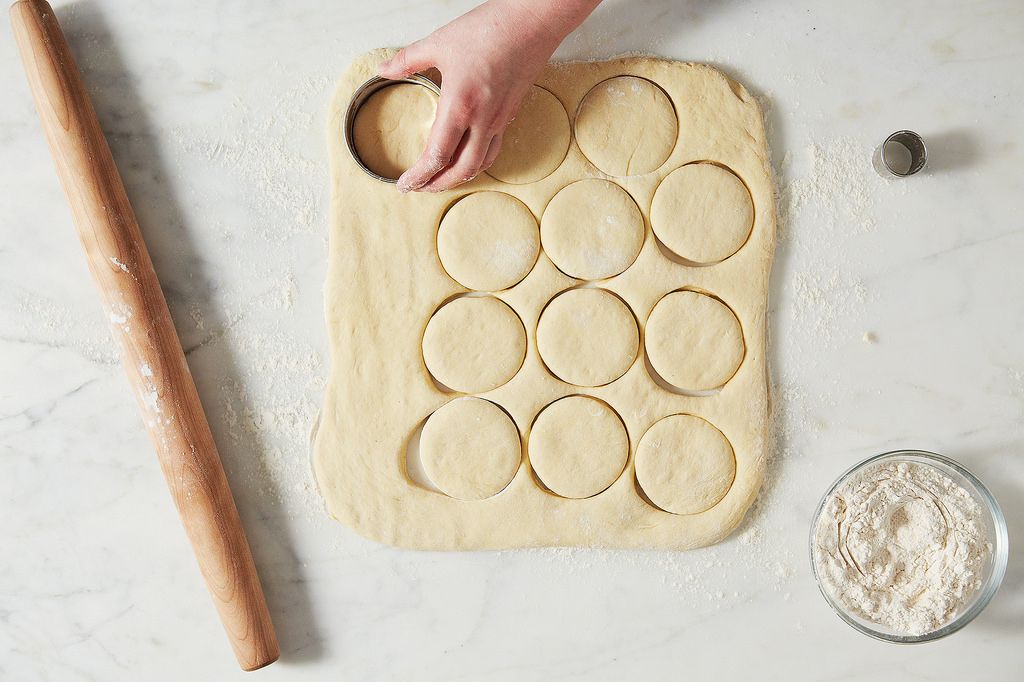 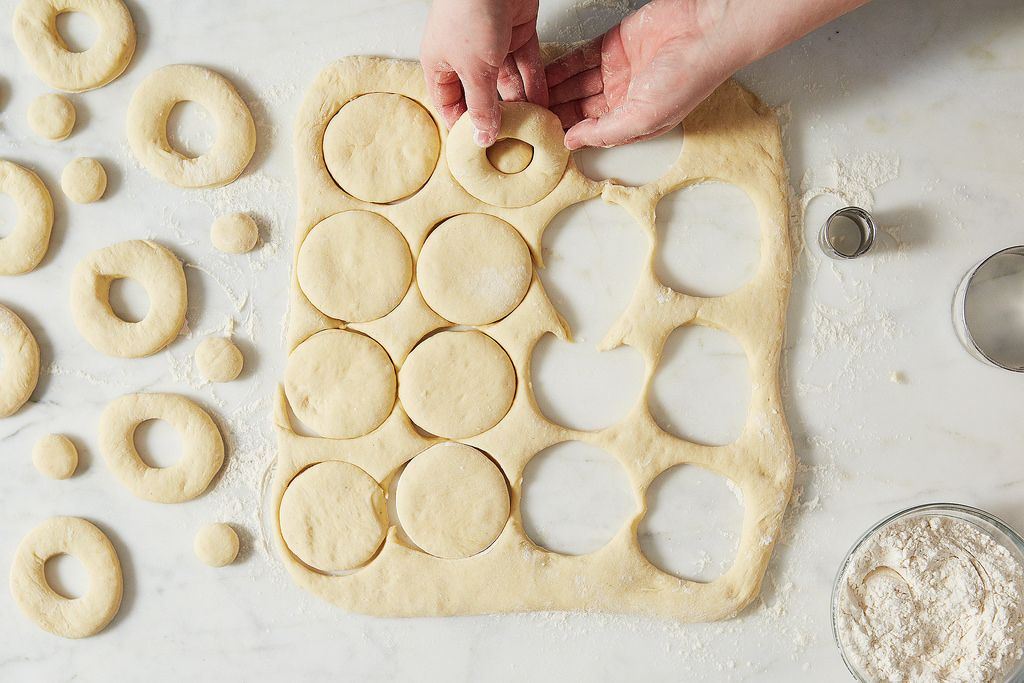 Baked doughnuts are now officially a thing, but let’s be honest: Ain’t nothin’ like the real thing, baby. If you have one, use a deep-fry thermometer to test the oil and help regulate the temperature —around 350°F is best. If you don’t have one, do it the way my great-great grandma did: Throw a doughnut hole in and see if it sizzles and rises to the surface. If it does, you’re good to go.

Remember that if the oil is too hot, the doughnuts will brown too quickly and the center may remain raw. If the oil is too cold, the dough will absorb a large quantity of oil and be greasy upon cooling. The perfect doughnut will be evenly golden brown on both sides and pale in the center.

My favorite draining system for doughnuts is simple: several layers of absorbent paper towels on a baking sheet. When it gets too saturated, toss the top layers and reveal the fresh ones underneath. Some folks opt for a cooling rack set on top paper towels. Either way is fine, just make sure to use a spider or slotted spoon to remove the doughnuts to start the draining process off right. 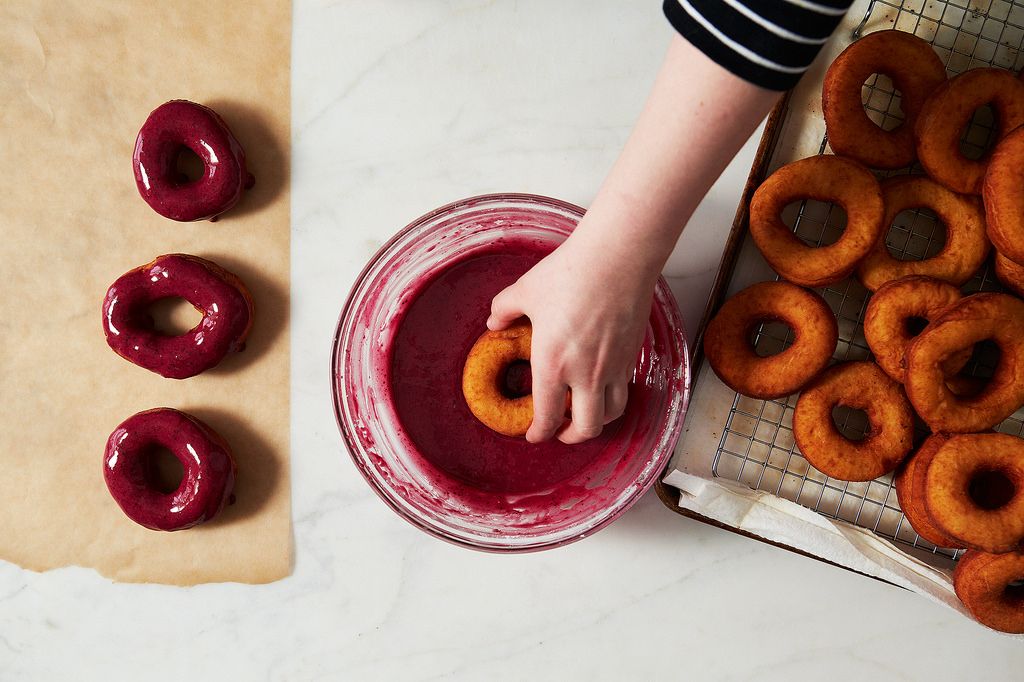 This is where it gets fun: the finishing.

For a thin, all over glaze (think classic glazed doughnuts), let the doughnuts cool for 3 to 4 minutes, then transfer to a wire rack. Pour the glaze evenly over, fully coating the doughnuts. Let set. 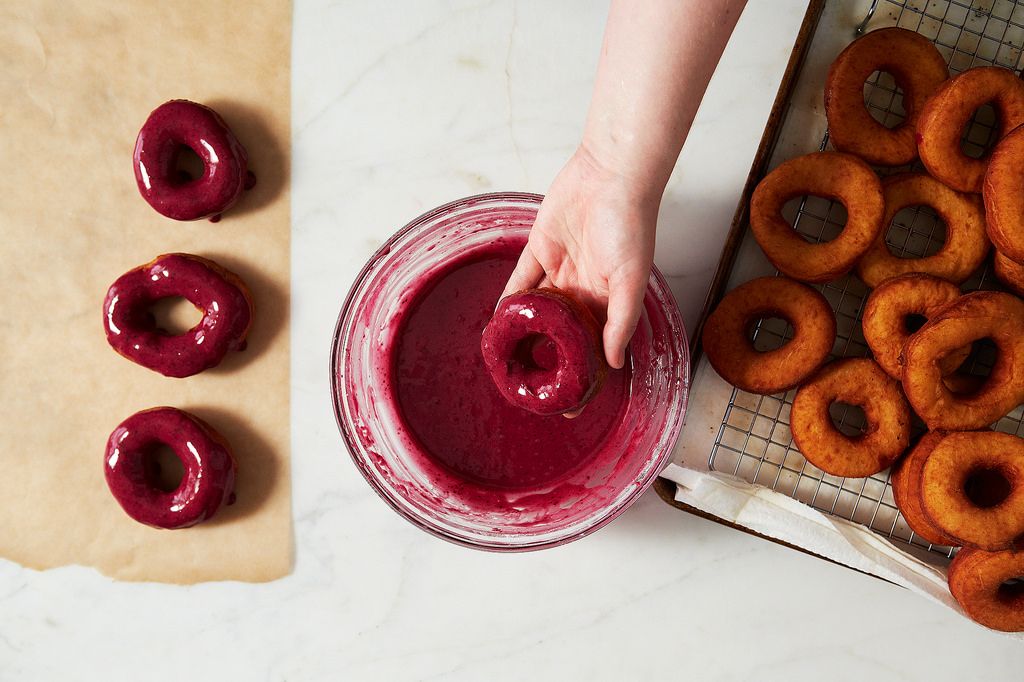 Basic Yeast Doughnuts (with Many Variations)

The best doughnuts are fresh doughnuts. If you’ve ever lived anywhere near a Krispy Kreme, you understand. When that magical light went on, it was absolutely worth it to pull over with a total screech to get at those piping hot doughnuts. But even at room temperature, doughnuts are best the same day. If you must, keep them in airtight containers overnight, and enjoy round two. 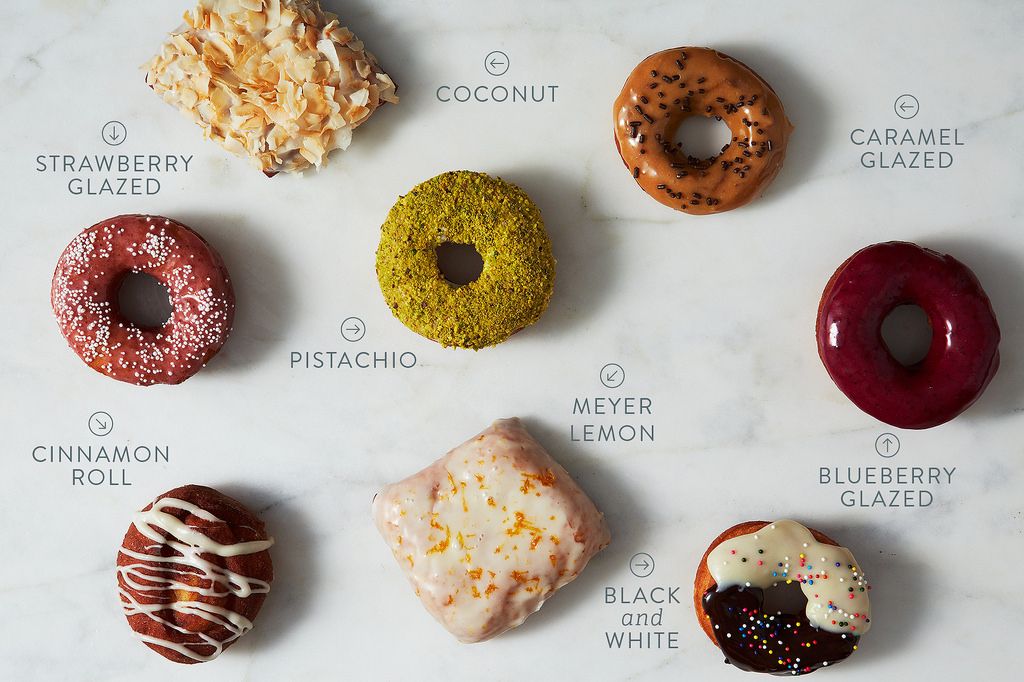 Photo of apple cider doughnuts by Yossy Arefi; photo of chocolate doughnut holes by Samantha Seneviratne; all other photos by Alpha Smoot

These chocolate doughnut holes bring to mind classroom birthday parties and Saturday coffee runs with my parents. They’re nostalgic in all the right ways, but so much more delicious when you make them yourself. If you have a soft spot for cake doughnuts, this is the recipe for you. Faintly reminiscent of German chocolate cake, these doughnuts strike a subtle flavor balance by using coconut milk and coconut oil rather than the shredded stuff. Sufganiyot are traditionally made and eaten during Hanukkah, but Joan Nathan’s recipe is so simple and delectable you’ll want to eat them year-round. Use your favorite jelly for the filling to make them all your own. Recipe developer Michael Solomonov claims these are easier to make than sufganiyot, and notes the bulk of their flavor comes from the glaze and toppings, so run wild! Lean into their Middle Eastern heritage with flavors like rosewater and orange blossom. Another stamp for your doughnut passport! These doughnuts hail from South Africa and feature a heavily spiced dough, a spice syrup, and dessicated coconut coating. The secret to this pillowy soft, bouncy dough? Mashed potato. Brilliant! These cardamom-laced doughnuts are shockingly baked, not fried, but you would never know considering their soft, fluffy texture. There are few things better in life than a fresh cider doughnuts at a picturesque apple orchard in the fall. Sadly, that fantasy is only accessible for a very brief window in time and space, but luckily, you can have piping hot cider doughnuts any time of year. This recipe yields doughnuts that are, dare I say, better than the ones from the orchard. Which doughnut recipe will you make first? Sound off in the comments!

How to Pit an Avocado Without a Knife

You’ve had your 2nd dose. What’s safe to do now?

Saving warning: ‘Record low’ may be ‘yet to come’ – Britons change money habits...