Aloy’s resilience, passion, and curiosity made players fall in love with her in Horizon Zero Dawn. For the sequel, she’s not the same underdog we watched come into her own. She’s proven herself, becoming a hero in the eyes of the populace around her. Of course, once you succeed and earn the title of “greatest machine hunter in the land,” the pressure’s on to live up to people’s expectations, and Aloy isn’t going to have it easy this time around.

When it rains, it pours. Six months after the events of Horizon Zero Dawn, Aloy heads westward to find out more about a mysterious Red Blight, which signals the degradation of the biosphere. If the stakes weren’t already high enough, her journey to new soil also brings new threats. This time peril comes not just in the form of harrowing machines, but also a dangerous rival tribe that can likewise override mechanical beasts. Throw in a mysterious incoming storm, and Aloy has her work cut out for her.

Guerrilla Games saw Aloy’s newfound fame as an intriguing narrative thread to explore in Forbidden West. During our demos, we often saw Aloy reminded of her legacy and showered with praise. She’s no longer an outcast that’s scoffed at; she’s treated as a savior and put on a pedestal, but has the biggest task of all on her plate: ensuring Earth has a future.

“It’s a lot of pressure, and that pressure just gets more and more intense as the game goes on,” says narrative director Benjamin McCaw. “It actually winds up being a big part of her arc as a character … this idea of carrying the world on her shoulders.” 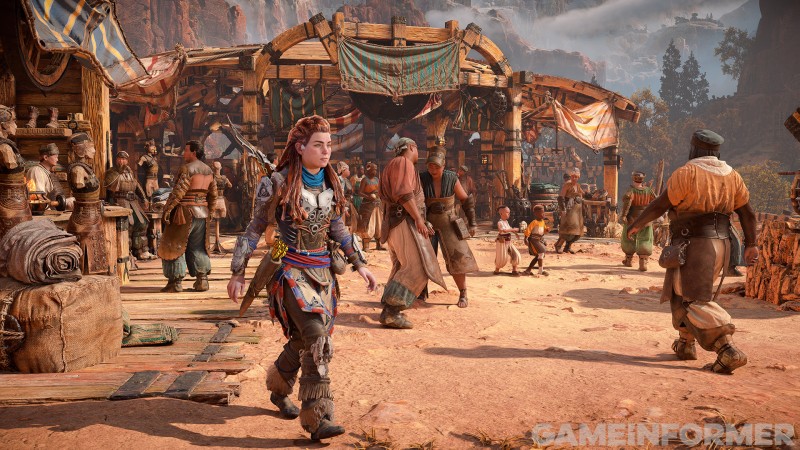 Aloy has always been self-reliant because she’s had to be. After all, being shunned by your own tribe doesn’t make you eager to depend on others for support. But with so much more on her shoulders, it might be time for Aloy to let more people in and accept help where she can find it. This conflict of “leaning on others” versus “trying to do everything herself” will continue to surface in Forbidden West.

“On one level, Aloy really wants to live up to the example of Elisabet Sobeck, her mother figure, and do whatever it takes to stop the blight and save the world, even if that means doing it single-handedly,” McCaw says. “But she’ll also discover that it’s lonely being a savior. And ultimately, it’s the connections with others that make the world worth saving in the first place.”

Aloy has always had an aloofness to her, but seeing Guerrilla explore more of the loneliness that comes with success has us intrigued. McCaw hinted more about this recently on PlayStation Blog: “Although she has made many friends during her adventures, she still feels like an outsider, and the truth is, she has no real home. These aspects of her character will be explored in depth as she ventures into the mysterious frontier of the Forbidden West.”

It’s probably no coincidence Guerrilla keeps reiterating that this entry focuses much more on giving you more time with Aloy’s companions, hoping players form stronger connections with them than in Zero Dawn. We’re anticipating this not only gives more weight to Aloy’s relationships, but also brings out new facets to her personality. New experiences often bring change, and we can’t wait to see how this journey challenges Aloy to grow as a person.

Where would you like to see the character of Aloy go in Horizon Forbidden West?

Still want more on Horizon Forbidden West? Check out our online cover hub below, which details the new machines and improvements coming to the game.