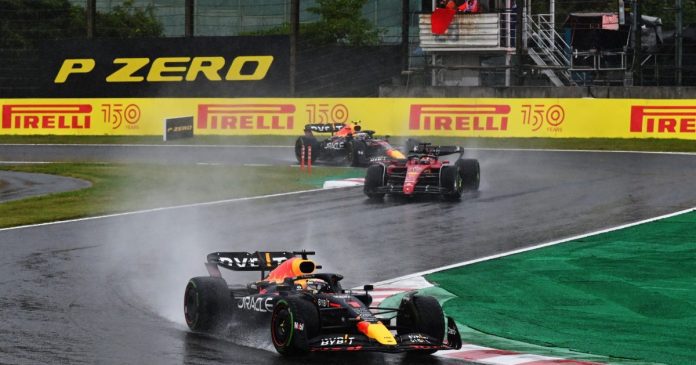 Formula 1 are aiming to modify the regulations on shortened races, following the confusing conclusion to the Max Verstappen’s title challenge.

When Verstappen crossed the line at Suzuka in the rain-shortened race, it was assumed that he was not the 2022 Formula 1 World Champion.

Even after Charles Leclerc copped a five-second time penalty by cutting the final chicane on that last lap and gaining an advantage that would drop him to third and promote Sergio Perez, it was still not enough.

As the race had not reached 75% of its scheduled distance needed for full points to kick in following the two-hour rain delay, the expectation was that the sliding scale of reduced points would be referred to – this having been refined in the aftermath of the abandoned 2021 Belgian Grand Prix.

It was believed that Verstappen would be left one point short of the total he required to seal the title and that the coronation would roll on to the United States two weeks later.

However, a quirk in the sporting regulations meant that because the race hit the three-hour hard stop window Grands Prix must be completed within, full points were dished out.

F1 and the FIA are now taking steps to ensure that this scenario cannot happen again.

What was the quirk?

During the off-season, the rules were re-written ahead of 2022, with a new set of points to be awarded in shortened races, provided intervals of 25%, 50% and 75% of the planned race distance were reached.

This is covered in Article 6.5 of the sporting regulations.

However, this sliding scale would only be applied if a race was “suspended in accordance with Article 57 and cannot be resumed” – this being the article that covers the suspension of a race and it not being able to be restarted.

Following the red flag in Japan, the race was restarted and ran to the time-enforced chequered flag. By definition, this meant full points were awarded.

According to RacingNews365.com’s sources on the F1 Commission, the line “a race is suspended in accordance with Article 57 and cannot be resumed” is set to be removed from the regulations.

This means that the three columns of points can be awarded as intended in 2023 onwards in similar situations.

It is intended that six points shall be awarded to the winner if they complete more than two green flag laps, but less than 25% of race distance, rising to 13 for 50% and 19 for 75%.

If no green flag racing can take place, or less than two laps are completed, the podium ceremony and TV interviews are set to be cancelled.

While there is a two-hour time limit for Grands Prix, this can take place within a three-hour window from when the start signal is transmitted by the FIA.

In so-called timed races, drivers usually take the chequered flag one lap after the one they were on when the two hours expired.

It is believed by RacingNews365.com’s sources that it is hoped that this three-hour window can be extended to four in an attempt to try and extend the possibility of getting more racing in.

For races such as Australia and Japan which usually run close to dusk and do not feature additional lighting infrastructure, additional limits could be introduced depending on local sunset time.

At races such as Singapore and Abu Dhabi which either run fully at night or transition into it from dusk, this will not be a problem.

All changes remain subject to official confirmation by the World Motor Sport Council.