Former Toronto FC coach Greg Vanney is back in Los Angeles, where it all started.

While Vanney’s Dec. 1 exit as TFC boss was unexpected, his landing in L.A. as the new Galaxy head coach does not come as a surprise. The 46-year-old made his name as a player with the Galaxy after finishing at UCLA.

Vanney, who won everything but the CONCACAF Champions League title with Toronto, said he needed a new challenge after more than six successful years at TFC. He will get one in Los Angeles, which fired Guillermo Barros Schelotto on Oct. 29 with three games remaining in the regular season.

Toronto continues its search for a replacement for Vanney with Patrick Vieira, Chris Armas, Ben Olsen and Steve Cherundolo among those reported to have drawn interest.

Vanney, taken 17th overall by the Galaxy in the 1996 Major League Soccer draft, spent six seasons in Los Angeles before heading to France to join SC Bastia. Returning to MLS, the former U.S. international defender finished out his playing career with the Galaxy in 2008 after stints with FC Dallas, the Colorado Rapids and D.C. United. 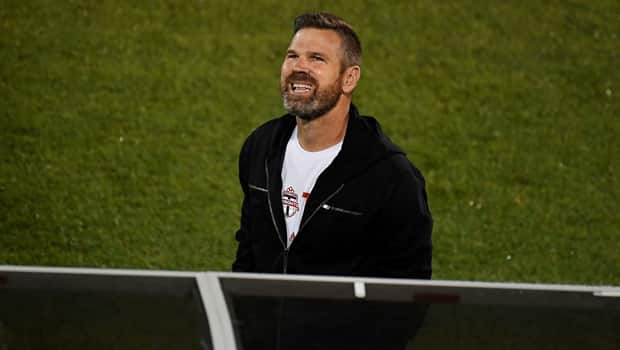 Greg Vanney breaks down while thanking his players during his media availability after stepping down as Toronto FC’s head coach. 3:12

“Greg is focused on building a culture that will serve as the foundation of this club,” Galaxy president Chris Klein said in a statement. “He is detail-oriented, a fierce competitor and has a deep understanding of our league and what it takes to succeed on and off the field. He will be an outstanding ambassador for the L.A. Galaxy, our supporters and Los Angeles.”

“Greg is a part of the history of the L.A. Galaxy and we are confident that he is the right person to lead our team moving forward. His accolades as Toronto FC’s manager are evidence of his ability to create and sustain success in our league. We look forward to working with Greg to continue to build a team that will compete for trophies.”

The Galaxy finished 10th in the 12-team Western Conference last season despite the presence of Pavon and Chicharito, who scored just two goals in 12 appearances during an underwhelming debut season as MLS’ highest-paid player.

Winning a title with the Galaxy represents unfinished business for Vanney.

“I am extremely excited about the opportunity to coach the L.A. Galaxy,” said Vanney. “The L.A. Galaxy are an iconic club with a rich history in Los Angeles, MLS and North American soccer over the last 25 years. I am committed to working tirelessly for this club, our fans and Los Angeles to win a championship.

“I look forward to this new challenge in my career and am eager to get started.”

Vanney made 193 of his 270 career MLS appearances in Galaxy colours, ranking him seventh on the club list in player appearances. While with the Galaxy, Vanney was named to the MLS Best XI twice (2000, 2001). Twenty-six of his 32 playoff appearances were with L.A.

The Galaxy said Vanney’s coaching staff will be announced at a later date. It’s likely they will include some familiar faces for Toronto fans.

From doormat to title contender

Vanney played at UCLA with Nick Theslof, another TFC assistant coach. The two also worked together at Chivas USA where Vanney was an assistant coach and technical director of the youth academy prior to joining Toronto in 2013 as academy director and assistant GM.

L.A. has been going the other way.

While the Galaxy leads all MLS clubs with five league titles, its last MLS Cup triumph came in 2014 and it has missed the playoffs in three of the last four years.

Barros Schelotto was hired in January 2019 after winning two championships in Argentina with Boca Juniors. His record at the Galaxy helm was 21-26-6.

Dominic Kinnear, a former successful head coach in San Jose and Houston, finished out the season as interim Galaxy coach.

SEISS questions: Can you still claim self-employed grant if you have...

Money saving tips: How Britons can save money in 2021 and...

Tax planning: The ‘worthwhile’ action to consider ahead of Rishi Sunak’s...