Dying Light 2 Stay Human is slated to be a step up from the first game, which we deemed a fantastic open-world, zombie-slaying experience back in 2015. The second game in the franchise got a bevy of gameplay trailers at Gamescom and a constant rollout of updates over the years. Sadly, delays are a natural part of this industry that can be necessary for various reasons. Sure, it’s deflating for the player, but often dev teams feel the full brunt of it. Today, Techland announced that Dying Light 2 has been delayed to early 2022. CEO Pawel Marchewka provided some context for the major decision in an emailed statement.

“The team is steadily progressing with the production, and the game is nearing the finish line,” Marchewka states. “The game is complete, and we are currently playtesting it. It is by far the biggest and most ambitious project we’ve ever done. Unfortunately, we’ve realized for us to bring the game to the level we envision, we need more time to polish and optimize it…We are sorry to keep you all waiting a little longer, but we want the game to meet your highest expectations on release, and we don’t want to compromise on this.” You can read the whole statement here: 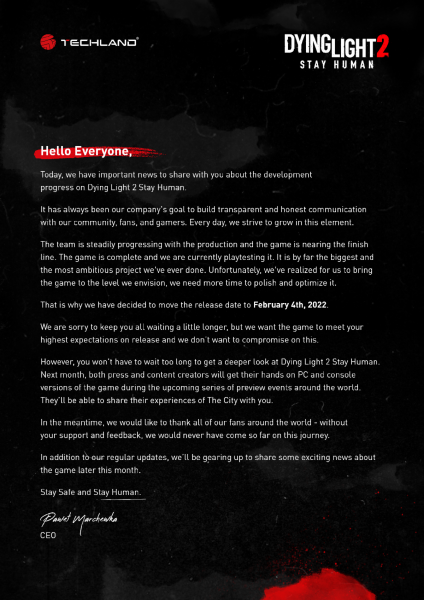 Marchewka continued, mentioning that next month (October), press and content creators will be given access to PC and console versions of the game as Dying Light 2 preview events become more commonplace leading up to the end of the year. He also expressed gratitude for the support and immense fandom, “In the meantime, we would like to thank all of our fans around the world – without your support and feedback, we would never have come so far on this journey.”

Are you bummed out about the Dying Light 2 delay, or is the sheer technical immensity of the game making you even more excited? You know the deal – drop your thoughts down below!

Who is TOWIE star Clelia Theodorou? Everything you need to know...

Meaning behind Amber Heard’s daughter’s name as she welcomes baby via...