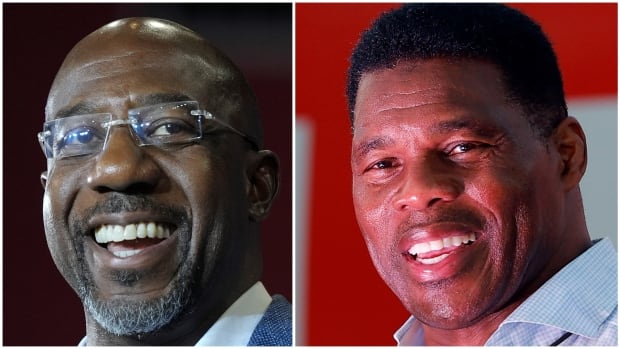 For the second straight U.S. election cycle, a Georgia vote on Tuesday will go a long way to determine how the Senate functions for the next two years.

The Georgia run-off determines the final Senate contest in the country, with incumbent Democratic Sen. Raphael Warnock battling Republican Herschel Walker, the former NFL star. In the Nov. 8 midterm vote, Warnock led Walker by about 37,000 votes out of almost four million cast but fell shy of a 50 per cent majority with other candidates in the race, triggering a second round of voting that will depend heavily on turnout.

While the Democrats ensured they retained control of the Senate last month with close midterm wins in Nevada and Arizona, they are looking to go one step beyond the 50-50 split in the chamber seen in the session just about to expire. This session has seen Vice-President Kamala Harris cast 26 tiebreaking votes for Democrats, which according to U.S. election resource site Ballotpedia is a new record.

A 51-49 margin would see Harris not have to be on call for such votes and be freed up for travel on Biden administration priorities, but is even more important to the Democratic Party as a whole.

While it’s debatable how much legislation the Biden administration can pass with the Republicans regaining control of the House, as Alex Panetta of CBC News has pointed out, they will at least want to smooth the Senate-only process of confirming Democratic judges across the federal court system.

They’ll also want to more easily determine the agendas of the various Senate committees on oversight and priorities. While Democrats chair all committees currently, the 50-50 split both now and in 2001 has involved power sharing on resources and budgets and an even split on the committees. Those negotiations would not be necessary with a 51-49 Democratic edge, with the committees comprising an odd number of members to break any vote ties.

The current session has also seen Democratic senators such as Joe Manchin of West Virginia and Arizona’s Kyrsten Sinema wield considerable influence when they have pushed back on some bills proposed by the White House and the larger Congress. An extra vote in pocket could conceivably reduce the leverage of a single senator to hold up legislation.

‘Life happens in the Congress’

Perhaps the biggest reason every Senate vote counts is matter-of-fact, or morbid, depending on your view.

“Life happens in the Congress,” Democratic House member Eric Swalwell told MSNBC in an interview broadcast on Monday, pointing out that six House representatives have died since being sworn in for the 117th session in January 2021. Four were Republicans, with the latest death Democrat Donald McEachin of Virginia on Nov. 28, just three weeks after he won re-election in the midterms.

While the House is over four times as large as the Senate, it is also younger. The average age of a U.S. senator in 2021, according to the Washington Post, was 64.3, the oldest on record.

While a handful of senators above that age opted to retire instead of running in November, age is not a guarantee against a sudden change in health. New Mexico Democrat Sen. Ben Ray Lujan, 49 at the time, suffered a minor stroke early this year that saw him miss a number of votes, while incoming 53-year-old senator-elect John Fetterman, a Democrat, suffered a stroke in the spring that he has admitted is affecting his auditory processing.

To put it bluntly, a Walker victory and a Democratic death over the next two years would temporarily lead to a 50-49 Republican advantage. The governor of the state where the deceased is from, not guaranteed to be a Democrat, would appoint someone to fill the vacancy. Depending on the timing and state in question, a special election would be held or a vote would not occur until the 2024 presidential and congressional elections.

Many current Democrats remember when they lost a precious supermajority in 2010 when Republican Scott Brown scored an upset in a special election following the death of Ted Kennedy.

Warnock, senior pastor of Atlanta’s Ebenezer Baptist Church, has been down the run-off road before. He and fellow Georgian Jon Ossoff gave Democrats control of the Senate with wins in early 2021.

For Republicans, Walker’s candidacy is their last chance to flip a Senate seat this year after failing to do so in New Hampshire and Nevada. Walker has the endorsement of former president Donald Trump, their relationship extending back to the early 1980s when he was a running back for Trump’s New Jersey Generals in the United States Football League.

But his campaign was dogged by intense scrutiny of his past, including revelations of children born out of wedlock and claims that he paid for two former girlfriends’ abortions — accusations that Walker has denied. The former University of Georgia star player has also been mocked by former president Barack Obama, among others, for meandering campaign speeches, exaggerations about his post-football business accomplishments and a shaky grasp of public policy.

In the November election, Black voters in Georgia overwhelmingly voted for Warnock, with Walker enjoying a significant advantage among white voters.

About 1.9 million votes already have been cast by mail and during early voting, an advantage for Democrats whose voters more commonly cast ballots this way. Republicans typically fare better on voting done on election day, with the margins determining the winner.

Warnock’s campaign has spent about $170 million US on the campaign, far outpacing Walker’s nearly $60 million, according to their latest federal disclosures.

Given the closeness of the previous note and the volume of mail-in ballots, it is not clear if a result will be known by Tuesday night.

TikTok CEO to testify before House panel in March