British Columbia is preparing to offer COVID-19 vaccines to more than 300,000 people in priority groups next month, including teachers, grocery store workers and first responders.

Premier John Horgan said doses of the AstraZeneca-Oxford vaccine will be available to people in priority groups in April.

“We know this has been an extremely challenging time for frontline workers,” he said. “They are the true heroes we want to immunize at this time.”

The province also plans to expand its vaccination program to residents between the ages of 75 and 79 in the days ahead, Horgan told an afternoon news conference.

The premier said people who get the AstraZeneca-Oxford vaccine are safer and better off than if they didn’t get it. 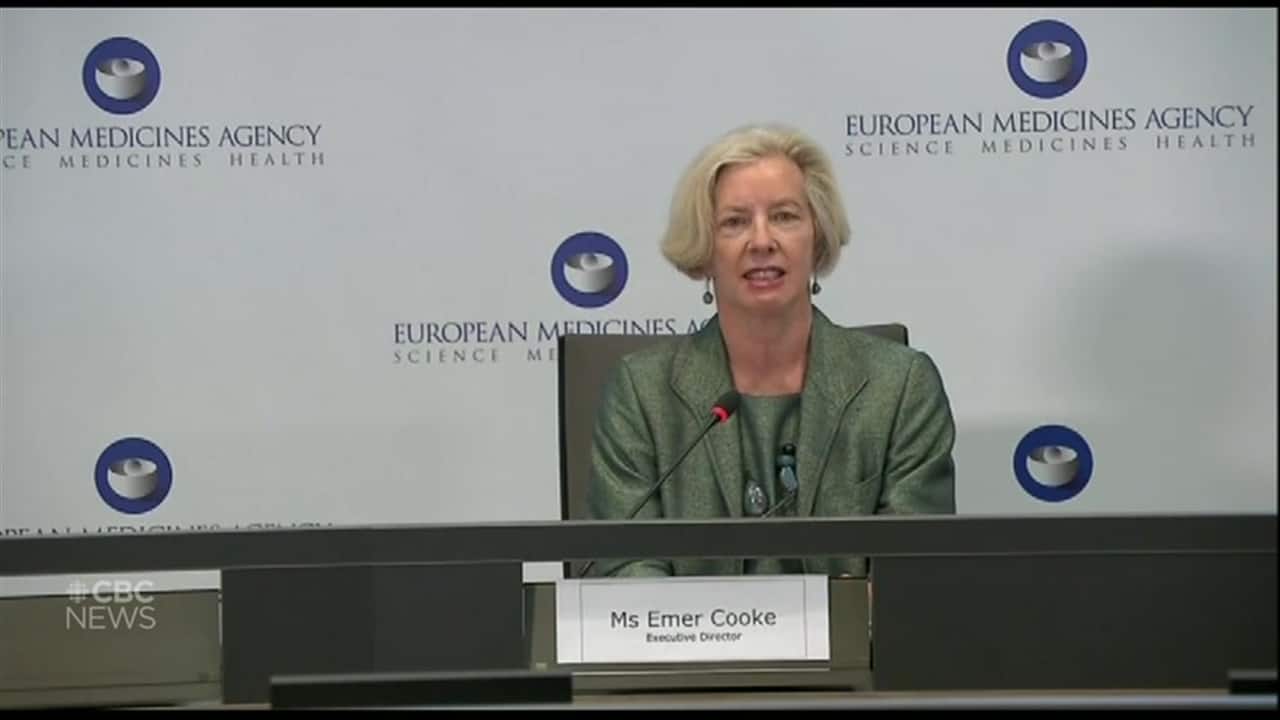 The AstraZeneca COVID-19 vaccine is safe and does not appear to cause blood clots, says the European Medicines Agency, after a review by an expert committee. But the EMA couldn’t rule out a link to blood clots entirely. 1:22

The European Medicines Agency echoed that view and said earlier on Thursday that the benefits of the AstraZeneca-Oxford vaccine still outweigh any risks, even though it hasn’t been able to fully rule out a link between the vaccine and two specific types of rare blood clots that developed in a small number of patients who got the vaccine. 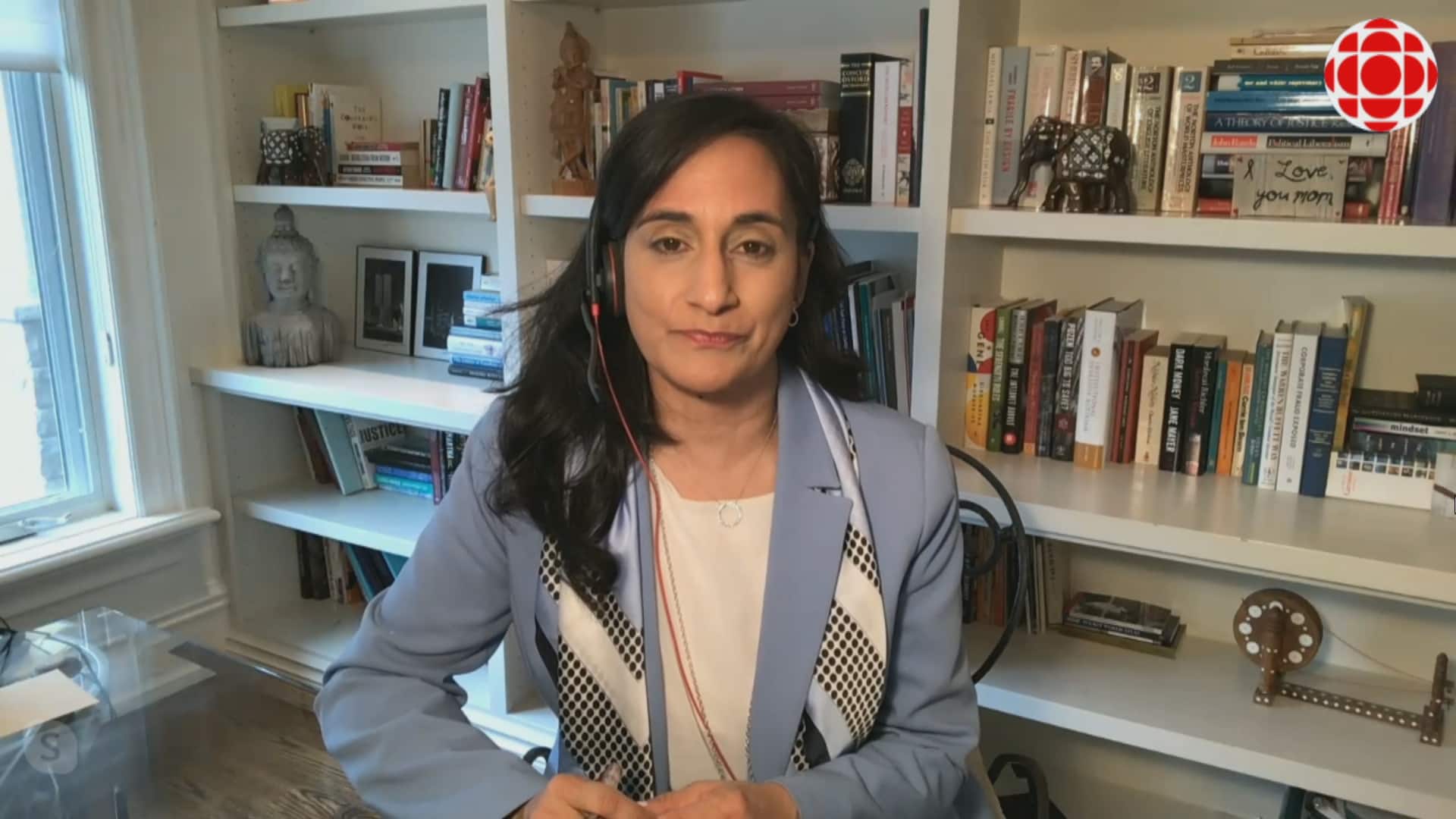 Procurement Minister Anita Anand tells Power & Politics she’s still finalizing a deal with the White House that could see 1.5 million AstraZeneca doses arrive in Canada by the end of March. 4:21

Dr. Bonnie Henry, B.C.’s medical officer of health, welcomed that news. B.C. is already expecting more than 340,000 doses of the AstraZeneca-Oxford vaccine to arrive by late May. The province has already received 68,000 doses.

WATCH | Inside the race to get COVID-19 vaccines to Canadians: 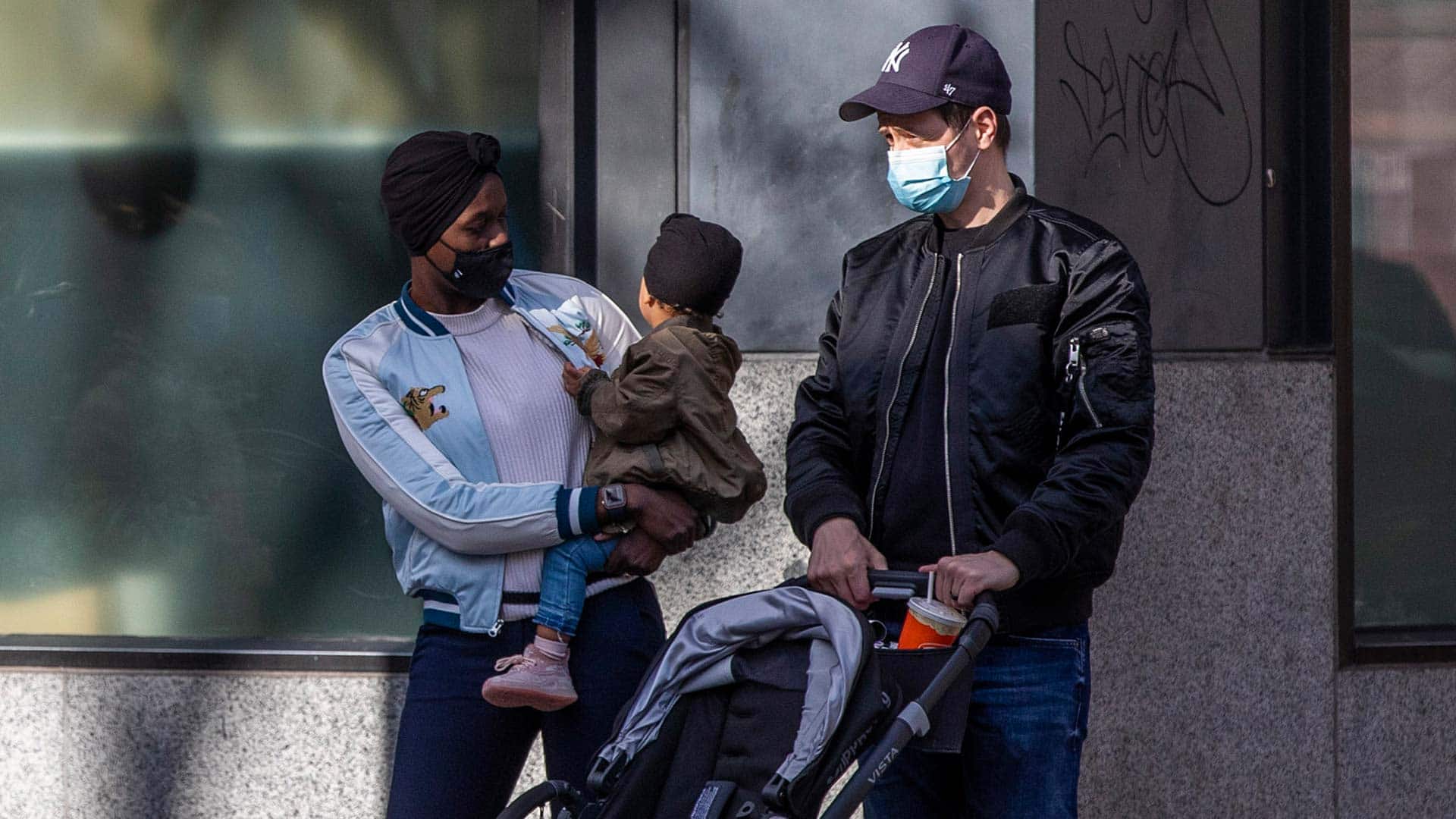 The COVID-19 variants are taking hold in much of Western Canada with confirmed cases doubling in some provinces and Regina seeing nearly all its cases from the variants, prompting health officials to urge caution and warn that lockdowns may return. 1:32

Alberta is expanding its vaccination campaign on Friday to residents born between 1947 and 1956, as well as Indigenous residents born in or before 1971, Dr. Deena Hinshaw told a news conference Thursday afternoon. The province’s chief medical officer of health also announced 505 new cases of COVID-19 and one new death.

Ontario on Thursday reported 1,553 new cases of COVID-19 and 15 additional deaths. According to the province, there were 730 COVID-19 patients in hospital, including 304 in intensive care.

The premier said public response to the vaccine rollout has been “absolutely enormous.” Ford said over 400,000 people have booked vaccine appointments so far and once again pressed the federal government to deliver more vaccines to the province.

The top doctors in Ontario’s two main COVID-19 hot spots, meanwhile, have been preparing for warmer weather. Dr. Eileen de Villa and Dr. Lawrence Loh have said they’re seeking to ease some of the restrictions on outdoor activities in Toronto and Peel.

Both medical officers want to keep their communities in the strictest “grey-lockdown” category of Ontario’s colour-coded pandemic framework, but with adjustments that would allow for outdoor dining and fitness.

Meanwhile, Ottawa announced it is moving into the red zone on Friday, a move that brings with it some of the strictest restrictions detailed on the province’s pandemic scale. The news followed the city’s medical officer of health telling a news conference that key COVID-19 indicators appeared to be getting worse earlier in the week.

In Atlantic Canada, premiers announced the so-called Atlantic bubble that allows for freer movement between provinces in the region will be reintroduced as of April 19.

“While COVID-19 remains a serious concern, premiers are encouraged by Atlantic Canadians’ adherence to public health measures, the containment of regional outbreaks, and the progress in rolling out vaccine,” said a statement from the Council of Atlantic Premiers.

The statement said the reopening will happen only if case numbers stay low, outbreaks are contained and with the ongoing advice of chief medical officers in the participating provinces.

The update comes after Nova Scotia reported three new cases of COVID-19 on Thursday. Health officials also reported one new death, the first in the province since summer and the 66th death since the pandemic begin.

In Quebec, health officials reported 702 new cases and seven additional deaths on Thursday, bringing the total number of cases reported in the province since the pandemic began to more than 300,000. Hospitalizations stood at 519, with 101 in intensive care units, the province reported.

Only Ontario has seen a higher total number of reported cases, with 323,509 total cases reported since the outbreak of the global pandemic.

Also in Quebec, a targeted vaccination campaign is being launched to inoculate parents of school- and daycare-aged children in Montreal’s Côte Saint-Luc and Snowdon areas.

In the Prairie provinces, Manitoba reported 91 new cases of COVID-19 on Thursday and also one death.

The Manitoba government also moved to reduce the minimum age for COVID-19 vaccines by two years — to 53 and up for First Nations people, and 73 and up for others. Those numbers do not include younger age groups with underlying health conditions that are already eligible for vaccination.

Saskatchewan’s COVID-19 vaccine delivery plan is two weeks ahead of schedule. The province is entering Phase 2 of its plan. Anyone in Saskatchewan 67 or older can book a vaccinatiin appointment online or by phone. T

Across the North, Nunavut will now count 12 additional cases of COVID-19, including three deaths, in the territory’s total case count. The new numbers come from Nunavut residents who caught COVID-19 or died from the virus while in Manitoba.

Nunavut Chief Public Health Officer Dr. Michael Patterson said it’s been unclear since the start of the pandemic which jurisdiction these numbers would fall under. The cases and deaths occurred between December 2020 and January 2021. Patterson said attribution of cases of COVID-19 acquired outside the territory will continue to occur on a case-by-case basis.

There were no new cases reported in Yukon or the Northwest Territories on Wednesday.

-From The Canadian Press and CBC News, last updated at 3 p.m. ET

As of early Thursday evening, more than 121.7 million cases of COVID-19 had been reported worldwide, according to a tracking tool maintained by Johns Hopkins University. The global death toll stood at more than 2.6 million.

With the world watching, the European Medicines Agency on Thursday said the benefits of the AstraZeneca-Oxford vaccine still outweigh any risks, even though it hasn’t been able to fully rule out a link between the vaccine and a small number of patients who developed two specific types of rare blood clots after getting it.

In Africa, the head of the Africa Centers for Disease Control and Prevention says the suspension of the AstraZeneca COVID-19 vaccine in some European Union nations hurts efforts to build public confidence and trust in vaccines on the continent of 1.3 billion people.

John Nkengasong said in a briefing Thursday that despite “unfortunate events” in Europe, African nations should continue rolling out the AstraZeneca vaccine, the only shot currently available in many countries that have accessed batches of it through the COVAX initiative.

At least 22 of Africa’s 54 nations have received more than 14 million doses of the AstraZeneca vaccine as of March 13, according to the World Health Organization.

The World Health Organization has also said the benefits of the vaccine outweigh any risks and recommends its continued use.

In Europe, Italy inaugurated a living monument to its COVID-19 dead Thursday as it marked the anniversary of one of the most haunting moments of the pandemic: when Bergamo’s death toll reached such heights that an army convoy had to transport coffins out because its cemeteries and crematoriums were full.

Premier Mario Draghi visited the northern city on Thursday to commemorate a national day of mourning for Italy’s coronavirus victims. Flags flew at half-mast around the country and public authorities observed a minute of silence.

Draghi laid a wreath at Bergamo’s cemetery and inaugurated a forest named in honour of the more than 100,000 victims in Italy, the first country in the West to be hit by the outbreak.

“This wood doesn’t only contain only the memory of the many victims,” Draghi said. “This place is a symbol of the pain of an entire nation.”

The anniversary came as much of Italy, including Bergamo, is under a new lockdown and as Italy’s halting vaccination campaign has slowed down further because of the suspension of AstraZeneca shots pending review.

The French government has backed off from ordering a tough lockdown for Paris and several other regions despite an increasingly alarming situation at hospitals seeing a rise in the number of COVID-19 patients.

Instead, it announced a patchwork of new restrictions Thursday while reducing the national curfew by one hour. People living in the Paris region and in the north of the country can walk as long as they like within a 10-kilometre radius of their homes. Stores, however, will feel the pinch with a new rule closing all non-essential shops. Schools remain open.

In Bosnia and Herzegovina, an ongoing surge in new coronavirus cases saw the country reporting 1,700 new cases on Thursday, well above the few hundred daily cases it was seeing just weeks ago.

In the Asia-Pacific region, India and Pakistan reported a big jump in new coronavirus infections on Thursday, driven by a resurgence in cases in their richest states.

In efforts to curb the spread of COVID-19, Punjab state in India extended a night curfew across nine districts and the New Delhi city government announced an increase of vaccinations to 125,000 doses per day from around 40,000 at present, officials said.

Local authorities in the Indian state of Odisha sought additional vaccine doses, and in Gujarat, Prime Minister Narendra Modi’s home state, authorities ordered schools and colleges to be shut across eight administrative divisions until April 10. Officials in India have blamed the surge in infections mainly on crowding and a reluctance to wear masks. Pakistan says the coronavirus variant first found in Britain may also be a factor.

India’s total cases stood at 11.47 million, the highest after the United States and Brazil. Deaths rose by 172 to 159,216, according to health ministry data on Thursday.

In Pakistan, 3,495 people tested positive in the past 24 hours, the most daily infections since early December. Total cases passed 615,000. Deaths rose by 61 to 13,717. Most of the new cases came from Pakistan’s largest and richest province, Punjab.

Pakistani minister Asad Umar said hospital beds were filling fast, and warned of stricter curbs if rules were not followed.

In the Americas, Paraguayan opposition lawmakers lost a bid to impeach President Mario Abdo over the government’s handling of the pandemic.

The United States is investing $12.25 billion US to ramp up COVID-19 testing to help schools reopen safely and promote testing equity among high-risk and under-served populations.

-From The Associated Press and Reuters, last updated at 5:25 p.m. ET

Prince William pays tribute to Prince Philip: ‘I will miss my grandpa’

Why Scott Pilgrim Is Still One Of The Best 2D Brawlers

B.C. woman relieved she won’t need to quarantine every time she...

Ricciardo: ‘Give Marko a hug, see how he handles it’