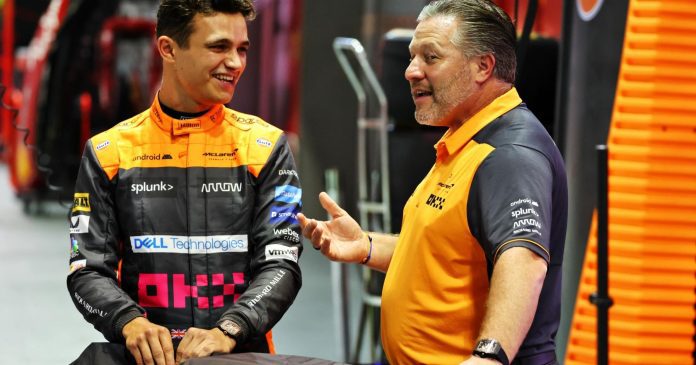 Zak Brown has admitted that the one thing about Lando Norris that occasionally “frustrates” him is the Briton’s punctuality.

Norris has become one of the standout younger drivers on the grid in recent years, having already claimed a pole position and six podiums since joining McLaren in 2019.

Heading into his fifth season in Formula 1, the 23-year-old will be hoping to continue to challenge for podiums and finish in the top five, establishing himself as the team leader with new teammate Oscar Piastri.

Despite the partnership with McLaren being successful so far, Norris has occasionally irritated boss Brown when it comes to his time-keeping.

Brown: Norris will be champion one day

“What frustrates me about Lando?” said Brown in an interview with GQ magazine.

It’s a minor problem for the team boss though, who insists that Norris is very good at integrating himself within the team and has matured since joining.

He added: “The great thing about him is he is very honest and owns everything. And he’s definitely improved.”

Norris’ calm nature is the thing that has impressed Brown the most, with the team CEO believing that his driver will be World Champion within the next “10 to 15 years” of his career.

“When he first went up against Fernando Alonso, it was like another day at the office,” Brown explained.

“I think that calmness and coolness is why he’s so consistent.

“He takes the things that he needs to take seriously, very seriously. But he also knows that we’re in a fun business, racing cars.”

Jamie Chadwick needs to go to F3 ‘at some point’