An innovative timber theatre for a small school in Berkshire by Jonathan Tuckey Design will be transformational for the school and its pupils, writes Veronica Simpson

Jonathan Tuckey Design (JTD) has established a strong track record for sensitive interventions and extensions to existing buildings – a skill that has never felt more relevant or important than in our current environmentally and economically-afflicted times. And that desire to ameliorate or enhance what is already there still rings true for the practice’s first stand-alone, new-build structure: a beautiful, bespoke theatre at the heart of a school in Berkshire.

Horris Hill School is tiny: just 130 pupils, aged from four to 13. It’s a private preparatory boys school, for day pupils and boarders, set within private grounds with extensive parkland. Unlike some of its neighbouring private schools – Wellington College, for example – it is not blessed with any impressive architectural frontages. The majority of buildings are unremarkable, functional, low-level red-brick structures accrued over the last 50 years, apart from the shed-like sports hall, which was added most recently. So the beautiful, red, timber theatre that JTD has designed for the school is remarkable on many fronts.

Planted to the south of the campus, flanked by playing fields and wooded pastures on one side, but otherwise surrounded by the school’s mixed bag of buildings, the new David Brownlow Theatre (named after its primary benefactor) transforms what was previously a featureless car park, with added prefabs, into a town square. 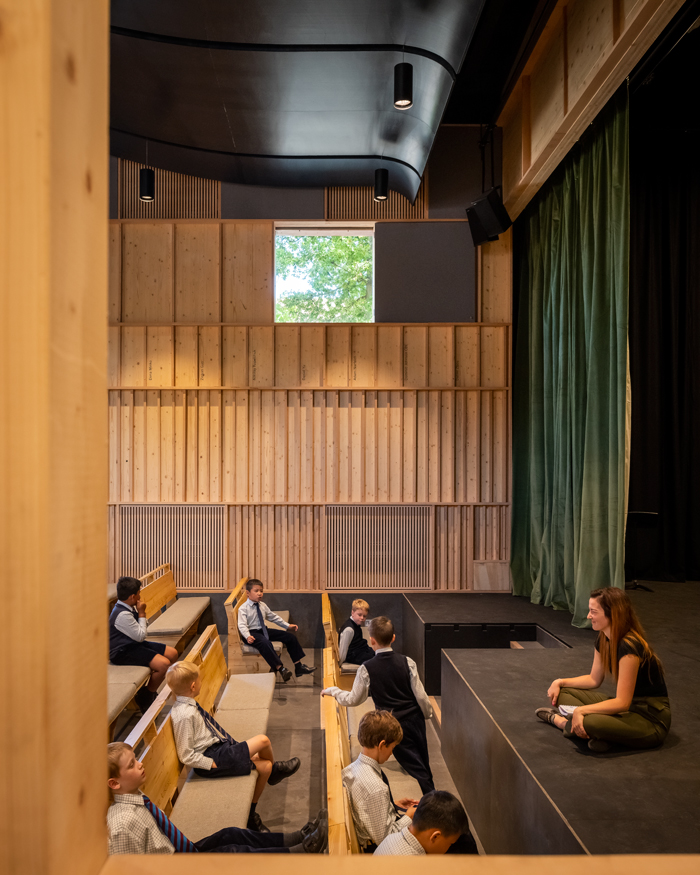 The auditorium seats 160 people, with a stage close enough to remain intimate for assemblies and performances. Image Credit:Jim Stephenson

Made from cross laminated timber (CLT), prefabricated in Austria, it is clad in russet-toned wood fibre panels – their hues entirely sympathetic to the natural setting and the adjacent red-brick classroom blocks – to create a richer, more three-dimensional appearance, and also allow for passive ventilation via both mechanised and openable windows. Erected in four days over the summer holidays of 2020 by four carpenters, with the inside also hand-built by the same team, it’s no wonder the theatre feels like a piece of finely crafted, bespoke, inhabitable furniture.

The 160-seat auditorium and performance space is dominated by a large proscenium stage, big enough to hold 120 pupils, but close enough to the bench seating for headmaster Giles Tollit to feel an easy connection with the audience when giving assemblies, or when their roster of visiting speakers are onstage; curtains can collapse or expand the stage as required. Tuckey’s team worked closely with theatre specialists Charcoalblue to get the right configuration of stage and seating, including a large technical balcony big enough for teaching small groups how to use the A/V and lighting technology.

The acoustics are excellent, thanks to a combination of deep blue undulating ceiling panels and grey acoustic wall panels. Little, if any, amplification will be required, making the space feel even more friendly and welcoming – two characteristics Tollit felt were essential to this space. There is also a charmingly unfinished quality to the interior, thanks to the untreated CLT frame, which is left exposed, and the robust benches (larch, CNC-cut to JTD’s designs and assembled on-site). It feels like a working, evolutionary building integral to the pupils’ growth. The large timber frame that fronts on to the ‘town square’ also has that enticing, unfinished quality: a frame over which to drape banners advertising individual productions, or to be used as a projection screen or whatever the pupil’s might desire.

It is immensely appealing – and rare – to sit in such an effective, high-quality performance space and be able to look out of the windows, engaging with shifts in weather or seasons, or through the glazed side door at the life of the school. These glimpses beyond the theatre seem like a wise and benign strategy to calm the distracted young listener. And the pupils seem to have absorbed and adopted this new civic space, incorporating it into their daily routines, gathering around the informal outdoor amphitheatre (a few benches overlooking the fields to the south), or around the new town square at break times.

Making a theatre and performance space the most architecturally significant structure on the campus is a gesture that will have strong practical, educational and cultural ramifications. Tollit was convinced that a proper performance space – rather than the sports hall, where assemblies and events were previously held – would be massively beneficial to the pupils’ oratory skills and, above all, their confidence. But it was Tuckey’s understanding of the micro and macro contexts of the design that helped them to win the invited competition in 2016. 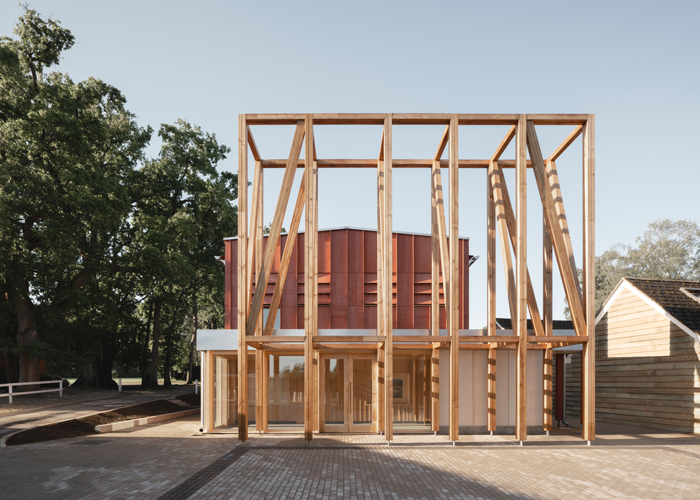 The exterior timber frame, on which can be draped advertisements for productions or a white canvas for video projection. Image Credit:Jim Stephenson

It was a leap of faith for both parties, however. As Tuckey says, ‘We had never done anything in education at that time, and had never done a theatre. We hadn’t done a new building. But we thought, “Let’s have a go and see what we come up with.” Something about our proposal ignited their enthusiasm. We had this notion early on that it wasn’t just going to be a theatre.’ He saw the school as a town, and the theatre as its centre.

Tuckey – who studied social anthropology before design – understood Tollit’s view of the role that the performing arts can play in the health of a community. ‘He’s a former classics scholar,’ says Tuckey. ‘He felt that theatre has such an important role in the life of a community. Here, you can act out all the things you are not permitted to do in public life – fall in love with the wrong person, kill someone to avenge your family, etc. In a pupil’s education that’s really important. Boarding school is such a closed community, so having that sort of release is really important.’

Tollit is clearly delighted with this new space and the way it reflects the school’s values. ‘Drama and performance has always been a big thing at Horris Hill,’ he says, ‘yet there was nothing to demonstrate that commitment.’ But there are also immediate impacts on behaviour, ‘From my perspective, the way the boys are as an audience has completely changed. In the sports hall they had to sit on the floor, and found it hard not to be distracted. Here, the focus and the quality of the interaction between them and our guests has been brilliant.’

The Davidson Prize announces three finalists for its inaugural year

If Only: Rob Neal of Wright and Wright architects