Two days out from the inauguration, U.S. president-elect Joe Biden and vice-president-elect Kamala Harris joined Martin Luther King Jr. Day service projects on Monday as a militarized and jittery Washington, D.C., prepared for a swearing-in that will play out under extraordinary security.

Biden and his wife, Jill, joined an assembly line in the parking lot of Philabundance, an organization that distributes food to people in need in Philadelphia, and helped fill about 150 boxes with fresh fruit and non-perishables.

As Biden and Harris took breaks from their inaugural preparations to honour the civil rights hero, outgoing President Donald Trump remained out of public view at the White House for the sixth straight day. In past years, Trump has marked the holiday with unannounced visits to the King memorial in Washington, but no such outing was expected this year.

Such a visit would have been complicated this year since Washington has become a fortress city of roadblocks and barricades ahead of Wednesday’s inauguration as security officials work to avoid more violence following the Jan. 6 attack on the U.S. Capitol by a pro-Trump mob.

In a measure of how jittery the capital city has become, U.S. Capitol Police on Monday briefly locked down the Capitol complex and paused inaugural rehearsals after a small explosion at a nearby homeless encampment. Authorities urged staff working inside the complex to stay away from exterior windows and those outside the building to take cover as they briefly prohibited entry and exit from the campus “out of an abundance of caution.”

The Bidens were joined in their service project by their daughter, Ashley Biden, granddaughter Finnegan Biden and Peter Neal, who is dating another Biden granddaughter.

Harris and her husband, Doug Emhoff, were scheduled to take part in a National Day of Service event in Washington. Harris was expected to resign her U.S. Senate seat on Monday afternoon.

More than 20,000 National Guard troops were being dispatched across the city to bolster security. Monuments — including the King memorial — are closed to the public until after Wednesday’s inaugural events.

‘We are causing too much harm to one another’

In Atlanta, speakers at the annual Martin Luther King Jr. holiday celebration called for a renewed dedication to non-violence following a turbulent year in which a deadly pandemic, protests over systemic racism and a divisive election capped by the siege of the U.S. Capitol strained Americans’ capacity for civility.

“This King holiday has not only come at a time of great peril and physical violence, it has also come during a time of violence in our speech — what we say and how we say it,” said Rev. Bernice King, the slain civil rights leader’s daughter. “It is frankly out of control and we are causing too much harm to one another.” 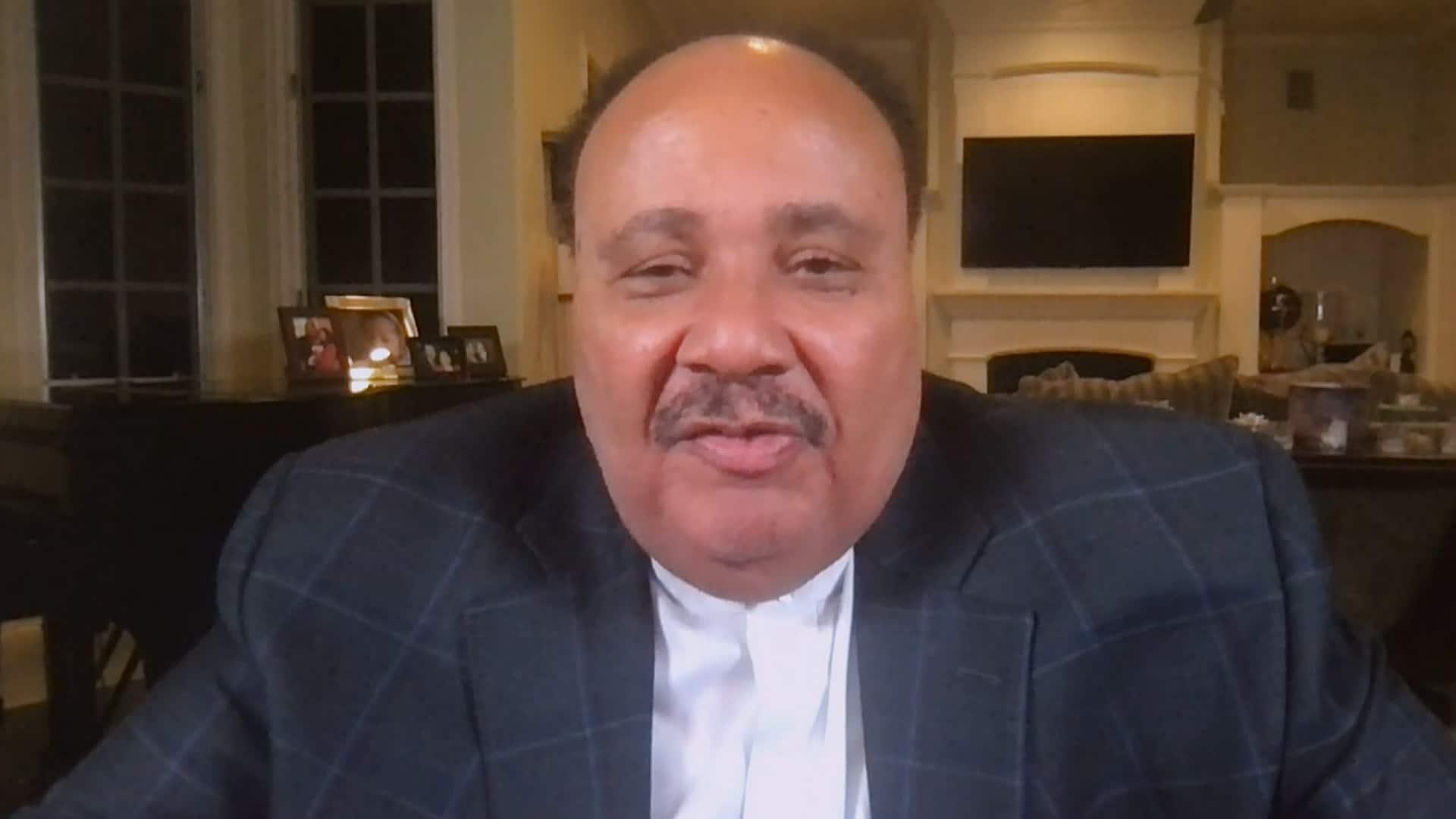 We speak to Global human rights leader Martin Luther King III about his reaction to last Wednesday’s riots in Washington and his thoughts on the next presidency. 10:31

The coronavirus pandemic forced the annual King Day service at Atlanta’s Ebenezer Baptist Church online during the 35th celebration of his birthday as a national holiday. His family was among a sparse group wearing masks and sitting far apart amid mostly empty pews as others delivered remarks remotely.

Bernice King said the toll of the pandemic, lingering outrage over killings of unarmed Black people and the deadly attack in Washington by Trump supporters all underscore an urgent need to pursue what her father called “the beloved community” — a world in which conflict is solved non-violently and compassion dictates policy.

“There is such a thing as being too late,” she said, quoting her father’s words from more than 50 years ago.

“We still have a choice today: non-violent co-existence or violent co-annihilation,” Bernice King said, again reciting the words of her father. “This may well be mankind’s last chance to choose between chaos and community.”

Rev. Raphael Warnock, the pastor at Ebenezer Baptist Church who won a Senate run-off election in Georgia on Jan. 5, appealed for unity.

“Let us stand together, let us work together,” Warnock said, calling the COVID-19 pandemic a reminder that all people are “tied together, as Dr. King said, in a single garment of destiny.”

“Because we’re dealing with a deadly airborne disease, my neighbour coughs and I’m imperilled by the cough of my neighbour,” Warnock said. “That doesn’t make my neighbour my enemy. That means that our destiny is tied together.”

Martin Luther King Jr. was assassinated on April 4, 1968, while supporting striking sanitation workers in Memphis, Tenn. Last Friday would have been his 92nd birthday.

Watch The Medium’s Spooky 14-Minute Gameplay Demo Ahead Of Its January...

Dragon Age 2 Was A Phenomenal Game Buried Beneath Repetition And...