Upstairs is a light and bright canteen-style pizza restaurant; downstairs is a rich and sensual late-night speakeasy. Behind the design of them both is north-west London-based architectural practice dMFK and its founding director Julian de Metz.

The two-part project, completed last year, was commissioned by the team behind the Spiritland music lovers’ spaces: BBC Radio producer Paul Noble, and co-founders of Canteen restaurants Patrick Clayton- Malone and Dominic Lake. Happy Face is on the ground floor of the 11-storey R7 building in King’s Cross, directly under the raked floor of an Everyman cinema, while Supermax sits in the basement, accessed by a deliberately concealed entrance behind the pizza restaurant kitchen. 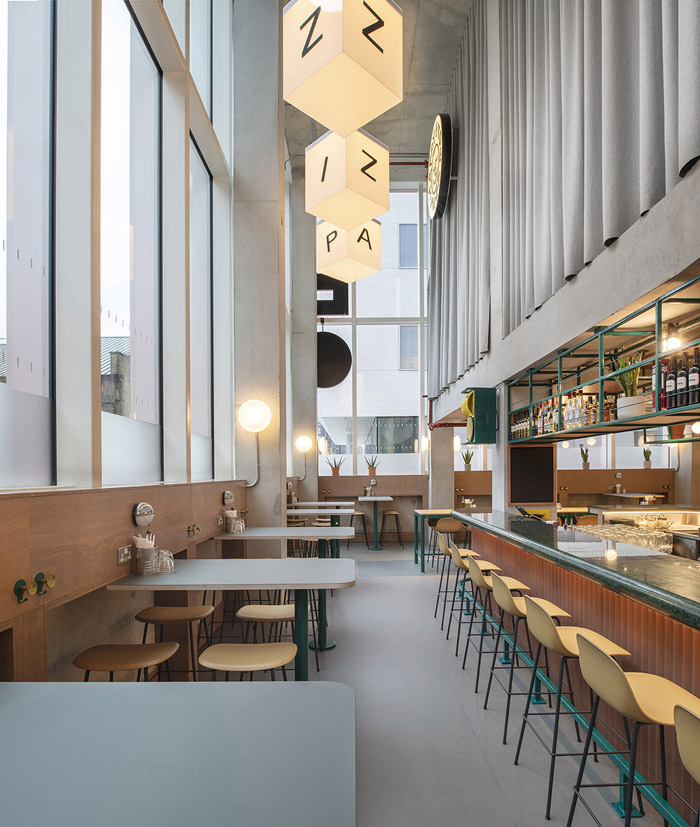 The R7 building, completed by Duggan Morris Architects in 2017, is known for the striking Millennial Pink colouring of its powder-coated aluminium façade. ‘It’s a visually imposing building and required a careful response,’ explains de Metz, who selected tones of pinky beige, natural birch ply and accents of dark green for Happy Face, to work with the colourful exterior. The result is a lively, canteen-style space that welcomes visitors for breakfast and morning coffee right through to late-night snacks.

‘The lighting is very bright, but is quite sophisticated so it changes through the day and into the night,’ says de Metz. ‘It’s a fast-turnaround environment, but more luxurious than other fast pizza restaurants. The brief was to create somewhere you could go on a date one day and take your grandma to the next day.’ 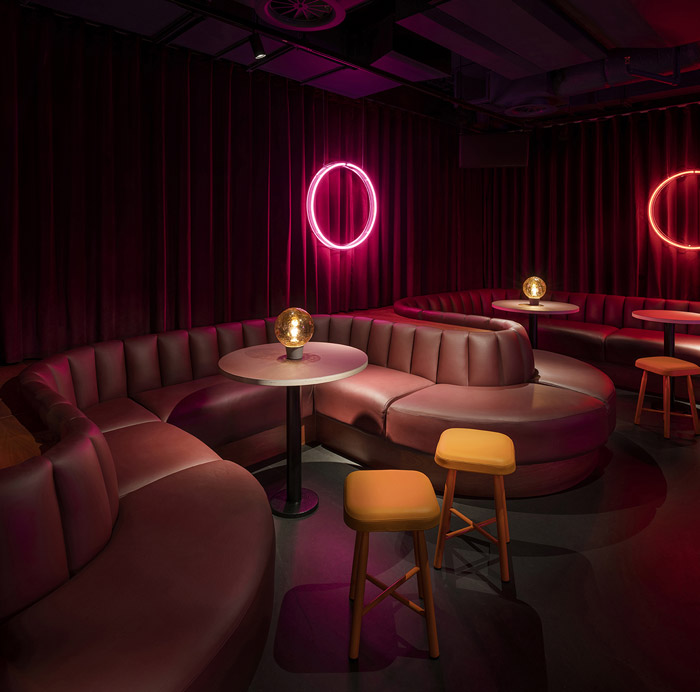 Happy Face had a relatively tight budget for decorative elements, as most of the money was earmarked for kitchen equipment, including a 6ft, 2t pizza oven. This meant choosing hard-wearing but reasonably priced finishes such as painted steel and birch ply, and making the occasional necessary compromise, such as lino floors rather than polished concrete. ‘The money was spent on key elements such as the Italian marble bar top,’ notes de Metz. ‘Where you need to touch things, there is quality.’ The bar, with its corrugated, terracotta-coloured tile sides, acts as a focal point in the bustling restaurant.

While Spiritland projects have previously been aimed at a high-end audiophile audience, Happy Face is exuberantly accessible, with sub-£7 pizzas and £5 cocktails. ‘The client was looking for a welcoming, non-exclusive, affordable tone which communicated good value while offering a quality dining experience,’ says de Metz.

Yet just a few steps away from the teenagers munching garlic bread, down a discreetly hidden staircase, lies Supermax; a luscious, subterranean venue for late night dancing and drinking, with sinuous deep red banquettes and atmospheric neon lighting. The idea to make the venue semi-secret was partly inspired by Please Don’t Tell, a Manhattan bar where entry is through a phone box in a hot dog joint, creating a sense of exclusivity and mystique.

‘Supermax is completely unadvertised,’ explains de Metz. ‘It is found by walking past the kitchen of Happy Face and down a dimly lit staircase led by thumping bass. In terms of impact, it is deliberately obscure and finds its inspiration in the speakeasy joints in NYC, made busy by word of mouth and conceived as a seemingly secret destination – a naughty spot where customers can let their hair down, drink and dance until late.’

The whole ambience of Supermax is a world away from the lively bustle of Happy Face. ‘We wanted it to really contrast with upstairs, so we chose the deep red with purple accents,’ says de Metz. ‘Neon circles provide low level lighting that gives a private, warm feel to the space, while deep velvet curtains hide sound-absorbing panels, so the acoustics and music sound superb.’ The shape of the fluted leather banquettes is designed to provide both privacy and a social environment, so small groups can talk together while also interacting with those sitting on the ends of the curves. ‘The venue is small enough to be sociable, so by the end of the night everyone knows each other,’ says de Metz. 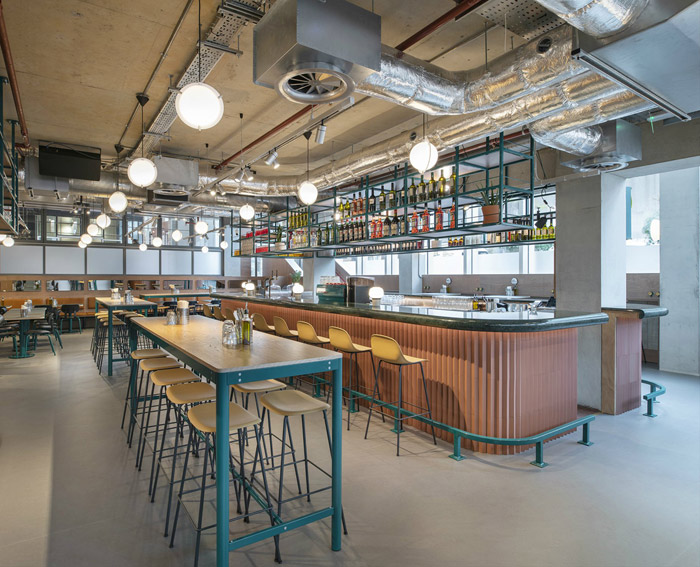 While the marble bar provides the focal point upstairs, in Supermax the bar is a hand-polished terrazzo, with giant chips of mustard yellow that pick up the colours of the bar stools and the giant speakers of the bespoke Spiritland sound system behind the bar. According to de Metz: ‘It’s designed to tell you to get up and dance!’

While your gran may finish up her tiramisu and go home without knowing the delights down the staircase, the combination of the two venues has been carefully designed to offer the potential of a whole evening’s entertainment in one place. ‘The contrast of the two completely different designs offers something accessible and affordable at ground level, combined with a bar that can be either combined or completely separated,’ says de Metz. ‘This combination of vibes offers a unique facility where guests can dine and party without moving venues.’

Karen masks for Halloween are racist and a step too far

Andrews assumed the home quarantine powers would be used in hotels

Academy of Country Music Awards sober up amid COVID-19

Elvis Presley affair: ‘It had to end’ – Ann-Margret speaks out...

The Beatles: John Lennon White Album song was written when he...

Parkinson’s disease: The peculiar warning sign which lies in the way...

PIP point system: How many points do you have to score...

One to Watch: EBBA Architects