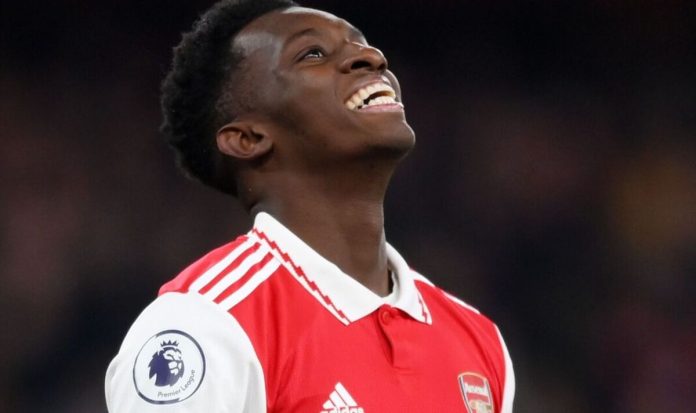 Arsenal once again had the answers as their Premier League title credentials were put to the test as Eddie Nketiah came up trumps with a late winner to earn the Gunners all three points against Manchester United. Having trailed to Marcus Rashford’s opener, Mikel Arteta’s defiant side showed their mettle to edge a five-goal thriller – a match that was one of the best of the Premier League season thus far. Express Sport analyses four things we learned from an Arsenal perspective.

Gabriel Jesus came to Arsenal to be their main man in attack after growing tired of Pep Guardiola’s rotation at Manchester City.

Yet when he returns from his knee injury, there can simply be no guarantees he will return straight back into Mikel Arteta’s starting XI.

Eddie Nketiah has been devastating. He has surprised everyone and made a real statement since replacing the Brazilian in attack for the Gunners to show that he is the man of the moment in their Premier League title challenge.

He was on target not once but twice to be the match-winner for Arsenal, taking both of his goals brilliantly.

His open was really impressive as he powered home a headed equaliser in the first half before adjusting to help home the winner with a proper striker’s goal.

Arsenal’s title charge would not have been the same without him. He is proving everyone wrong after many said he wasn’t good enough to keep their hunt alive.

Nketiah was also excellent in the 2-0 win at Tottenham last weekend, which shows he is more than capable of stepping up to the plate in games of the highest magnitude.

It’s not just about the goals either. He is always pressing, charging around, linking the play and making selfless runs that create space for his team-mates.

Bukayo Saka is a phenomenal talent but his breathtaking long-range drive was something we haven’t really seen from him before.

It just shows that he is continuing to improve and sharpen his game despite his incredible rise to stardom.

Saka is such an effective attacker when he has the ball at his feet in the final third. He rarely gives it away and he always picks the right option.

That’s why there was a real element of surprise when he ignored the chance to turn over the ball and let fly from 25 yards.

There was just no stopping that strike and there was a sense that it was going to fly in as soon as it left his book.

The 21-year-old is going to be one of the best forwards in world football and Arsenal must now prioritise tying him down to a new contract.

The signing of Leandro Trossard could prove to be a kick up the backside for Gabriel Martinelli.

He looks sharp in patches but his finishing is just not up to scratch at the moment.

There were a few times in the first half when he lashed at the ball in glorious areas.

More composure could have seen him find the net, something he was doing regularly earlier in the season.

Martinelli still looks very dangerous and now he knows he will have to continue performing or he could lose his place in the side.

A bit of extra shooting work on the training ground would go amiss in the coming weeks with Martinelli seemingly lacking confidence in front of goal.

He appears to be snatching at chances as opposed to picking his corner but ultimately, there are still positives in the way he is getting clear openings.

Animated tactician Mikel Arteta is refusing to tone down his touchline antics despite a meeting amongst Premier League officials in recent weeks.

League chiefs have allegedly been discussing the conduct of managers on the touchline and plenty has been made of Arteta’s behaviour of late.

Richard Keys called out the Spaniard following his explosive showing in the 0-0 draw with Newcastle earlier in the month and he has remained hot on Arteta ever since.

The Arsenal boss was at it again today as he campaigned for Anthony Taylor to book Luke Shaw following a foul on Saka.

He did get his wish but Arteta was later booked by the referee much to his disapproval.