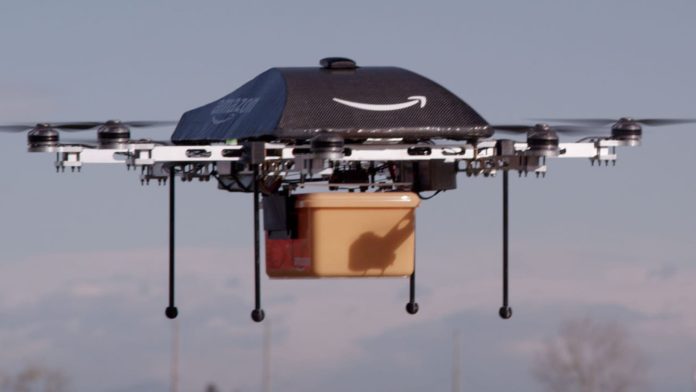 In 2013, Amazon founder Jeff Bezos appeared on CBS’ “60 Minutes” to reveal a futuristic plan his company had been secretly pursuing to deliver packages by drone in 30 minutes.

A pre-recorded demo showed an Amazon-branded “octocopter” carrying a small package off a conveyor belt and into the skies to a customer’s home, landing smoothly in the backyard, dropping off the item and then whizzing away. Bezos predicted a fleet of Amazon drones could take to the skies within five years and said, “it’s going to be a lot of fun.”

A decade later, Amazon is finally starting to launch drone deliveries in two small markets through a program called Prime Air. But just as it’s finally getting off the ground, the drone program is running squarely into a sputtering economy and CEO Andy Jassy’s widespread cost-cutting efforts.

CNBC has learned that, as part of Amazon’s plan to slash 18,000 jobs, its biggest headcount reduction in history, Prime Air is losing a significant number of employees. Sources familiar with the matter who asked not to be named for confidentiality said they learned about the Prime Air cuts on Wednesday, when two senior Amazon executives sent emails to employees notifying them that those impacted by the layoffs would be informed shortly. One person realized what was happening when they could no longer access Slack.

Staffers were let go across multiple sites, including Seattle, where Amazon is headquartered. Amazon’s drone test site in Pendleton, Oregon, was hit particularly hard, with half of the team being let go, one Prime Air employee wrote in a LinkedIn post, which he subsequently deleted.

Amazon declined to say how many Prime Air employees were laid off, and a spokesperson pointed back to Jassy’s blog post from earlier this month announcing the companywide cuts.

Jassy has resorted to trimming Amazon’s headcount, which grew massively during the Covid-19 pandemic, as he looks for ways to curtail expenses across the company. As part of his review, Jassy has zeroed in on some of Amazon’s more unproven bets, such as its Alexa, physical stores and robotics divisions. Now Prime Air is being added to the list of targets.

For Bezos, the staff reductions mark the latest setback in an ambitious project that’s been plagued with challenges.

Amazon spent years testing the drone technology in the English countryside to help Bezos realize his vision of even speedier delivery, dropping off some products without having to solely rely on gas-guzzling vehicles clogging up neighborhood roads.

However, the company scaled back its drone operations in the U.K. According to a 2021 story in Wired, Prime Air teams tasked with labeling drone footage raised concerns of managerial dysfunction.

Then in 2019, Jeff Wilke, who was Amazon’s consumer chief at the time, announced drones would be in operation “within months.” A year later, the Federal Aviation Administration gave the company approval to start trialing drone deliveries.

But doubts about the viability of the drones emerged after the Prime Air unit suffered high turnover and employees said they were pressured to reach ambitious internal targets, sometimes at the risk of safety, according to Bloomberg. Employee departures accelerated after there were multiple crashes at Prime Air’s test site in Pendleton. One incident in June 2021 sparked a 20-acre fire, Insider reported.

“No one has ever been injured or harmed as a result of these flights, and each test is done in compliance with all applicable regulations,” Av Zammit, an Amazon spokesperson, said in an e-mailed statement.

Liftoff finally appeared imminent in 2023. Prime Air head David Carbon, a former Boeing executive who Amazon brought on in 2020, told reporters at an event in November of last year that by the end of the decade, the company had a goal of delivering 500 million packages by drone annually to millions of customers in major cities like Seattle, Boston and Atlanta. Carbon showed off a drone concept Amazon could begin using in 2024 that’s smaller and quieter than its current model.

Now, as Prime Air embarks on its most high-stakes real world experiment to date, the parent company is reckoning with slowing growth and macroeconomic headwinds. Jassy said in his announcement about layoffs this month that company leaders are “prioritizing what matters most to customers and the long-term health of our businesses.”

Sources with knowledge of Prime Air said cuts in the drone delivery business were expected considering the division’s many struggles. Employees in the design, maintenance, systems engineering, flight testing and flight operations units were part of the layoffs, the sources said.

“We will gradually expand deliveries to more customers in those areas over time,” Zammit said. “Our team is also continuing to work on the development of our next-generation drone system.”

Drones in the neighborhood

In College Station, a city about 100 miles northwest of Houston that’s home to Texas A&M University, an Amazon drone delivery center sits just off a state highway, tucked behind a row of car dealerships. At the warehouse on site, all goods must weight five pounds or less.

Four launch and landing pads occupy the grounds, where unmanned aircrafts will be dispatched to take goods to residents in a handful of suburban neighborhoods located within a few miles of the facility.

Lockeford is a town of 3,500 people, south of Sacramento. An Amazon executive said in July that after looking at locations across the country, Amazon chose these two markets because of their demographics and topography.

Nina Rinchich is one of the residents in the College Station area who signed up to try Prime Air. About a month ago, an Amazon employee visited her home in Edelweiss Gartens, a subdivision a few miles south of Amazon’s drone facility.

Prime Air test participants were given a QR-code like tile that instructs the drone where to land.

Rinchich said she’s always embraced new technologies and loves the idea of added convenience. She has a smart TV, an Echo speaker and smart light bulbs in her home.

“Anything that makes my life easier is a good thing,” Rinchich said.

Participation in the service requires a Prime membership. Residents also have to live within roughly four miles of the Amazon facility, and their yard has to meet certain specifications, such as being clear of power lines or trees that might obstruct the drone’s flight path. To entice potential participants, Amazon is offering them up to $100 worth of gift cards.

Once a person signs up, an Amazon employee comes out to measure their backyard. If it meets Amazon’s requirements, the customer is given a tile with a unique QR-like code that helps the drone recognize where to land. The yard should be clear when the drone approaches.

While Rinchich said she signed up “without hesitation,” not everyone in the area shares her enthusiasm.

Some residents of College Station and surrounding towns attended a “meet and greet” session in July, where Amazon displayed a Prime Air drone up close and let people register for the service.

Patrick Williams, a software engineering consultant, took his 12-year-old daughter, Monica. They live in a rural area called Foxfire, less than two miles by car from the Amazon facility. Monica Williams told CNBC that the size of the drone took her by surprise. Each one is about 6.5 feet wide and almost 4 feet tall, weighing 87 pounds. That’s with nothing on board.

Monica Williams, a College Station resident, poses with a Prime Air drone at a community event in July.

“It was maybe twice the size of me, or three times. It was huge,” Monica said. “That just makes me nervous to have something that big flying above me all of the time.”

The same month as the meet and greet, College Station’s city council held a meeting with Prime Air employees in attendance.

Concerns about safety, privacy and noise were common themes among residents who spoke at the meeting. One person suggested that neighborhood homeowners’ associations consider banning drone deliveries in their communities altogether.

“If I’m a neighbor and I’m nine feet away, is it going to sound like a backfire of a car?” Maloney asked.

“We kind of balk at making direct comparisons to gas powered things,” Cassidy, a former Alaska Airlines pilot, replied. “It’s a whirring noise you’d associate with an electrically powered device that happens to have a propeller attached to it. And it’s for a very short period of time.”

Prime Air drones are not expected to exceed noise levels of 58 decibels at any property line, according to an FAA environmental assessment issued in December. That’s below the threshold outlined in College Station’s daytime noise ordinance, which says noise at the property line must not exceed 63 decibels, or about as loud as an outdoor air conditioning unit, one official said at the meeting.

Amazon tried to ease residents’ fears that there will be constant drone traffic overhead. The company expects to conduct up to 25 flights per day over the area eligible for delivery, which is divided into four different zones.

“It’s a very modest, incremental start and basically that’s the whole purpose of this,” Cassidy said. “To learn through the operational lessons, through the community feedback, through getting direct feedback from our customers on how we can improve the operation.”

Regarding crashes, Cassidy said those incidents are part of the testing process. He said Amazon has high safety standards for the public trials in College Station and Lockeford.

“We sequester that to the test range with our experimental aircraft, and the reason we do that is we can wring all this stuff out before we put it in front of our customers,” he said. “Our obligation is to make sure that the first and the thousandth delivery are all safe.”

College Station residents also expressed concern about the prospect of drones harming the deer, foxes and birds that are native to the area. An FAA review of proposed Prime Air operations in College Station found they were unlikely to disturb wildlife. Amazon also assured the FAA it would monitor the flight area for birds like Bald Eagles and woodpeckers and take avoidance measures if determined to be necessary.

Tyler Tesch, a Google software engineer, registered for Prime Air shortly after moving to College Station. He said he received an email from Amazon earlier this month that required him to agree to Prime Air’s terms and conditions, including staying at least 100 feet clear of the drone or inside the home during a delivery and agreeing not to touch the drone or throw anything at it.

“We will be launching the service in phases to members of your community in the coming months,” the email stated. “As we continue to expand, we will update you when drone delivery is available for your household.”