When I was in college I had a roommate whom I loved dearly, but who had incredibly different taste from me. I whipped cream by hand while she bought a tub of Cool Whip. I drank red wine while she drank fruity vodka concoctions whose names shouldn’t be repeated in polite company.

So, when one day she brought home a bottle of sparkling red wine that she was over the moon about, I was skeptical. Plus, red wine isn’t supposed to be fizzy, right?

What she had was a bottle of cheap Lambrusco: fizzy, cloying, and about on par with a wine cooler as far as complexity of flavor goes. My skepticism was confirmed and my opinion on sparkling red wine was set.

That is, until a number of years later, when I was visiting a family friend of ours who was passing through Vermont. Our friend Karen and her husband Paul own a vineyard in Southern Australia where they make really beautiful handcrafted wines. Karen was on a sales trip in Canada and she popped down into the U.S. so my mom and I could meet up with her to say hello.

She brought us a bottle of sparkling wine that we all split, and I was floored. The difference between this sparkling Shiraz and the Lambrusco I’d tasted half a decade earlier couldn’t have been starker. The Shiraz was effervescent, and awash with a complex mix of inky berry, violet, pepper, and oak flavors.

Just a few months later, my husband and I were at a fantastic restaurant in Boston where our server vigorously recommended we try a dry Lambrusco they had just gotten in. We acquiesced, and I once again I was amazed by the complexity and brilliance of the wine. “Sparkling red wine is bound to become the next big thing here soon,” I thought to myself.

But, it didn’t take off. Pinot Noir, rosé, dry Riesling, and others varieties of wine exploded in turn, but sparkling red wine has continued in relative obscurity. So, what gives?

I think the problem is that while there are wonderful, extremely enjoyable sparkling red wines out there, they can be hard to uncover, and the sparkling red wine selection at even a large, well-stocked liquor store is liable to be a minefield littered with horribly bad wine choices. I spent the last several weeks combing the state of Minnesota for sparkling red wines and so far, I’ve only found a few I actually wanted to drink. Yikes.

But, let’s have a look at the types of sparkling red you’re most likely to run into out there and try to figure out how to navigate.

Lambrusco, which is probably the best-known style of sparkling red wine, is from the Emilia-Romagna region of Italy and is made from the Lambrusco grape. What most people don’t realize is that there is huge variation within the Lambrusco category: Lambrusco can range from cotton candy sweet to bone dry and tannic. A Lambrusco that is secco will not be sweet in the least, while one labeled dolce or semisecco will be quite sweet or semi-sweet respectively (off-dry can also be called amabile).

My friend Chuck, who runs a fantastic wine shop called Solo Vino in the Twin Cities told me another trick for discerning how sweet a Lambrusco: Look at the alcohol content. It’s not a guarantee, but it is a clue. As wine ferments, sugar is converted to alcohol. There’s a tradeoff there, so generally a wine with a lower alcohol content has more residual sugar and will be sweeter (around 6% will be very sweet), while a wine with a higher alcohol content (around 11 percent) will be drier and more tannic—sometimes so tannic that it will give you cotton mouth and you wouldn’t want to pair it with anything but the richest of meals. And in the middle (around 8 percent) is likely to be in the sweetness ballpark of a berry-forward Merlot. 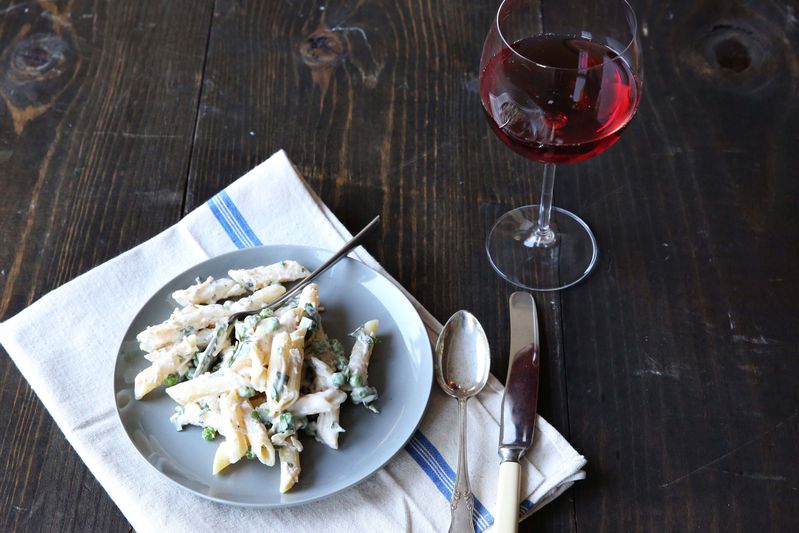 Lambrusco di Sorbara has a pinkish—rather than a deep red—color.

Just like other varieties of wine, there are a couple of different styles of Lambrusco to look out for. To make Lambrusco even more complicated, there are light styles, usually called Lambrusco di Sorbara. You can also tell by looking at them that they are lightly sparkling because they will be pinker in comparison to the deep red of the richer style of Lambrusco known as Grasparossa. Lighter styles will have marked notes of strawberries, raspberries, and rhubarb; I like them on the drier side to keep the fruit from being cloying. On the other hand, I like the Labrusco Grasparossa style to have just a touch of sweetness to keep it from being tannic (tasting a dry Lambrusco Grasparossa can be like taking a sip of black tea that has steeped for a half hour).

My favorite that I tried recently was 8 percent—that is, amabile—from the Cleto Chiarli vineyard, which tasted intensely of raspberries, blackberry jam, dark stone fruit, and violets. Lambruscos that are dry or semi-dry can be fantastic pairings for rich food because both the bubbles and acidity cut through the richness. Pair it with creamy pasta, cheese and meat plates, or Thanksgiving dinner.

Sparkling Shiraz is extraordinarily popular in Australia, at least according to my friend Karen, and is the pre-dinner drink of choice for many people. Like Lambrusco, it can be dry or sweet or in between, but it is not necessarily labeled, so the alcohol content trick can come in handy here. Shiraz has higher alcohol content in general than many varietals, however, so expect them to be in the range of 12.5 percent to 14 percent.

A nice sparkling Shiraz has all the varietal characteristics of a regular Shiraz—deep berry flavors mingling with pepper, anise, hints of herbs, and vanilla, combined with a creaminess and zest from the bubbles. Many of these wines are actually blends of Shiraz and other grape varietals.

The problem with sparkling Shiraz is that much of what is available is cheap Shiraz, produced en masse and suffering from the same faults as any cheap, bad Shiraz: dull, vinegary, unbalanced fruit flavors, all made more punctuated by the presence of bubbles. If you want a sparkling Shiraz worth drinking, you’ll likely have to look in the $30 and up price range, and many liquor stores aren’t willing to carry pricey Australian wines because they don’t think anyone will buy them. But, if you find one, buy it! And serve it slightly chilled as an aperitif or with barbecued meats or rich foods.

This is the final style of sparkling red wine you’re likely to run into in a liquor store, and it brings us back to Italy. It is made in the Piedmont region from Brachetto grapes, and it is always sweet and quite low alcohol, usually around 5 percent. Brachetto d’Acqui is so sweet and candy-like, I consider it a dessert more than I consider it a wine.

The aromas and flavors of Brachetto are reminiscent of strawberries combined with potpourri, and violet pastilles. Think a combination of a Moscato, a berry-rich rosé, and the aromatic lychee flavors of a Gewurztraminer. Because of its sweetness, a Brachetto, like a sweet Lambrusco, should be saved for the end of the meal. It could be a dessert on its own, or you could serve it with something like chocolate cake or cheesecake—or even use it to make an ice cream float. But unlike Lambrusco, which pairs well with salty cheeses and salami, hearty pasta and lasagna, and of course pizza, Brachetto is best with something sweet.

There are a variety of other styles of sparkling red wine floating about out there in the universe of available wine. After all, in the right hands, any red wine could become a sparkling red. Of course, this doesn’t make it any easier to feel confident in making a good choice when looking at sparkling red wines. The best bet, I think, is to talk to someone at a liquor store or a restaurant whose taste and advice in wine you trust, and see if they can steer you towards something fun. Because when it comes down to it, anything with bubbles should be fun. In the meantime, get acquainted with a few of our editors’ favorite sparkling red wines to buy. Not only are they delicious, but they all come in at under $20!

One style of sparkling red wine that we didn’t discuss is Gragnano, aka the perfect pizza wine. I learned about this style of wine at my favorite Neapolitan pizza joint in Astoria, Queens. It’s a crisp, fruit-forward, fizzy wine that is refreshing in summer when I’m dining on the patio and still cozy in the darkness of winter. It never distracts or overpowers the pizza, no matter if I’m sticking to a simple Queen Margherita or going all out with toppings. And the best part is this style is almost always under $20.

This sparkling red wine has fruit flavors of bright, ripe red fruit, like cherries and berries, while still veering towards a dry Lambrusco. It’s a highly-rated $15 bottle from the Emilia-Romagna region of Italy. Its alcohol content hovers around 11 percent, which means that it will be on the drier side.

If you’ve never tried sparkling red wines before, this variety from Cleto Chiarli is a great place to start. Look out for notes of rose petals, orange peel, and ripe red fruit. It has an alcohol content of about 11 percent, which means you can expect it to be dry without veering towards bitter.

Have you ever tried sparkling red wine before? What is your favorite style? Sound off in the comments below!

Art and Architects: Hassell Chooses Their Favourite from Tate Britain

Eruption of La Soufrière volcano in St. Vincent forces thousands from their homes

The Best Pan Liners for Every Kind of Cookie Recipe

Coronavirus: What’s happening in Canada and around the world on June 2